The Brindle Pitbull Is The Ultimate Rainbow Dog 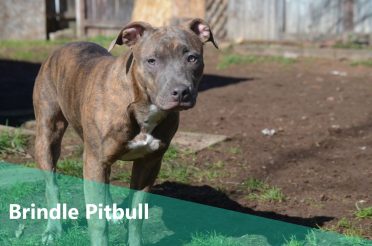 A Brindle Pitbull is either an American Pitbull Terrier or a Staffordshire Terrier or any other bull breed in brindle colors. They’re not a separate breed, most people call them simply Pitbulls. The Brindle Pitbull puppies, usually cost between $800 to $1000, but if you would be interested in adopting it would cost around $250.

Brindle Pitbulls are beautiful creatures inside and out, but unfortunately, news headlines can leave a lasting negative impact on their reputation.

Before we dive into this, keep in mind that Brindle Pitbulls are not a separate breed.

If you’ve already fallen in love with the Pitbull and want one with unique markings, keep reading to find out more information!

History Of The Brindle Pitbull

Often times, when people try to research the Brindle Pitbull on their own, they’re disappointed with the results.

That’s because the American Kennel Club does not recognize the Pitbull (of any color, including brindle) breed using those exact words,

The AKC didn’t want Pitbulls of any kind under their original name due to negative social standing.

Instead, you must search “Brindle American Pitbull Terrier” to get more accurate pages. Confusing, right?

The AKC finally admitted Pitbulls of all colors under the name American Staffordshire Terrier (based on their supposed city of origin) in 1936.

Now, the phrase Brindle Pitbull is sadly overshadowed by the Staffordshire Terrier and American Pitbull Terrier.

You can begin to understand why it’s so hard to search for this breed with such a specific coat.

All About Bully Breeds 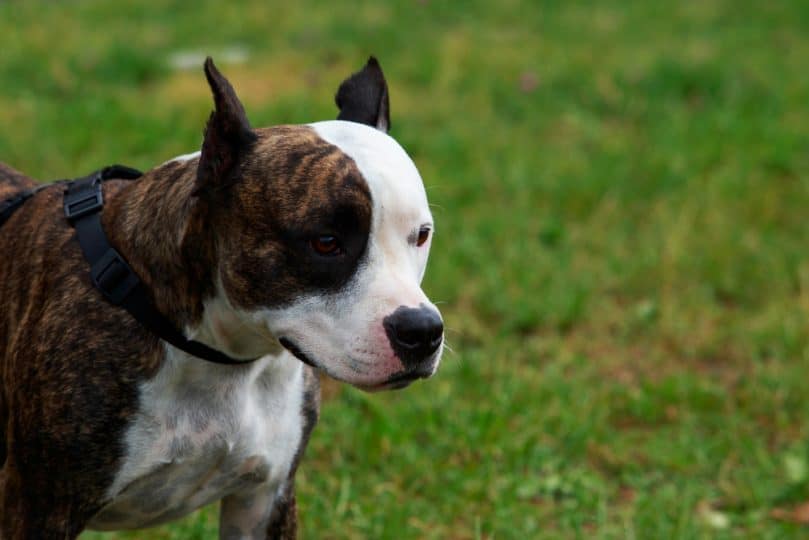 Brindle Pitbulls belong to the Bully family, but what does that mean exactly?

The story of the Bully begins in Ancient Greece with the Molosser dog.

These dogs were known for their big muscles, heavy bones, and short muzzles, similar to the Brindle Pitbull look.

Molossers eventually made their way to England, where they were primarily used for bull-baiting, hence the nickname “bully.”

Bull-baiting is a blood sport that involves pitting a bull against another animal for competition, usually a dog.

Molossers acted on aggression to protect themselves from these bulls, but that’s just their primal instinct kicking in — it has nothing to do with their personality or temperament.

It’s this confusion that has given all Bully breeds, including the Brindle Pitbull, a bad name.

Other Bully breeds include: 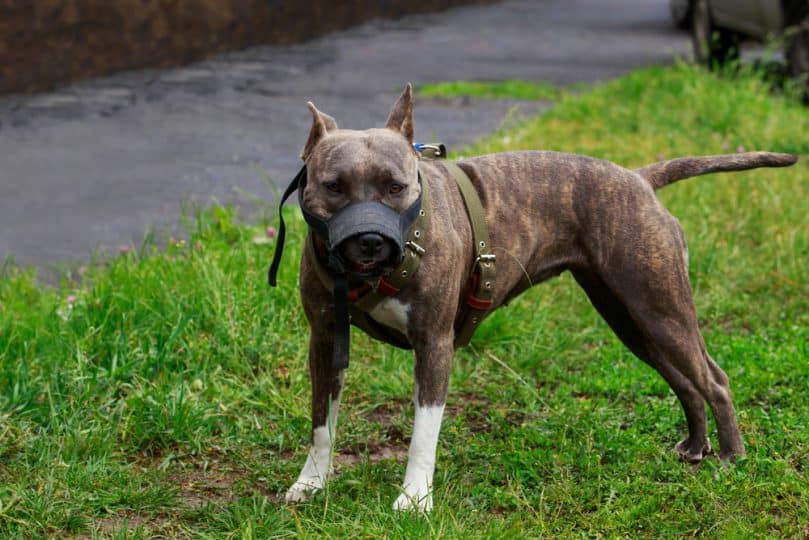 This breed’s bloodline came up a lot during my research.

The Brindle-colored Pitbull can be found as a purebred and a crossbreed.

Although, after multi-generational breeding, its signature coat might get lost as different genes take over.

The brindle gene is recessive.

The markings of a Brindle Pitbull are not specific to this breed. You can find many other dogs with similar coloring. Just to name a few… 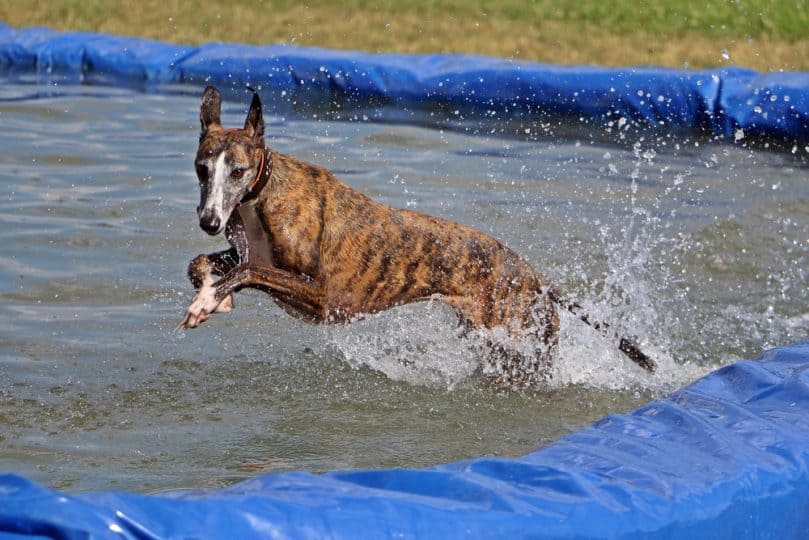 Besides its coat color, there’s nothing physically unique about the Brindle Pitbull.

You can find Brindle Pitbulls with cropped ears and tails. There’s no reason for this practice other than it looks extra tough and intimidating.

With animal cruelty being such a controversial topic these days, many owners are fighting against cropping and taping (to make a dog’s ears stiff). 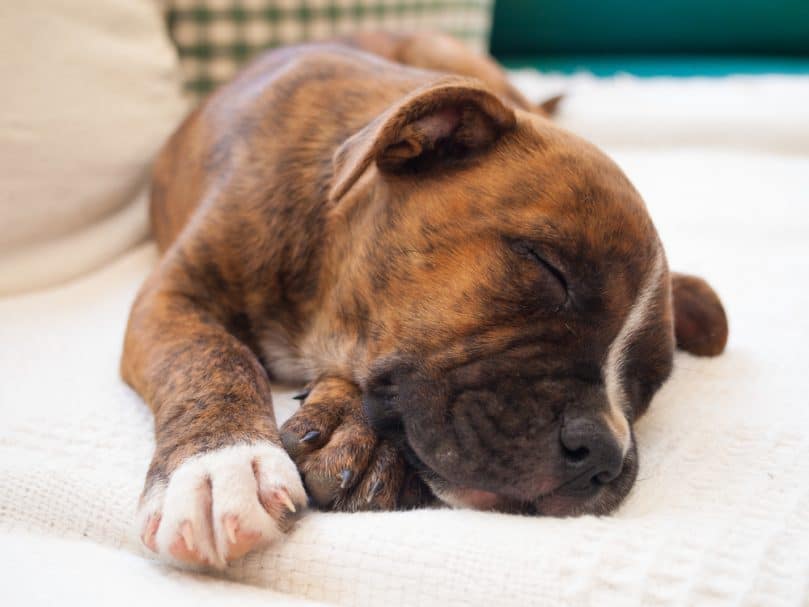 All The Colors Of The Rainbow

Brindle Pitbulls are unique in the brindle dog family (listed above) because their color variations stretch beyond the classic brown and black.

That’s the most common color combination, but they also come in two shades or more of:

All the colors of the rainbow!

These markings also come in reverse brindle and sable brindle.

As a puppy, your Brindle Pitbull might have darker patterns that lighten up as it gets older and spends more time in the sun.

In addition to their coats, the nose can come in red, blue, or black.

Lilac and silver Brindle Pitbulls typically have lighter eyes like blue or green.

Brown and black Brindle Pitbulls tend to have darker eyes to match their coats.

With so many color variations, it’s not rare or hard to find a Pitbull of this pattern. I’ll link some adoption and breeder websites at the end of this article. 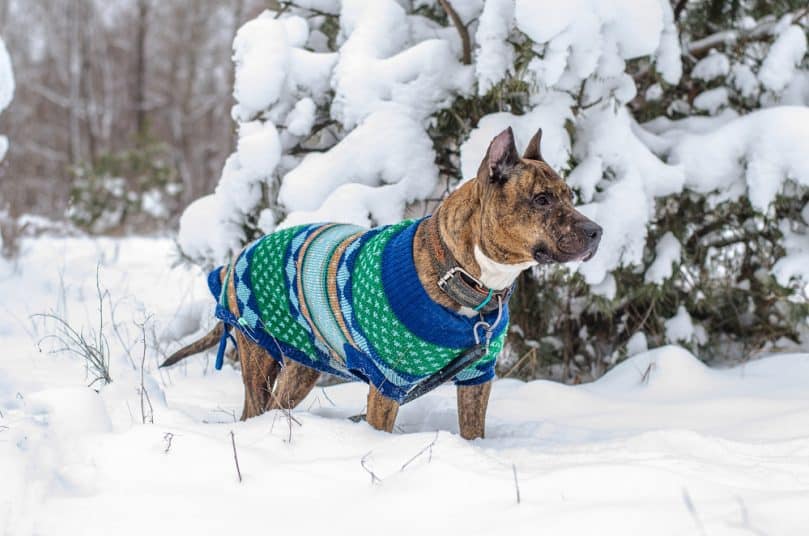 The temperament of a Brindle Pitbull is no different from its solid-pattern brothers and sisters.

They have an affectionate, lovable, and happy personality around their owners and inner circle.

They’re sweet on the inside but intimidating on the outside thanks to their muscles and broad chest.

Depending on their audience, Pitbulls have two opposite personalities: loyal and kind to their loved ones, but protective and, at times, aggressive around strangers.

Need an example? Watch how happy this Brindle Pitbull is around children when they come home from school.

Listen, at the end of the day, all dogs of all shapes and sizes have the power to bite.

The colorings of a Brindle Pitbull do not make it any less (or any more) aggressive than the rest of its family.

However, a news article from December 2017 specifically targeted two Brindle Pitbulls that attacked a woman to death in Virginia.

It’s a tragic story, but here’s the eye-opening twist: these dogs belonged to her. She raised them since they were puppies.

There’s no way to know for sure why these Brindle Pitbulls turned on their owner as there were no witnesses around.

Heartbreaking behavior like this explains why purebred and crossbred Pitbulls are banned in multiple municipalities across the country.

Where Does The Aggression Come From?

After hearing about the woman in Virginia, we have to wonder where this potential for sudden aggression comes from.

Going back to its origin story in the United Kington, the Pitbull was bred for bull-baiting… but it didn’t stop there.

It evolved into bear-baiting as well, along with dogfighting rings where people would place bets.

Pitbull owners would commonly take one with brindle fur and one with “regular” fur to see if there was any difference in fighting style or aggression levels.

Now we know there isn’t. 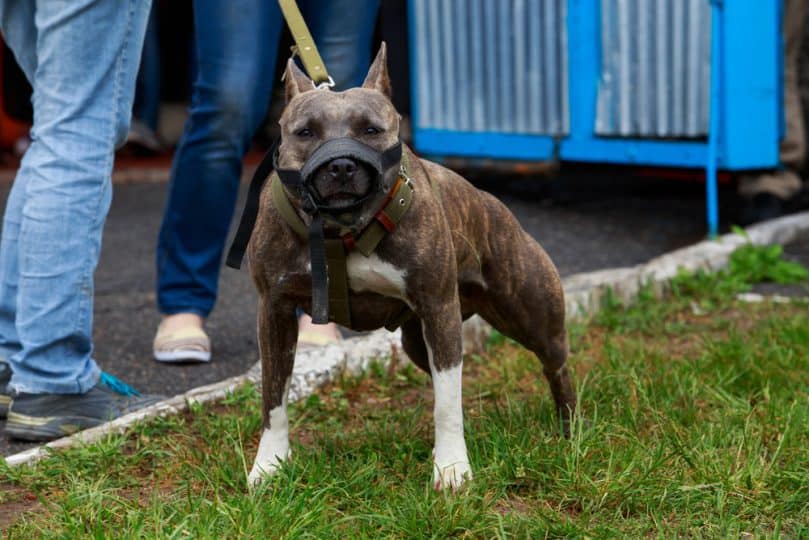 I’m Ready To Take One Home

OK, the decision has been made!

If you’re worried that a Brindle Pitbull will cost more because of its coat, then I have some good news for you.

I mentioned early than Brindle Pitbulls are not rare to find at adoption or rescue centers.

In fact, there are plenty of options at Adopt A Pet, the Pets section on Overstock, and Rocket Dog Rescue.

If you’re willing to spend a little extra on a Brindle Pitbull from a breeder, check out Crumps Bullies (based in Georgia), Manmade Kennels (based in Delaware), and McNamara Kennels in Maryland.

Is The Brindle Pitbull Right For You?

The coat of a Brindle Pitbull makes it a beautiful dog to look at… but that shouldn’t be your ultimate deciding factor.

Just because it’s pretty, doesn’t mean it’s the best choice for you.

The right owner for this dog is someone who understands and appreciates Pitbulls in general, regardless of color.

If you are familiar with the polarizing energy and connotations of a Pitbull and are looking for one with a brindle pattern, then this dog could be a perfect match.

The wrong owner for a Brindle Pitbull is someone who only cares about the coloring of its coat.

Remember, there are many other breeds out there who are more laid-back and easy-going that come in brindle markings.

Never pick a dog based only on what it looks like.

What’s your reaction to the Brindle Pitbull? Comment below!