Get to Know the White Boxer and What Makes It Special 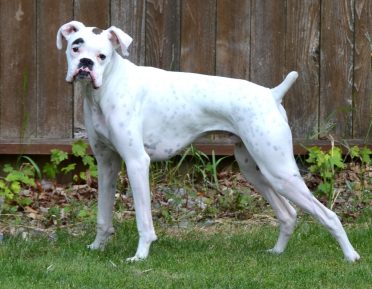 The White Boxer is a purebred Boxer and doesn’t qualify as a separate breed, but it stands out because of its white color. It’s a medium to large dog breed at about 21 to 25 inches tall, weighing between 50 to 80 pounds. The lifespan of the White Boxes is around 10 to 12 years.

White Boxers have an undeniable charm. Their neat white coats and cute puppy dog eyes are matched by a funny personality that will make any dog owner want to take one home.

In this article, we will get to know the White Boxer and answer questions about this adorable dog.

What is a White Boxer? 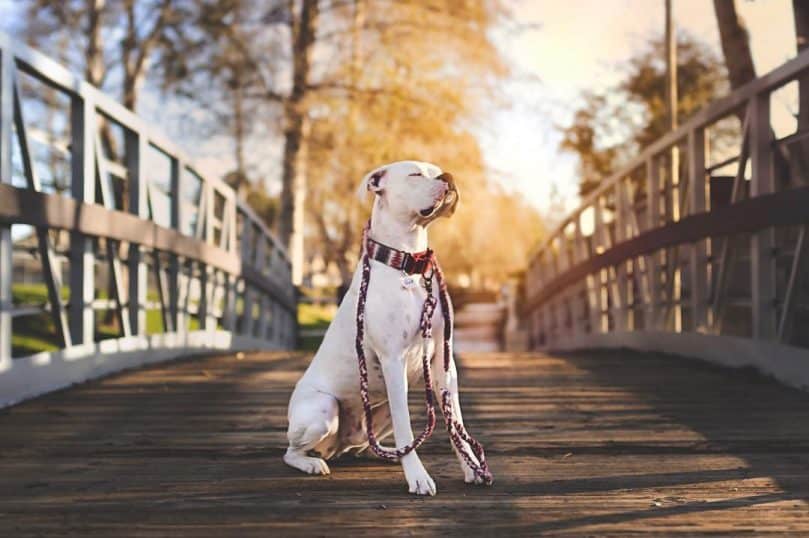 A White Boxer is not a separate breed from the Boxer and is not an albino either. As their name suggests, they are Boxer dogs that simply have white coats. However, their coat color makes them slightly different. We’ll discuss these details more later.

The Boxer breed we know today is from Germany and was originally bred for hunting and dog fights. However, these activities became unpopular as years passed, so Boxers found new roles as working dogs.

Many White Boxers are now bred to help humans do day-to-day activities. Some of these Boxers are cattle dogs or police dogs, while others are guide dogs for the blind.

All dogs have the tendency to be aggressive when they are not trained properly. Boxers got the bad reputation of being a vicious breed because they were originally bred for hunting and dog fights.

But, as times changed, these dogs evolved as well. White Boxers’ aggression lessened and they developed a friendlier, more people-oriented nature.

Boxers are now well loved and are the 10th most popular dog breed according to the American Kennel Club (AKC), proving that these dogs’ dark, aggressive past is behind them.

Here’s a video of a White Boxer talking to its human because he doesn’t want to leave the dog park:

A distinct physical feature of a Boxer is its head. Their jaws have an underbite and their muzzle is blunt. Their ears are erect and sometimes naturally fold over. Some White Boxers will also have cropped ears.

Most White Boxers have a muscular body with a broad, deep chest. Their tails are carried high and often docked.

This dog’s moderately-shedding coat is short and shiny, and it stays close to the skin. Boxers can only be considered White Boxers if they have white markings covering more than ⅓ of their coats. 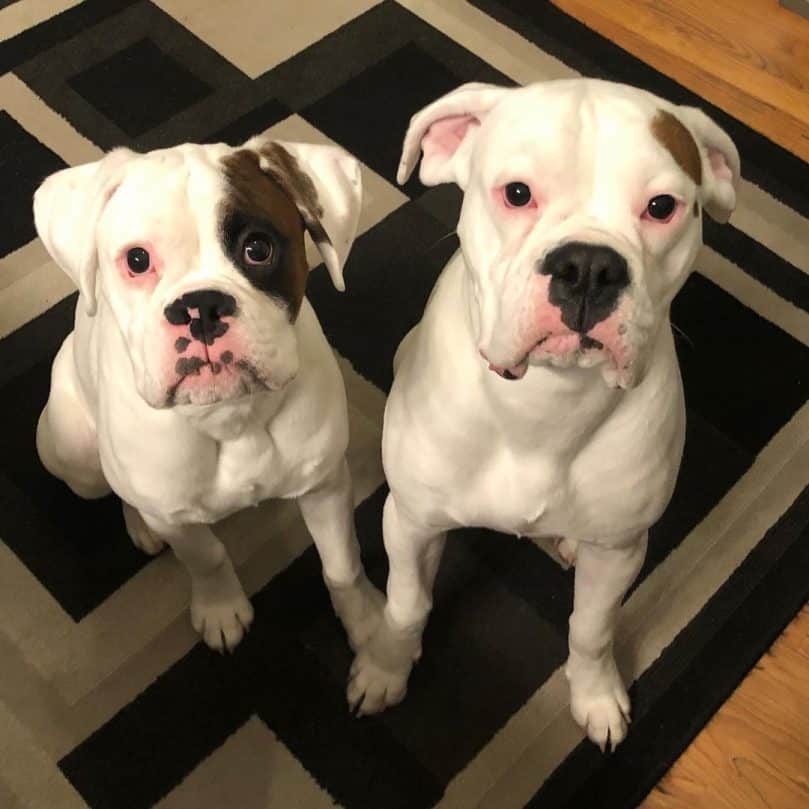 How rare are White Boxer puppies?

The quick answer is: not that rare.

Contrary to popular belief, having a White Boxer does not involve elaborate breeding techniques. Twenty to twenty-five percent of Boxers will be born white, so these dogs are not really a rare occurrence. For instance, two parents with white blazes have a 25% chance of having a White Boxer offspring.

As mentioned in the first paragraph the average lifespan of a White Boxer is 10 to 12 years. Aside from the common health issues a Boxer breed experiences, White Boxers are prone to having these conditions:

White Boxers are also said to be more prone to canine cancers than other breeds.

How do you care for your White Boxer?

Caring for a White Boxer is easy, especially since this is a low-shedding breed. However, you will have to devote some regular playtime for this active dog.

With the White Boxer’s coat, shedding is not a problem. Their short coats shed only a small amount of fur and require only a weekly brushing. However, they shed more than usual during springtime. Be prepared to brush your pet’s coat three times a week during this season.

The proper diet for White Boxers

Due to several health issues Boxers can suffer from, it is very important for them to have nutrient-dense food to keep them healthy and at their best. We’ve made a list of food that’s best for your White Boxers here. 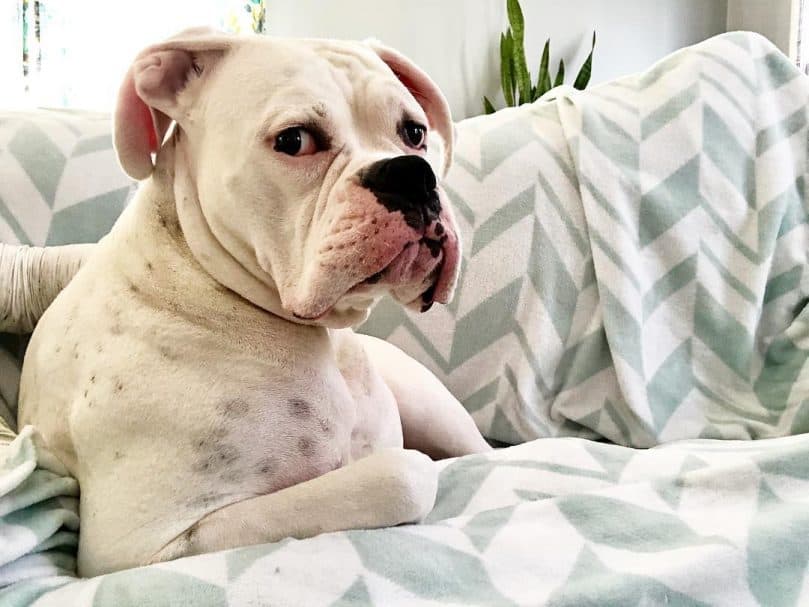 Like fawn or brindle Boxers, the White Boxer is highly energetic and athletic. This dog needs at least 30 to 45 minutes of active play and exercise in a day.

As we said before, this breed is prone to sunburn. Sun protection is a must when they are playing outside. if possible, limit their sun exposure to no more than 30 minutes when they’re out. You can buy them canine sunscreen for to protect their skin or have them wear a shirt when outside.

How do you train a White Boxer?

Boxers are working dogs and have proven to be versatile in the many jobs they’ve had in the past. White Boxers are highly intelligent and can be easily trained to do what needs to be done.

However, there are some Boxer behaviors that need to be addressed during training. Here are some tips on how to train a Boxer dog:

Due to the number of White Boxers that are deaf, owners have found other ways to train their beloved canine. Owners have adapted the use of hand signals, sign language, and flashlights for modifying their dogs’ behavior.

What makes the White Boxer controversial?

The White Boxer’s coat brings so much controversy, with the first being in their hometown Germany. White Boxers were originally part of the police force, but their coats made them easy to spot at night. This nighttime visibility rendered the pups useless in police operations.

Since they didn’t prove to be beneficial in the police force, White Boxers were no longer allowed to be registered in Germany by 1925. This ban aimed to take out the genes that make these Boxers white and led to breeders killing their White Boxer puppies and dogs.

But that was just the start as the debate about this breed still goes on today.

According to the AKC breed standard, a Boxer should have two-thirds of its coat is colored either fawn or brindle.

There are several White Boxer welfare groups that advocate for these dogs and condemn White Boxer euthanasia. Some of these groups have put up shelters and rescue centers for White Boxers. They are also active in promoting the White Boxer as a good dog, regardless of the health issues it may have.

Where can I find reputable White Boxer breeders? 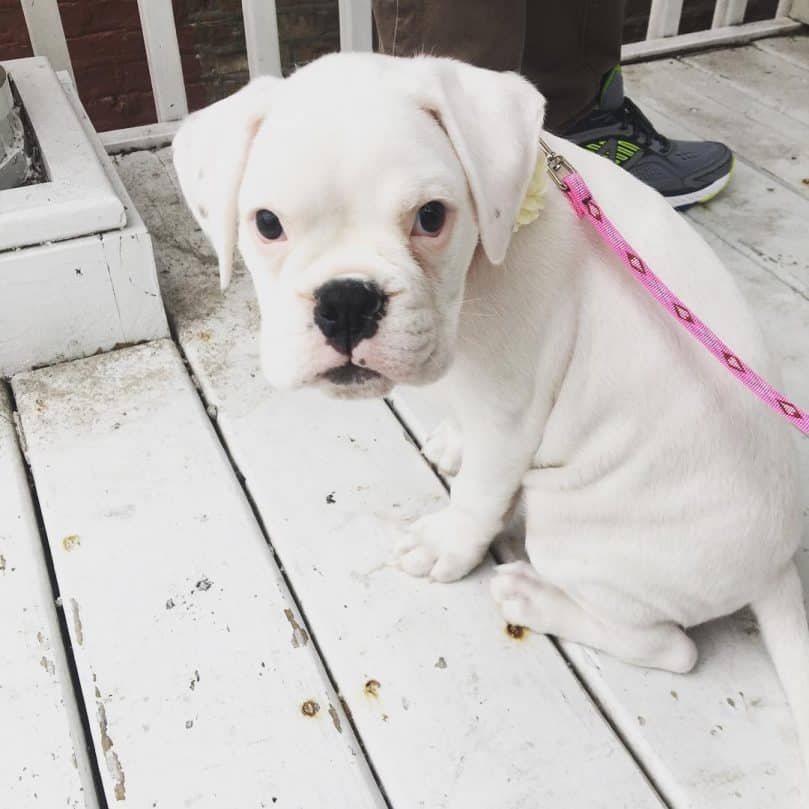 It all starts with choosing a responsible breeder. White Boxers have a number of health issues that they can suffer from, so you want to pick the healthiest White Boxer puppy among the pack. Each White Boxer puppy can cost around $600 to $2000.

It may be challenging to intentionally seek out breeders who focus on breeding White Boxers, so you can check out the following Boxer breeders:

You can also look for a White Boxer to adopt at your local rescue organization or animal shelter.

Final verdict: should you get yourself a White Boxer puppy?

These White Boxers are definitely cute, playful, and good family dogs. Due to their history as working dogs, they’re intelligent and obedient. Plus, their short coats require less grooming.

However, you have to consider the health issues White Boxers may potentially have. A pack leader attitude is also needed to properly train these pups.

Are you proud of your White Boxer? Write about them in our comments section!