The Canis Panther Is Four Great Dogs In One

The Canis Panther is a dog breed developed in the USA in the 1970s, also known as the Panther Dog. This designed dog breed is large at about 28 inches maximum height, weighing between 130 to 150 pounds. The lifespan of the Panther Dog is around 10 to 11 years.

Personally, I’ve never heard of the Canis Panther before, which automatically made me excited to write this guide.

They say the lion is the king of the jungle, but after reading this article, you’ll be convinced that the panther is the real deal.

Four Dogs Trapped In One Body

Perhaps the reason I’ve never heard of the Canis Panther is that it’s actually four breeds mixed into one body.

This regal dog is a combination of: 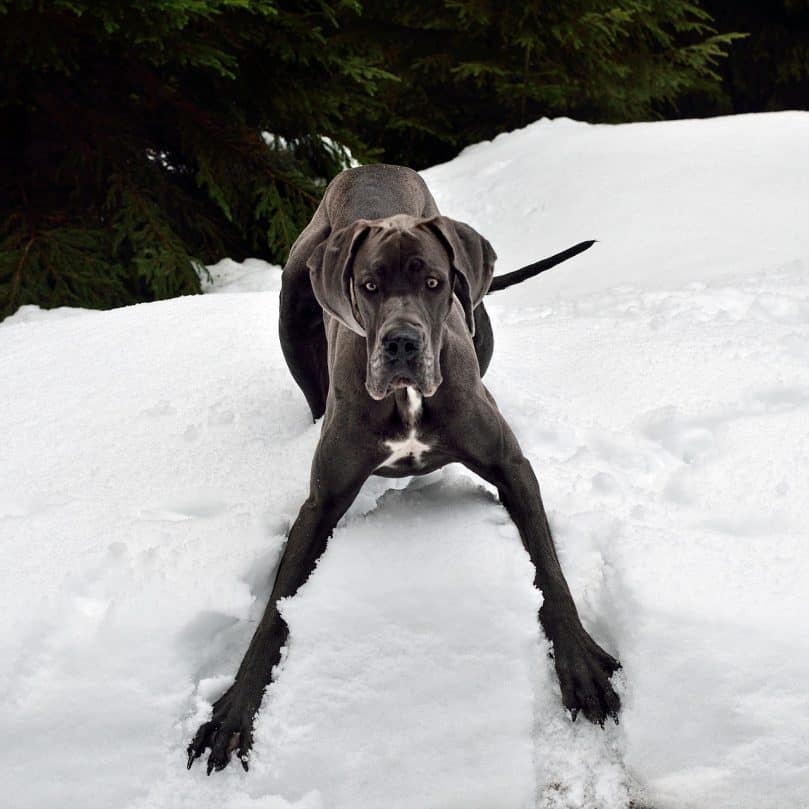 If you’ve ever Googled the Canis Panther, commonly referred to as the Panther Dog, you may have come across the name Scorpio Jones.

Scorpio was a famous dog trainer from the 1970s.

With the help of fellow trainers Michael Gypsy Stratten and L. Lopez, Scorpio “created” the Canis Panther by taking the genes of four top-protection dogs.

Their motive was to invent the ultimate guard dog, with natural protectiveness and loyalty to its pack and the leader.

Back in the 1970s, there weren’t as many protection breeds on the market, so Scorpio and his crew had to make their own.

This mix is so rare that it’s not officially recognized by any major kennel club. 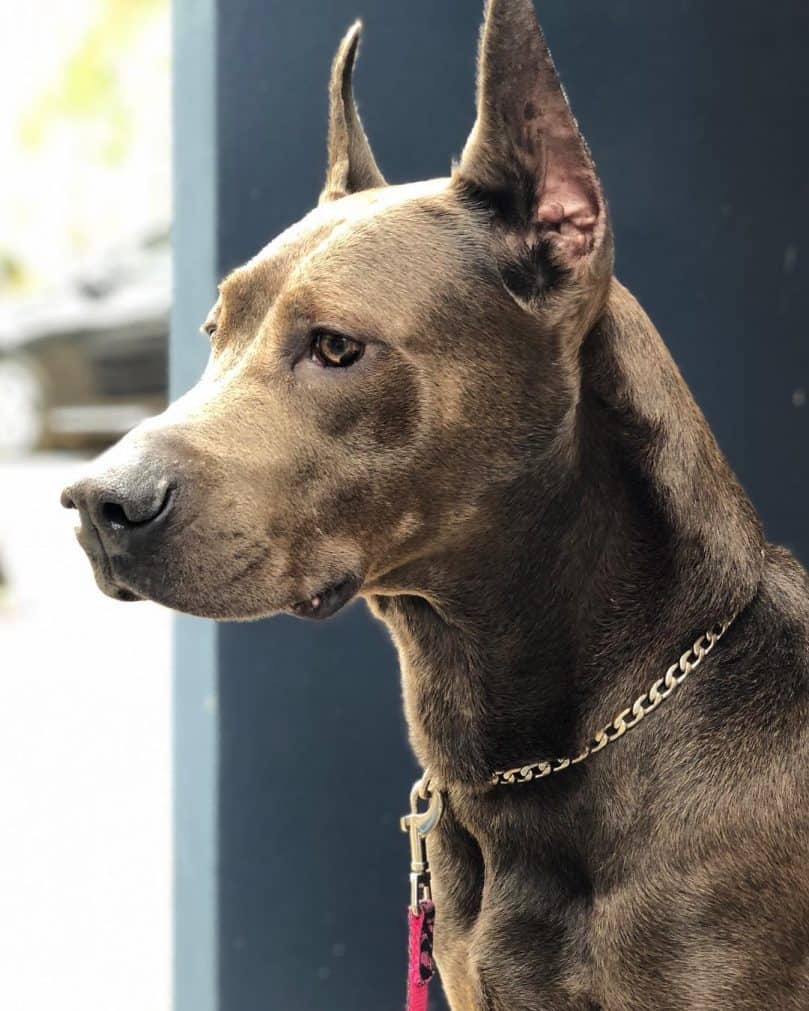 The Panther Dog: What’s In A Name?

You can easily see the resemblance between the Canis Panther and a wild predatory cat.

These dogs have an excellent nose, along with a wide jaw and chest. Most of their body is made out of pure muscle.

Many owners choose to crop the ears and tail, although it’s not necessary.s

When this dog was first created by Scorpio, it was considered a crossbreed. These days, however, it’s possible to find a purebred, according to research. But it’s not very common.

Black is the most popular coat color for a Canis Panther, but they also come in fawn, blue/grey, and chocolate. 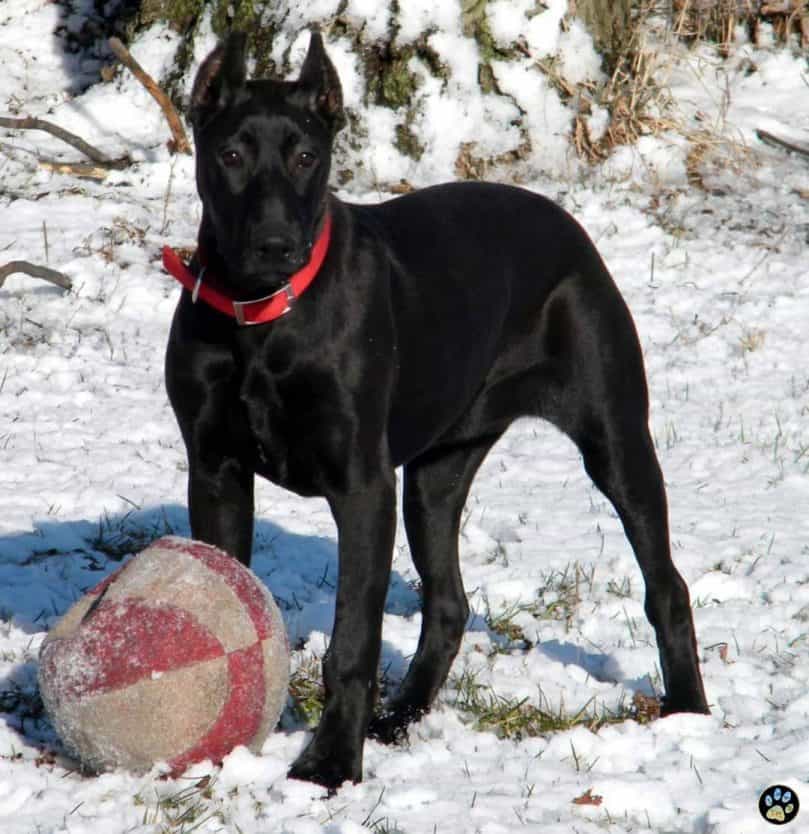 Don’t Let Strangers Get Too Close…

Just in case you missed all the hints, the Canis Panther ranks as one of the top guard dogs. It’s nicknamed the “Ultimate Protector.”

It was bred to serve and defend its alpha leader, which means you shouldn’t let strangers (adults or children) be around this dog unattended.

It’s not friendly with foreign animals, either.

Make no mistake, the Canis Panther will attack if its owner feels threatened. This dog will sacrifice its own life to make sure its family is safe.

So, yes, this dog can be aggressive at times.

Can’t We All Just Get Along?

But don’t let that information throw you off. The Canis Panther is capable of being a loving, loyal dog when trained properly.

This mix is smart, easy to train, and enjoys following the orders of its master.

Around its family, the Canis Panther becomes a different dog. It’s sweet, affectionate, and sensitive. Strangers will never see that side.

As for other pets, this mix dislikes dogs of the same sex but is capable of living with non-dominant breeds (perhaps meaning smaller dogs) if they’re raised together from a young age.

The territorial trait usually only comes in adulthood. Puppies are more social and like being around kids. 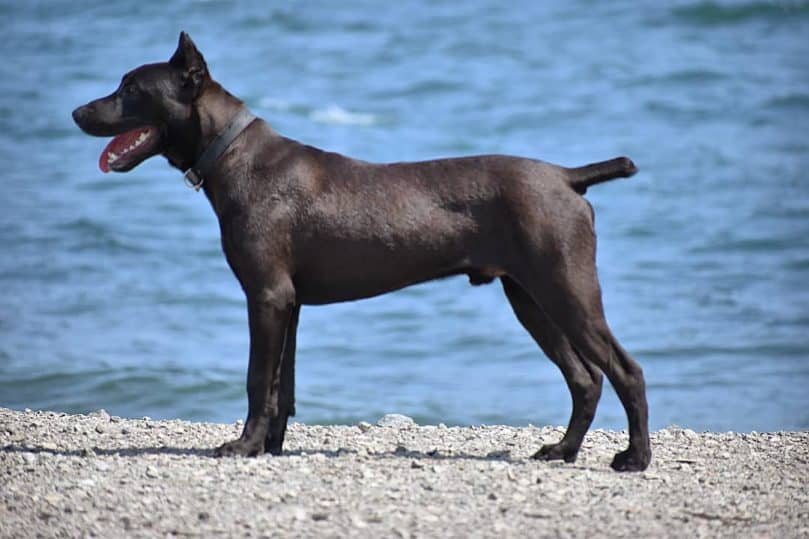 Looking After The Canis Panther

Let’s start with the easiest part — grooming. This dog is low-maintenance when it comes to brushing because its coat is so short and fine.

This type of coat requires this dog to stay indoors during the winter. It was not built for cold temperatures and climates.

The shedding level ranges from minimal to average, so the Canis Panther is not considered hypoallergenic.

When it comes to health, this beast is also easy to take care of, as it’s not known to have any dominant illnesses or medical conditions.

That being said, ALL dogs need their ears, teeth, and skin checked from time to time.

Training should also be a breeze since this dog is fast and learning and following orders. Early socialization is key to avoid an overly aggressive or anxious pup.

The Canis Panther does well with leash training and needs an authoritative figure to look after. Don’t be afraid to assert your dominance.

Despite its large size, this breed does not require a lot of exercise. A long walk is just fine for about 30 – 40 minutes.

Now, food is where this dog gets a little high-maintenance. The Canis Panther requires upscale, high-quality food to maintain optimum health.

As mentioned in the first paragraph their lifespan is around 10 – 11 years.

This woman lives with a Canis Panther, Cane Corso, and Doberman Pinscher. See what her life is like!

Many people acquaint the Canis Panther to a Pitbull in terms of aggression level and muscular build.

But the truth is, these breeds are actually very different.

Firstly, the Panther Dog is much bigger than a Pitbull, which tops at 19 inches (48 cm).

The Canis Panther is also more sensitive. It can pick up the negative vibes and emotions inside a home or if its owner is feeling sad.

It requires a peaceful living situation — no yelling or crying babies. 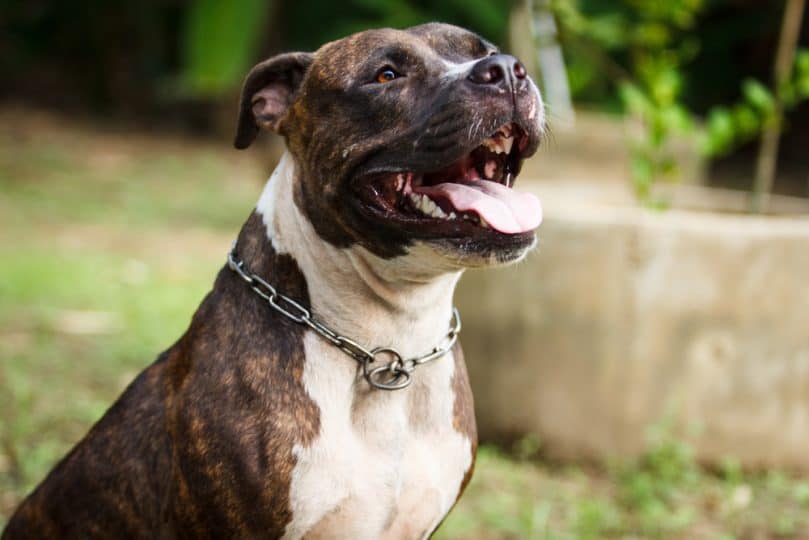 Ready to take home the Panther Dog? Well, you might have to wait awhile.

Because this breed is so rare, there’s really only one place to get it: The Rock Of Ages Kennel.

Don’t expect to find this dog at your local humane society or online at an adoption or rescue site.

These Canis Panther breeders update their site whenever a new litter is born. The average price is $1,000.

Final Thoughts On The Canis Panther

This dog has the personality of Doctor Jekyll and Mr. Hyde.

It’s sweet around its family but can quickly become aggressive around strangers.

The right owner for the Panther Dog will be a dominant leader with a peaceful home, and preferably no children or other pets.

The wrong owner for this breed is someone who’s shy, timid, and loves inviting friends and family over for dinner or parties.

Do you have what it takes to tame the Panther Dog? Comment below!