The Truth About The Teacup Chihuahua 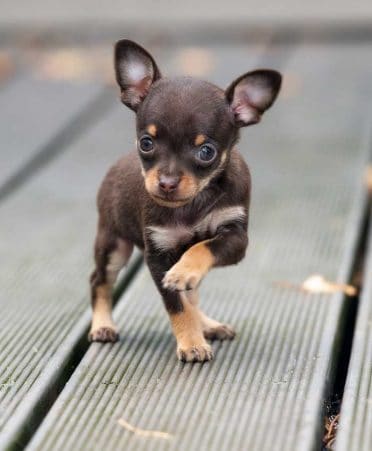 Teacup Chihuahua is a purebred Chihuahua that falls into the smallest category of this kind, also known as Teacups or micro Chihuahuas. They are the size of a teacup, as the name suggests. A fully grown Teacup Chihuahua can be around 6 inches tall, with an average weight of only 3 pounds.

You need to know what exactly a Teacup Chihuahua is and what’s good and not so good about her before getting such a dog and how do they differ from standard Chihuahuas.

In this article, I’m going to tell you the truth about these tiny tots, so read on to find out about the reality of owning a Teacup Chihuahua. 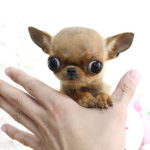 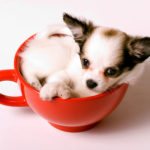 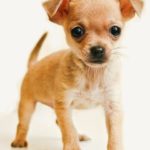 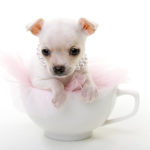 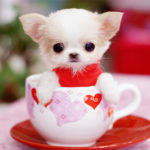 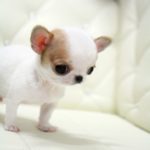 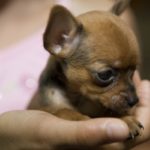 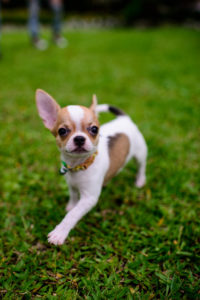 The Teacup Chihuahua (a.k.a micro Chihuahua, mini Chihuahua, and miniature Chihuahua) is, in fact, a mythical dog. She is not a breed, nor a version of the main breed.

The term ‘Teacup Chihuahua’ is just a description or, more precisely, a marketing trick to attract new customers and it refers to those adult Chihuahuas that have smaller dimensions than the standard ones.

Generally, the standards for a Chihuahua’s size are between 4 and 6 pounds (1.8-2.7 kg), but there’s no minimum,as mentioned above Chihuahuas as small as 2 or 3 pounds (0.9 – 1.3 kg) are accepted by the national and international clubs, too. And these miniature Chihuahuas seem to be extremely popular among dog owners.

This new trend has determined many unethical breeders to try to obtain smaller puppies through selective breeding, to sell their new dogs for higher prices.

When getting a miniature Chihuahua, make sure you’re not encouraging these practices as they are damaging for the breed in the long term. You should learn how to recognize a reputable breeder and only buy from someone who fits this profile.

No breeder can tell you how large your Chihuahua puppy will be as an adult. Genetics can be tricky when it comes to a Chihuahua’s size, so the puppy you see advertised as a “Teacup Chihuahua” could grow into a 5 or 6-pound dog.

Chihuahua puppies are small and cute, no matter how large their parents are. I think it’s impossible not to fall in love with them:

An easier solution to get a miniature Chihuahua is to get an adult instead of a puppy. When she is one year or over, she will be fully grown, and you can be sure about her dimensions. Check with the animal shelters, veterinarians and rescue groups in your area for a Teacup Chihuahua to adopt.

However, dealing with an adult Chihuahua is harder than starting with a puppy. Mostly because once they grow up, these dogs are stubborn and harder to train, so you’ll need more time to teach your future dog the house rules.

There’s more dog than toy in a Teacup Chihuahua

According to data compiled by Barkpost, Chihuahuas are the second most abandoned dog in the US, after the American Pit Bull Terrier. This is often due to people wanting them as an accessory and not realizing that these dogs have needs like any other breed.

If you’re thinking of getting a Chihuahua, you’ll have a living creature to take care of for the next 15 – 20 years.

What’s more, when you get a Teacup Chihuahua, you should expect a dog with special needs, due to her smaller dimensions. Here are a few things you need to know:

Keeping her away from cold

A Teacup Chihuahua is meant to be an only child

These dogs are small and have fragile bones, which makes them prone to injuries. Young children shouldn’t be allowed to play alone with a Chihuahua, because they’re not careful enough. Stepping or sitting on a Teacup Chi that’s hiding under the blanket can easily kill the dog.

Another reason to keep Chihuahuas away from small kids is their temperament. These dogs love to be the center of attention and can easily become jealous of young children and attack them. If you have kids in your house, it’s better to start socialization at the earliest possible opportunity, to get your dog used to people.

…and the only dog, unless it’s of the same kind 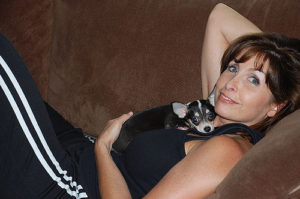 It’s also wise if these dogs don’t live with or spend too much time around animals that can cause them injuries or bone fractures. Chihuahuas tend to show aggression towards other animals and even attack larger breeds, which can end badly for a 3-pound dog. For this reason, it’s best if she is the only dog at home.

These dogs seem to prefer others of the same breed, so if you like having more than one dog, getting a second Chihuahua is better for your pet’s comfort and safety. If you already have pets, try to introduce them when she’s still a puppy and always watch your dog when she could get hurt by interacting with other animals.

Chihuahuas are usually what people call a “one-person dog” meaning they tend to bond with one owner more than with the rest of the family. They’re loyal, affectionate and playful, but I find them more suitable for single people that for large families. 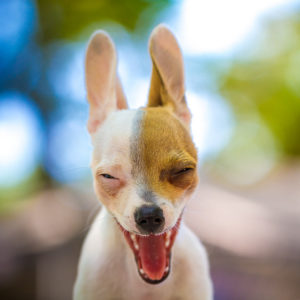 Teacup Chihuahuas have tiny bladders, which means they need to eliminate often. They also tend to have difficulties in controlling themselves, so potty training is a long process, which sometimes doesn’t bring any results.

The best approach when dealing with such small dogs is to designate a spot inside the home where your dog can eliminate. Paper training can help you keep your house clean without putting too much stress on your little friend.

Many Chihuahuas suffer from submissive urination, caused by their high energy levels and by excitement. Try not to excite too much her or give her praise while she is in this state of mind. For example, when you come home, wait for her to be calm before you greet her.

Usually, Chihuahuas are healthy dogs, but smaller Chihuahuas are more at risk of developing some of the breed’s common medical problems. So, consider the risks before choosing to get such a small and fragile dog.

A Teacup Chihuahua is prone to any of the following medical conditions:

Before buying a Chihuahua puppy, specialists recommend you ask for an ophthalmologist evaluation, a cardiac exam, and a patella evaluation.

Cuteness comes with a price: Teacup Chihuahuas are expensive dogs

With so many potential owners ready to pay a lot for a small dog, prices are higher for miniature Chihuahuas compared to regular Chihuahuas. And, as stated before, you can’t even know for sure how large your dog is going to grow when you buy a puppy.

While a Chihuahua costs on average between $300 – 500, a Teacup Chihuahua can be as much as $2,000. And this is just the beginning of a long and expensive journey. The first year will cost you at least $ 2,600, in medical exams, vaccinations, accessories and other small expenses.

Having pet medical insurance can help you reduce expenses. Generally, costs depend on your dog’s age, the type of coverage you choose and the area you live in, and they start from $50/month.

The Teacup Chihuahua is not a separate breed, nor even a breed. She is simply a miniature Chihuahua. She is a dog like any other, who needs a dedicated owner.

As we have seen, we’re talking about a dog with specific needs due to her special size. She does better with a single owner in a household without children and without other pets who aren’t Chihuahuas.

It’s important to look for a reputable breeder, and to bear in mind that, if buying her as a puppy, it is impossible to know what size she will be as an adult.

A Chihuahua, teacup sized or standard, is a long-term commitment and you should consider it seriously before starting this adventure.

What do you think about these teacup dogs? Do you have one or are you planning to get one in the future? Tell us what you know about these dogs in a comment below.

9 replies on “The Truth About The Teacup Chihuahua”