7 Interesting Facts About The Dachshund 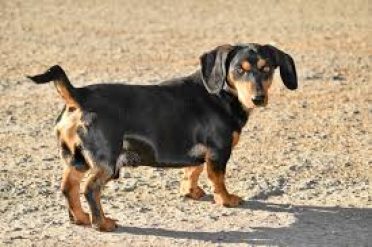 The Dachshund is a dog breed that originated from Germany, also known as the wiener dog or sausage dog. They are known for their developed scent ability, used to hunt small animals. Dachshunds are small-sized dogs, and their height is less than 9 inches, the weight is between 16 to 32 pounds.

Historically speaking the Dachshund is a scent hound used to hunt down foxes, badgers, rabbits, and other tunneling animals. Packs of Dachshund were bred to hunt down a wild boar. However, today they are a popular household pet due to their small size, attractive looks, intelligence, character, and most important of all, devotion to people.

Here are 8 interesting facts about the Dachshund breed:

1. Did you know Dachshunds have 3 different coat types? 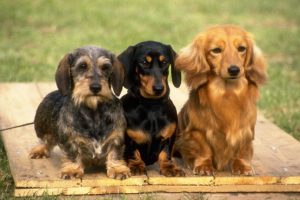 Genes for dogs control characteristics just like for humans, and it’s the genes that determine what type of coat a Dachshund has. The Dachshund Breed Council UK shares the 3 coat types: wire, smooth and long.

Most Dachshunds have short hair, whereas the long and wired hair types are a lot less common, because of the less dominant genes.

If you get a Dachshund puppy that has short hair don’t expect it to grow long hair as it gets older. I feel that all 3 hair types of Dachshunds look stunning, and the variety is perfect for dog owners. The short hair type version is easier from a maintenance standpoint, whereas long haired Dachshunds need their hair brushed a few times per week for around 15 minutes.

You may have noticed that Dachshund is a German word, and derived from two words. “Dachs,” which means badger and “hund,” which means hound. However, after the Second World War, the American Kennel Club decided to rename the breed to Badger Dog.

The point of this was to create a bit of distance from its German roots. Therefore, if in some English speaking countries you notice Dachshunds referred to as Badger dogs, now you know why.

3. Did you know that the Dachshund is the smallest hunting breed?

Out of all the hunting breeds the Dachshund is the smallest, but don’t let the small size fool you – they can be scrappy dogs at times.

In the 2008 Applied Animal Behaviour Science Journal information was published that highlighted its natural aggressiveness towards both other animals and people. However, don’t be alarmed, Dachshunds are very loyal towards their owners.

An advantage of its small size for hunting is that they can get into tunneling systems that animals have dug up. This combined with their agile nature means the Dachshund is the worst nightmare of animals trying to hide in the wild.

4. The first Olympic mascot ever!

During the 1972 Olympics in Munich, the first ever mascot was created called Waldi the Dog. This shows the national pride that Germans have towards the Dachshunds to give it this honor. But it didn’t stop there; the marathon route was designed to be in the shape of a Dachshund.

5. The Dachshund will keep you fit and upbeat

Dachshunds are naturally energetic and playful dogs, which is perfect if you have a yard and don’t mind playing with the dog often. Ideally, they should get a lot of exercise on a daily basis, 1-2 hours outdoors is ideal as a minimum.

However, they are adaptable creatures, which makes them a great pet to have. So if you have a busy working schedule on a specific day, your Dachshund should be able to cope with less outdoor time.

6. Did you know that Dachshunds took part in dog races?

The Dachshund is so agile and energetic that they even took part in dog races during the ’70s in Australia. They competed not only with other Dachshunds but also against other dog breeds. The race events were relocated to San Diego, California.

The Dachshund has short legs, so it didn’t win many races, but their fighting spirit is what gives them the ability to take part.

7. The 3 different base colors are just the tip of the iceberg

There are 3 different base colors which are red, black & tan, chocolate & tan. However, there is much more variety which makes the Dachshund one of the breeds that have the most variety regarding appearance when you combine that with the fact that they have 3 different coat types.

8. Did you know that the Dachshund comes in different weights?

The 3 different sizes are classified as standard, miniature, and kaninchen (a German name of rabbit). The first two sizes are universally recognized. The kaninchen is not recognized by US and UK based organizations. However, the “rabbit size” is recognized by the World Canine Federation, which is based in up to 83 countries. Here is a breakdown of the weights of the different sizes:

As you have learned from this overview of the Dachshund, this dog breed is rich with history as a hunting hound of badgers, foxes, and rabbits. They come in a variety of colors and 3 hair types (long, wired and short). Thus giving you a lot of freedom to select the Dachshund that you like the look of the most.

This dog breed is perfect for families, couples or if you’re living alone and are looking for a loyal friend. If you want a dog that’s energetic, has interesting character traits and loyal to the owner then, the Dachshund is a great option.