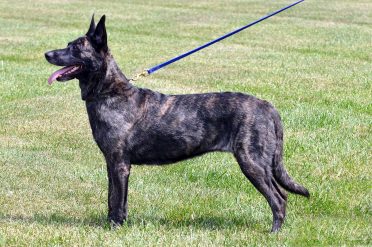 Let’s find out more about the Dutch Shepherd, including information about its origins, appearance, and temperament, plus where to buy or adopt one.

A bit of a background on the Dutch Shepherd 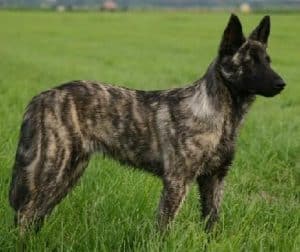 Dutch Shepherds (known as the Hollandse Herder in Dutch) originated in the rural parts of the Netherlands back in the 1800s.

They were used primarily to herd and protect sheep and other livestock as well as to stop them from eating crops and to alert farmers of strangers.

When sheep flocks dwindled at the end of the 19th century, the use of dogs for farming became unnecessary, and the Dutch Shepherd population plummeted.

It was during this time that fans set the first breed standard in 1898 and founded the official breed club, Nederlandse Herdershonden Club.

Thankfully, fans of the breed began to increase its numbers, and this dog is still around to tell the tale today, though the breed remains rare. 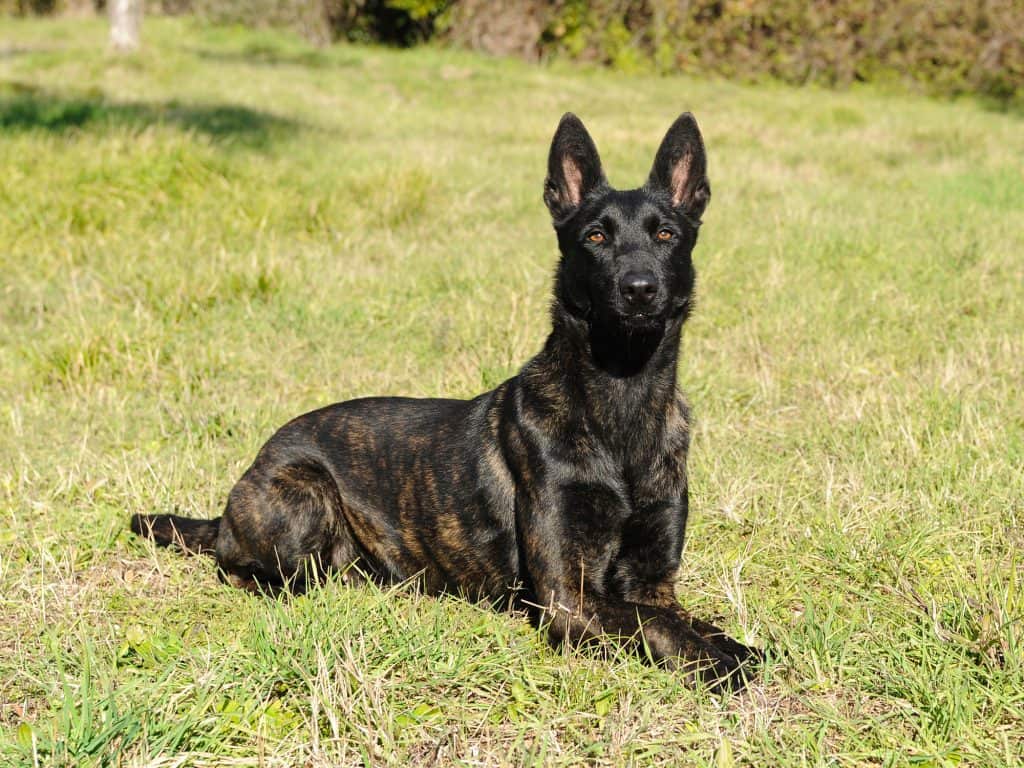 Their heads are wedge-shaped, and they have dark, almond-shaped eyes and erect ears.

These dogs have a double coat, consisting of a woolly undercoat and a top coat.

There are 3 outer coat lengths:

Short-haired: smooth and close-lying with a feathered tail 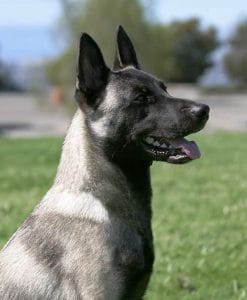 Long-haired: straight and close-lying; the back of the forelegs are feathered, and the tail is well-covered. 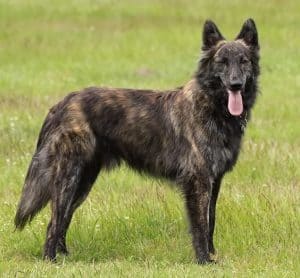 Wire-haired: rough, tousled hair that forms strong eyebrows on the head and a mustache and beard around the muzzle. The tail is well-feathered. 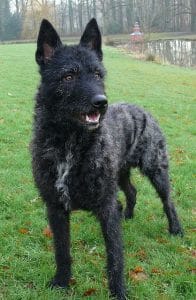 Dutch Shepherds always have a brindle coat, which means there is a striped effect. This pattern is usually less pronounced in wire-haired Shepherds.

As for color, they can be any shade of gold or silver brindle, sometimes with some white and black markings.

While it goes against the breed standard, blue Dutch Shepherds are becoming popular. And they’re really quite stunning. See for yourself… 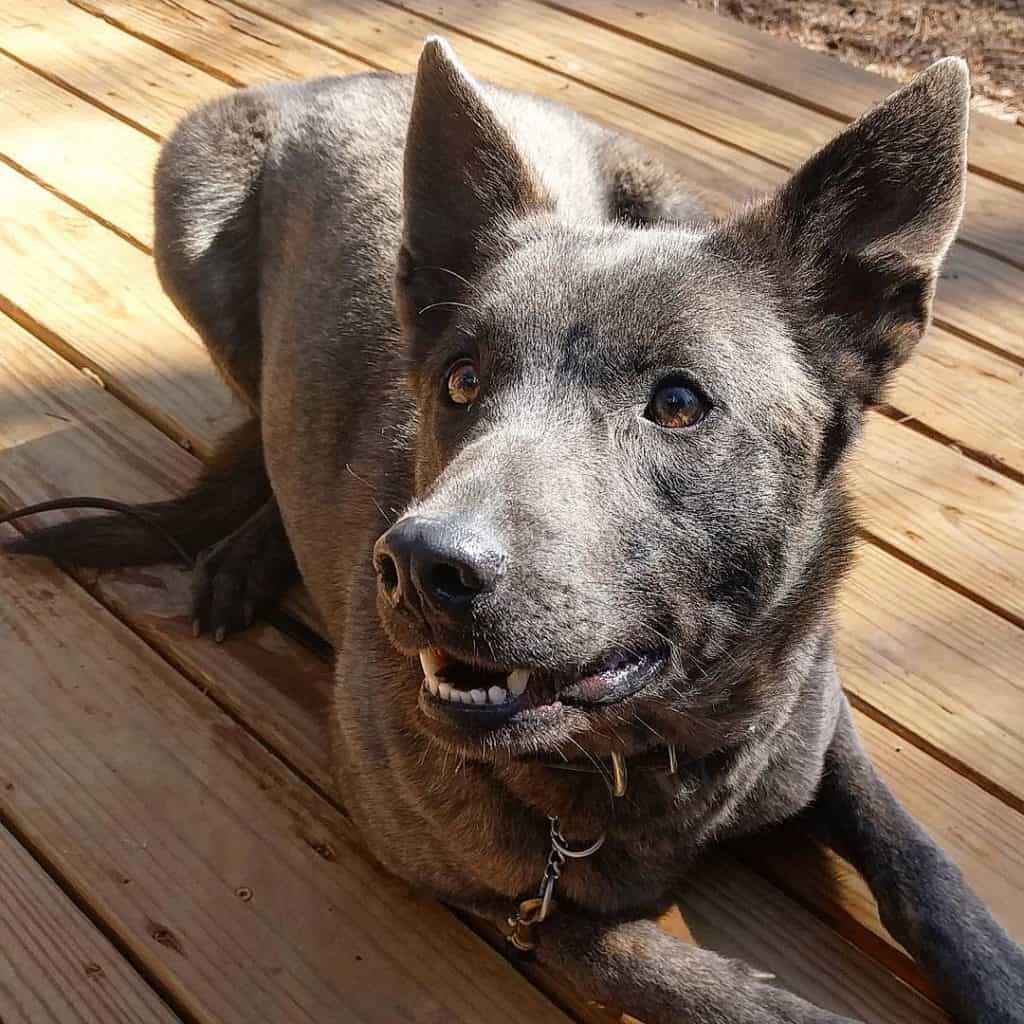 So now we know a bit about what these dogs look like, but what temperament do they tend to have?

Here are 4 things to know about Dutch Shepherds:

#1 They’ll have your back

First off, like German Shepherds, Dutch Shepherds are incredibly loyal and protective, so they make great dogs for a family. They are also good guard dogs and won’t hesitate to alert you of an intruder.

If you are considering getting a Dutch Shepherd, bear in mind that these dogs have a lot of energy. They tend to be calm when at home, but this is only providing they get at least an hour of vigorous exercise a day.

So, if you’re more of a couch potato, it’s probably best to look for another breed!

Last but not least, Dutch Shepherds are smart! To give you an idea of the level of intelligence we’re talking about, these dogs would herd sheep out to pasture and bring them back to the barn on their own!

So, they are highly trainable and are used as police dogs, guide dogs, and search and rescue dogs.

#4 They get on with one and all

Whether there are children or other animals in the house, these dogs get on with just about everyone.

So, you shouldn’t have to worry about your cat being chased down the road or her ignoring your toddler who just wants to play.

As long as she gets enough socialization and training, Dutch Shepherds tend to be friendly to other animals and gentle and playful with children.

Belgian Malinois and the Dutch Shepherds are both working dogs bred for the same purpose – to work as a shepherd dog. There are a lot of similarities between these dogs that can make telling them apart tricky.

So, here is a breakdown of what they have in common and what they differ on:

To see a more detailed visual comparison, check out this video:

Many people think these breeds one and the same due to very similar name. However, physically, Dutch Shepherds differ to German Shepherds by their smaller size, wedge-shaped heads, and brindle coats. German Shepherds also prone to more health problems than Dutchies, such as hip dysplasia.

As for their personality, they do share many traits with German Shepherds – they are loyal, alert, and obedient. However, fans of the Dutch Shepherd claim they have a stronger work drive and are able to work more independently than a German Shepherd, who is more reliant on her handler.

Another difference between these two breeds is the average price for a puppy. German Shepherd pups typically cost between $300 – $900, while Dutch Shepherds fall in the range of $1000 – $1200.

Dutch Shepherd mixes are becoming more and more popular. Below I have put together a list of the most common mixed breeds along with some info and photos of each. Check them out! 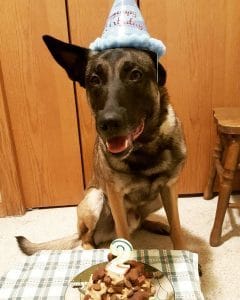 These breeds are often crossed. As we have seen, they have very similar temperaments, so there won’t be too many surprises here. Expect high energy, watchdog tendencies, and loyalty.

As for her physical appearance, there may be more variation in color and she’ll probably be slightly larger in size, taking after the Malinois side.

Who could resist this face? 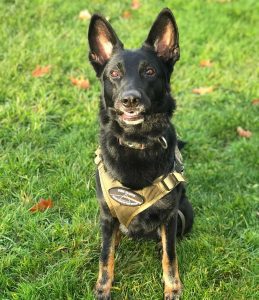 Given the double Shepherd here, you can expect a strong work instinct with this dog. She is active, needing at least 1 hour of vigorous exercise a day. This crossbreed is also very intelligent, so will need a mental workout, as well.

You could give her both at once by taking her to agility classes, where she will burn off energy and be challenged by working out obstacle courses.

To keep her occupied at home, you can also get her some interactive toys to play with.

This dog is loyal to the bone and incredibly protective of her family. She’s great with kids and makes a good watchdog. 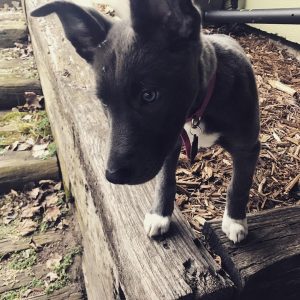 We know Border Collies to be rather hyper, right?

Well, cross her with another herding dog, and you’ve got a high energy dog with a strong work drive and impressive intelligence.

So, as with the above crossbreed, lots of exercises, play, and mental stimulation is essential.

This mixed breed is also great with children and just loves to spend time with her family. 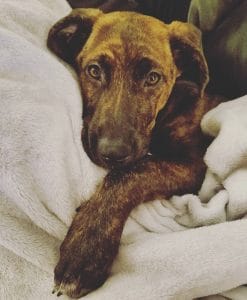 Everyone loves a Lab.

Mix in some Dutch Shepherd, and you’ve got a loving, loyal, and slightly more chilled dog than the above two mixed breeds. 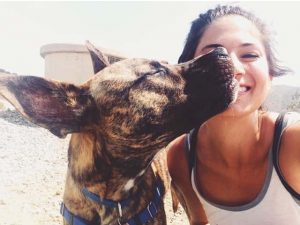 Dutch Shepherd Pitbull Mixes tend to be gentle and affectionate. They have playful, silly side that the Pitbull is famous for, so you should be up for some long play sessions!

This mix makes a great family pet who needs at least an hour of exercise a day – and lots of affection.

What Health Issues Do Dutch Shepherds Have?

Here’s some good news for anyone looking to get a Dutch Shepherd – they are a very healthy breed, indeed. They have a couple of health concerns, as every breed does, but nothing life-threatening.

The two health concerns for these dogs are:

It is important that, if you get a Dutch Shepherd through a breeder, they can show you evidence of health screenings for both parents for the above issues.

Note: Though not a health condition, it is worth mentioning here that Dutch Shepherds can be very sensitive to anesthesia.

In fact, in the Netherlands, they are usually given half of the usual dose, which is then added to if necessary. So, make sure you chat it over with your vet if your Dutchie should ever have to be put under.

Where Can I Buy a Dutch Shepherd Puppy? 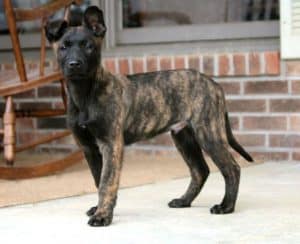 If you’re looking for some reputable Dutch Shepherd breeders, look no further. Here I have put together a little list of USA-based breeders, all of whom you can contact through the website.

Alternatively, there are lots of Dutch Shepherd rescues that need homes. Adoption fees will typically range from $50 – $500.

Below are few places to look if you want to adopt this beautiful breed:

Dutch Shepherds are still a rare breed, but purebred and mixed breed Dutchies are becoming more popular as pets.

They are great for families, showing loyalty and affection, and they get on well with other animals as well as children. They need lots of exercises, so if you’re thinking of getting this dog, you should be prepared to get active! They are super smart, too, which means they often excel as police and service dogs.

If you want to get a Dutch Shepherd through a breeder, check out the list above and take a look through their current or upcoming litters. Alternatively, there are plenty of purebred and crossbreed rescues waiting for a home.

Though these dogs are a healthy breed, you should still check they’ve got health screenings for hips and eyes before buying or adopting.

So, thanks for sticking with us, and we wish you the best of luck in finding your Dutchie dogmate!