Home » Breeds » Everything You Need to Know About the Patterdale Terrier

Everything You Need to Know About the Patterdale Terrier 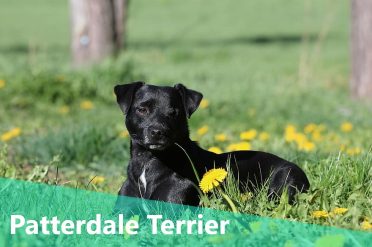 Patterdale Terrier is a dog breed originating from the English Northern Terriers back in the 18th century, also known as Black Fell Terrier. It’s a medium dog breed at about 10 to 15 inches tall, weighing between 11 to 13 pounds. Patterdales average lifespan is around 10 to 12 years.

In light of this, we’ve decided to devote an entire article to this gorgeous creature. Let’s dive in!

A Quick Introduction to the Patterdale Terrier 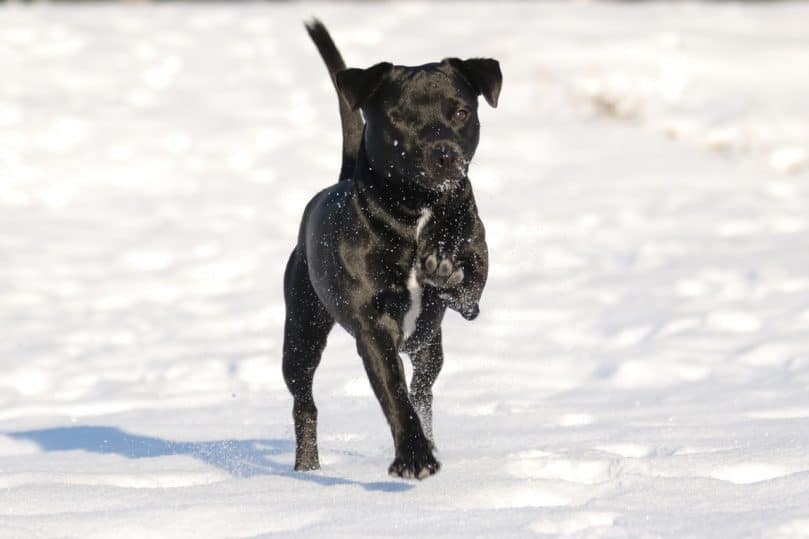 If you don’t recognize this dog breed, you may be more familiar with the term, Black Fell Terrier. These two titles are interchangeable, so don’t let that confuse you.

The Patterdale Terrier is an English dog breed, just like its cousins: The Airedale Terrier, The Lucas Terrier and, The Smooth Fox Terrier

Interestingly, the word terrier comes from the Latin word ‘Terr’ which means earth. The reference to land is a hat tilt to the breed’s ability to hunt vermin like foxes.

Where Did the Patterdale Terrier Originate From?

Patterdale terriers descend from 20th-century terrier breeds that originate from the North of England. In fact, this particular breed can be traced directly back to the Lake District.

The Ullswater Huntmaster, Joe Bowman, created them over 100 years ago. He saw the need for a terrier that could hunt red foxes in the mountainous countryside.

Traditional digging dogs weren’t able to do this task adequately, so Patterdale Terriers took over. Their keen sense of smell and small frame allowed them to excel at the job.

In addition to hunting foxes, Patterdale Terriers were successfully used to cull badgers throughout rural Britain. Eventually, the Patterdale came to the US, where they were used to kill groundhogs, raccoons, and foxes successfully.

Interestingly, there isn’t a set breeding standard for Patterdales. However, dedicated breeders are working hard to establish one.

Both the United Kennel Club and the American Dog Breeders Association have listed characteristics of the Patterdale Terrier, including:

If you’re worried about the weight of your pet, take them to the vets to ensure there aren’t any underlying causes. 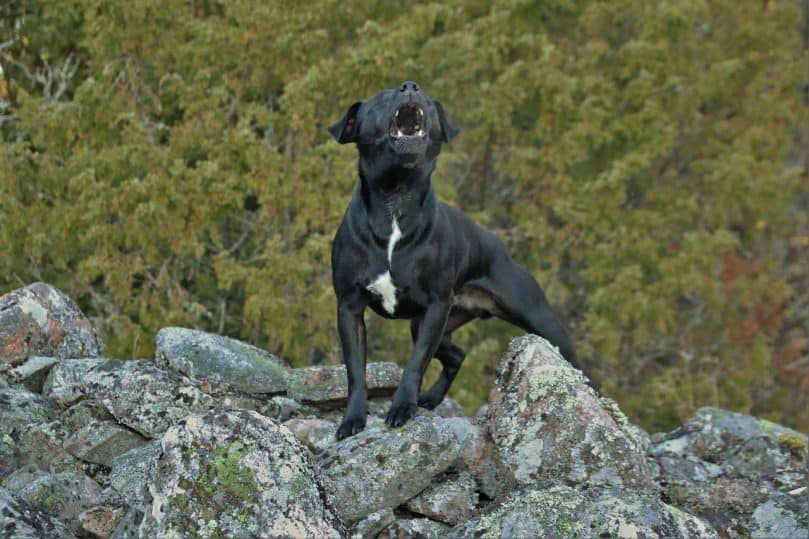 Patterdale terriers typically have a small head, dark eyes and a short muzzle. Their ears fold forward into a V-shape. This trademark feature is what makes their faces look so cute!

They typically boast a black coat. However, Patterdales are bred in the following colors (they’re just harder to come by):

The rarest of all is blue, with a dark gray nose. This specific color of this breed is particularly desirable.

You may find white patches on their chest and feet. However, this usually indicates cross-breeding with a Jack Russell.

Patterdale Terrier coats typically fall into one of the following three categories:

Despite these different fur types, their coat is always dense, glossy, and harsh to the touch. These characteristics make their coats weatherproof, which is one of the many reasons they’re so good at hunting. 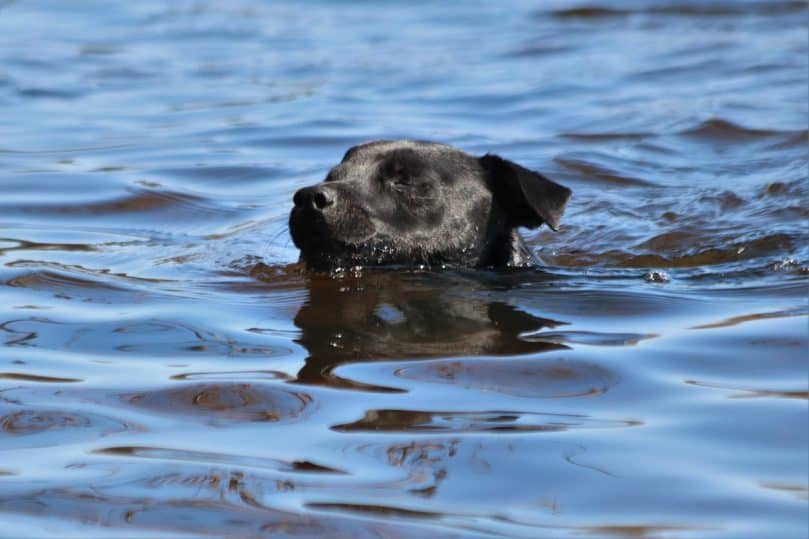 What are Patterdale Terriers Famous for Today?

Although some owners still use this breed for hunting. Nowadays, they’re more likely to participate in activities such as terrier racing and flyball.

They’ve also been known to do well in dog agility competitions because, despite their stubbornness, they’re incredibly intelligent dogs.

Things You Should Know About Patterdale Terrier Temperament

This breed is more of a working dog. They were bred to have plenty of energy and to hunt their prey tenaciously, which makes them excellent at fetching things. All in all, these dogs are the perfect pet if you enjoy spending time in the great outdoors.

Here are plenty of advantages to owning a Patterdale:

You’ll be pleased to hear that Patterdales aren’t anywhere near as ‘yappy’ as other breeds of terrier.

Patterdales are dependable, which makes them ideal if you’re looking for a devoted companion.

Patterdales can virtually find anything you throw for them, and they’ll always bring it back. As we’ve already said, they’re hunting dogs by nature, and you can sure put their smarts to the test in a game of catch.

Despite their many advantages, there are a few downsides to this breed. You need to know what you’re getting yourself into if you’re thinking about owning one.

#1 You Have to Socialize Them Early

Due to their independent and jealous nature, they can be a challenge to socialize with other dogs. So, be sure to train your pup early on; otherwise, you might experience significant problems later.

#2 They Can Be Too Much to Handle

They can be too energetic for households who don’t have enough time to dedicate to them. If they’re bored, they use their energy negatively.

You can kiss goodbye to your beautiful furniture and pristine wardrobe! Needless to say, they’re not the best breed for first-time dog owners.

#3 Their Hunting Instinct Can Be a Pain

Their hunting instincts often kick in when you take them for walks- especially if there are raccoons nearby. Sadly, raccoons have been known to attack terriers, and the results can be fatal.

#4 They Hate to Be Left Alone

Patterdales hate being on their own, and often suffer from separation anxiety. If you have a hectic job or a manic social life, they aren’t the breed for you.

How Easy Are Patterdale Terriers to Train?

Patterdale terrier training can be tough; they’ve been known to be fiercely stubborn which can make teaching them difficult.

However, they’re usually easier to train in comparison to their cousins, the Jack Russells and Yorkshires.

Patterdale terrier health problems are few and far between. However, their eyes can be an issue. The two main problems to look out for are Conjunctivitis and Cataracts.

Additionally, we suggest keeping an eye on their knees and taking them for an annual health check.

Conjunctivitis is also known as pink eye. For those of you who don’t know, this is an eye condition where the conjunctiva or, the tissue surrounding that area becomes infected. 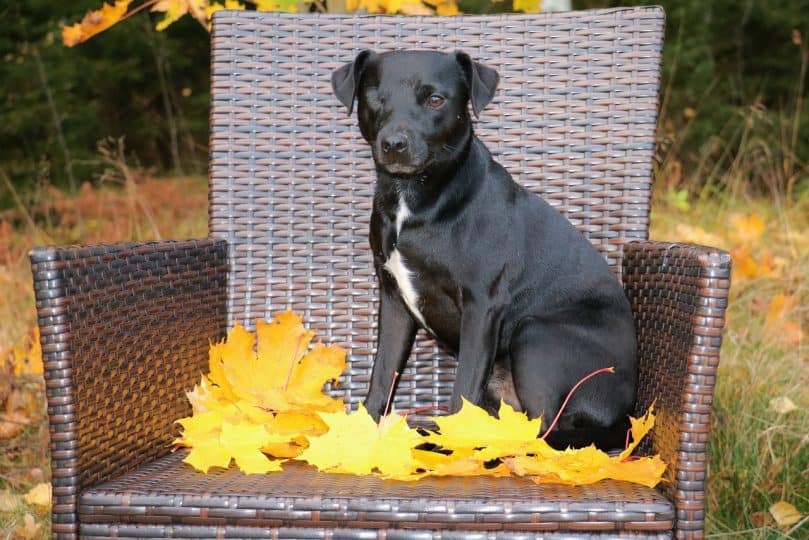 Similar to humans, Patterdales can develop cataracts. If your dog’s suffering from any of the following symptoms, be sure to take them to the vets because your dog may need treatment:

This disease occurs when the blood that’s supposed to go inside the liver moves around the organ instead. As such, the liver doesn’t get the nutrients or the oxygen it needs to function correctly.

If you think your dog’s suffering from this affliction, never fear. The vet can quickly diagnose your pet with a blood test. You can usually control the issue with medication and diet. It’s very rare that surgery is necessary.

We suggest having an annual liver panel as part of your dog’s yearly health check to ensure your Patterdale isn’t suffering in silence.

Knee problems are a standard issue among all breeds of terriers, including Patterdales. The posh term for this problem is patellar luxation. In layman’s terms, this refers to the kneecap moving out of place.

Now although this sounds pretty grim, in reality, it isn’t as bad as it seems. If you’ve noticed your terrier kicking its leg to the side of its body, there’s a good chance it’s suffering from its knee.

Typically, the patella will correctly reposition itself without the need for surgery. However, if this issue occurs regularly, you’ll need to monitor it, and if their ability to walk is affected be sure to take them to the vets.

The first thing you need to know is that they’re a rare breed in comparison to other terriers. There aren’t as many breeders in the U.S as there are in Europe. Here are a couple of US breeders: Lost Lake Farm and Bo’Dark Kennel to help kickstart your search.

You’ll have to be prepared to travel and to spend $500-$700 dollars if you want a Patterdale Terrier puppy.

Rescue dogs tend to be older, so if you want to a pup, you’ll be more likely to get a mixed breed.

Our last bit of advice is NEVER buy a puppy from a pet store. Always use a trusted breeder that shows concern for the mother. You should always prioritize quality over cost; it just makes ethical sense.

Top Tip: Always try to meet the parents of the puppy to check their temperament and see whether they have a good relationship with their owner. 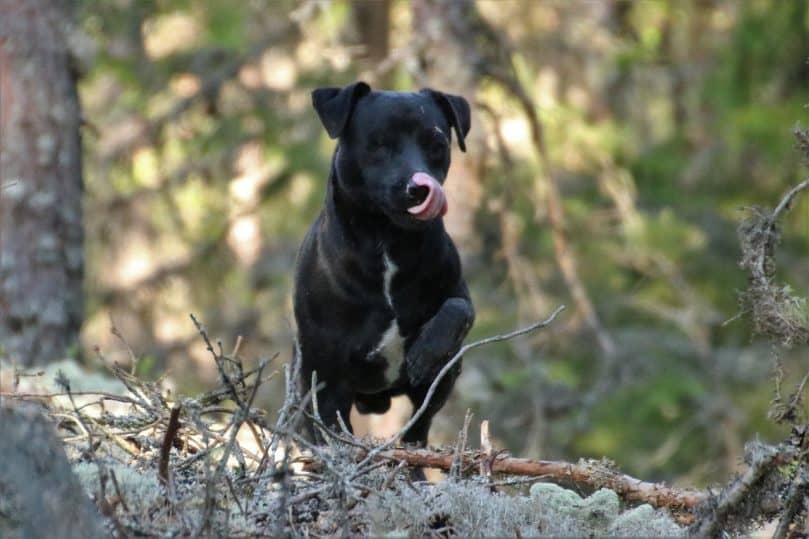 However, as we’ve already said, they have bundles of energy and can be too much to handle if you have young children or don’t have the time to invest in them.

If that sounds like you, you might be better off with a terrier mixed with a calmer breed of dog, like a Cavalier King Charles spaniel or his mixes.

You need the time to take them on long walks every day and live somewhere where they can run around.

Apartments and houses without gardens aren’t appropriate homes for this dog; they need enough space to roam.

If you’re an experienced dog handler, an active single, or an outdoorsy type, you’ll make an ideal Patterdale Terrier owner.

6 Interesting Facts About the Patterdale Terrier

To finish up, we thought we’d highlight some facts about this fabulous breed of dog:

Although Patterdale Terriers are harder to come by, they’re certainly out there; you need to do your research and commit to finding one from a reputable breeder.

If your idea of heaven is hiking through the woods, and spending the majority of your time outdoors, then a Patterdale is the dog for you. They need a ton of exercise, so be prepared to put your walking shoes on, and get active!

Thanks for sticking with us, we hope you enjoyed this guide. Let us know in the comments if you’re considering getting a Patterdale or already own one; we’d love to hear from you!