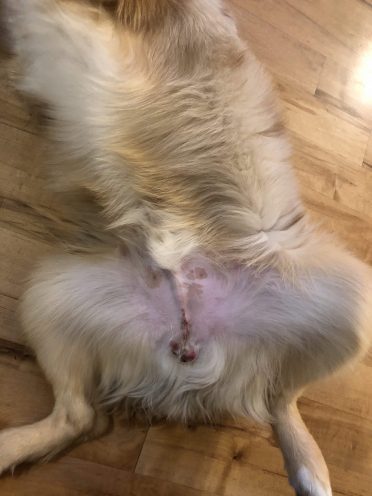 Dog Neutering is a surgical procedure that concludes into the removal of both testicles and results in the sterilization of the male dog. This procedure is also called castration, and it will stop the dog’s ability to reproduce. Neutering your dog has some health advantages in terms of reducing genital possible illnesses like prostatic hyperplasia.

Keep on reading and get all the facts and information about these procedures.

The Difference: What are neutering and spaying? 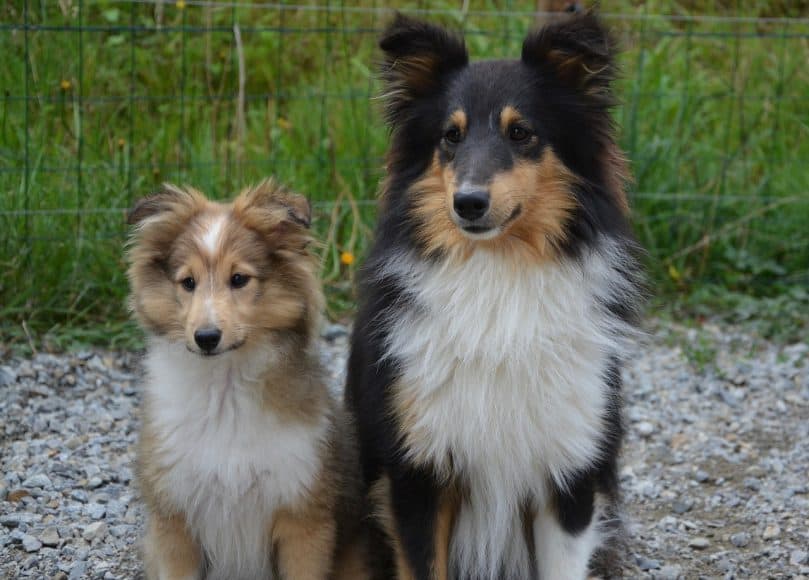 A female and male Shetland

Neutering, also called castration, is a procedure explicitly done on male dogs. It’s a common term to describe the surgery where both testicles are extracted to sterilize or stop a male from reproducing.

There are alternative but not commonly performed procedures such as vasectomies. Vasectomy is where the tubes that carry sperm from the testes are severed.

Spaying is a term used on female dogs where their reproductive organs are removed. It would eliminate their cycle and cease the ability to get pregnant. This is also called ovariohysterectomy if both the uterus and ovaries will be removed, or ovariectomy if it’s just the ovaries.

Why should you neuter or spay your dog?

Most people know that shelters are filled with unwanted pets, from litters to adults. So getting your dog spayed or neutered will help control unplanned pups and strays.

You’d literally be saving lives by preventing pets who don’t get adopted or rehomed from getting euthanized. Not only that, neutering or spaying your dog can cut down the chances of him or her getting particular health concerns. It can also help with some behavioral problems.

Advantages of spaying or neutering dogs

These procedures are known to benefit the health of canines.

If you have a female dog (bitch), spaying can prevent her from getting potentially life-threatening issues such as pyometra or mammary cancer.

For owners who have male dogs, neutering or castration reduces the risk of prostatitis and enlarged prostate due to old age. It will also eliminate the risk of him getting testicular cancer, which is common for unneutered or intact dogs.

Potential disadvantages of neutering or spaying your dog

There are specific health issues, such as orthopedic conditions and prostatic cancer, that are a bit common in canines who have been neutered or spayed.

Other potential health problems for neutering include reduced metabolism. But it doesn’t mean the surgery itself would cause your dog to be overweight. Obesity, in both intact and neutered dogs, is often due to lack of exercise and over/free feeding.

For large breed puppies, neutering before the bones are fully developed has been linked to increased risk of knee injuries (cruciate ligament tear).

Even if you remove the reproductive organs of your pet, it won’t cause personality change, intelligence, instincts, affection, guarding, as well as playfulness.

And despite all those cons, the pros of neutering and spaying dogs are greater as it’s the best option for the longevity and overall health of your pet.

When is the best age to spay or neuter your dog 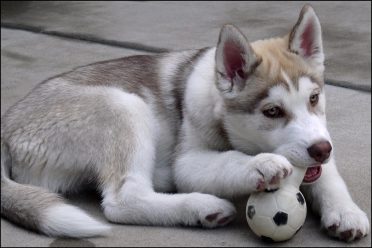 Before deciding on anything, talk with your trusted veterinarian since there are factors that will greatly influence the timing of neutering or spaying.

Although the traditional age to spay or castrate dogs is around 6 months, some shelters or clinics can do it safely do it to a pup as young as eight weeks to two months old.

For spaying, the vet usually recommends doing it before a female dog’s first heat cycle, which is around the age of 5 to 10 months.

Veterinarians have to give your pet a full checkup to make sure he or she has no existing health issues. Be prepared to provide all the information about your pet’s medical history and if your furry buddy is taking any medications.

The canine’s breed can also make a difference, as small or standard-sized breeds mature faster than large or giant ones.

Aside from that, small and medium males are neutered earlier compared to larger breeds. The vet may advise you to wait until your giant pup is at least a year old or older before getting the surgery done. 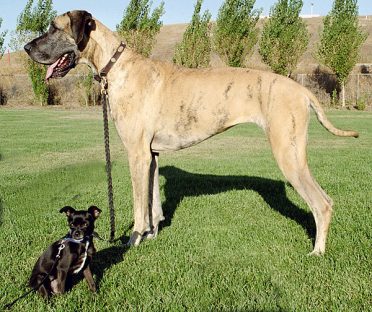 A small breed (Chihuahua) and a giant breed (Great Dane)

You have to consider the living situation of the dog as well. If you only have one dog at home, then the urgency to neuter or spay him or her is much less.

But if you have a lot of canines at home, like adopting a male and female from the same litter, then you should get them neutered and spayed earlier. Especially before the female goes into heat.

Adult dogs can be neutered, too. But there’s a slightly higher risk of getting postoperative complications in dogs that are older and have more health problems or overweight.

One of the popular beliefs related to castrating or spaying is that sterile dogs will get fat, which isn’t true. Canines would need fewer calories (about 20 percent) after the surgery. So adjusting their diet and staying active will avoid excessive weight gain.

Another misbelief is that removing a dog’s reproductive organs would change their personality. It is also not true, and the surgery wouldn’t change their behavior much at all.

Although it’s not seen in all dogs who are neutered, the procedure may decrease or remove undesirable behaviors. But it won’t be a significant impact.

So if your furry guy is often roaming, humping, and show a particular type of being aggressive, you may notice that he’s more behaved after the surgery. Just know that he might get an insecure or shy behavior if he’s neutered before puberty.

Is a neuter or spay surgery risky or dangerous?

There will always be some risk involved whenever a dog undergoes surgeries that require general anesthesia.

The common issues would include bleeding, liver and kidney problems, heart murmurs, postoperative swelling, or infection. Though neutering or spaying are considered major operations, the chances of getting any complications are meager as per ASPCA.

Experts would usually say that “your pet has a greater chance of getting injured in a car wreck, than getting complications due to surgery or anesthesia.”

Is neutering or spaying done for other reasons?

Aside from the distinct advantages of these procedures, they’re also performed to control hormonal (testosterone) dependent illnesses like perianal adenomas.

Some castrate or spay their dog to try and treat forms of aggression.

In older or adult dogs, the operation can be done as a treatment for testicular tumors and some prostate gland conditions.

The process: What happens to my dog if he or she get spayed or neutered?

After a complete examination, your dog will be injected with anesthesia. It’s mostly done through an intravenous catheter, while also providing fluid therapy while the surgery is ongoing. Then a breathing tube is inserted in his or her windpipe (trachea) for oxygen and gas anesthetic. Once your dog is all set up, the vet will make a small cut in the front part of the scrotum to remove the organs.

It’s a fast and straightforward surgical procedure that can be done in about 15 to 20 minutes.

Most of the time, vets would use sutures that are absorbable so that there would be no need to bring back your pet to the clinic or hospital.

The cost of spaying or neutering a dog

The price range for the surgery would depend on the size of your dog and location. There are low-cost clinics that can charge between $45 to $135. ‘But generally, it’s an average of $300.

Come to think of it, the cost of the neuter or spay surgery is way cheaper than having and raising puppies.

Some organizations can help dog owners look for affordable resources in their area.

SpayUSA even offers vouchers to cover part of the surgery bills in their participating clinics. But you can check the local municipalities in your place, too. And there’s also ASPCA or American Society for the Prevention of Cruelty to Animals.

Keep in mind that low-cost doesn’t mean low-quality. They’re there to help pet parents who are looking for affordable options to have the surgery done. You can ask for a bill that has a breakdown of what they’re charging you.

Aftercare: Helping your dog recover from the spay or neuter surgery

It’s a general rule that you don’t give your dog any food the night before the day of the operation. But it’s essential you provide him or her adequate nutrition, so some vets may advise you not to withhold food at all.

After that, you can stay within the clinic or hospital while you wait for an update, or you can come back and pick him up after a few hours. He or she would be ready to go home in about 6 to 7 hours after the surgery and the recovery period would take 10-14 days.

Before bringing your dog home, discuss pain medications with the vet. You would want to be prepared just in case your pet needs it.

What else can you do to help your dog recover?

Postoperative precautions to take after your neutering or spaying

Provide your pooch with a quiet and clean space (like a crate) to recover. Keep him or her indoors and away from your other pets.

No running or jumping for up to two weeks after the surgery or as long as the vet recommends it, you wouldn’t want those stitches to open up! 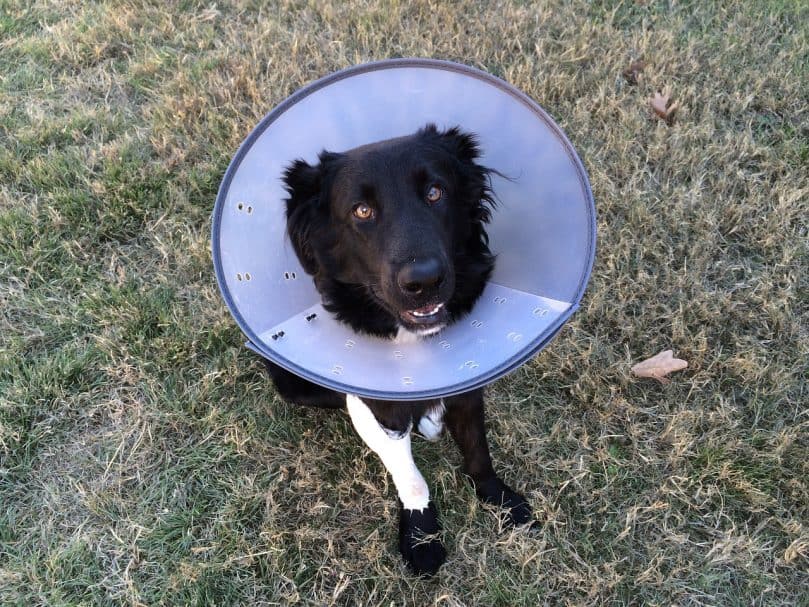 And speaking of the incision, don’t let your pet lick it to avoid infection. You can make him, or her wear an Elizabethan collar or cone to keep your furry pal’s attention away from it.

And check those stitches every day. You would want to confirm that it’s healing properly. If not – redness, swelling, discharge, odor, or the incision is opening up – contact your vet right away as well as for any other concerns like, if your dog seems lethargic, losing appetite, having diarrhea or vomiting.

Don’t let your dog get wet and don’t give him or her a bath for at least ten days post surgery.

Until then, leash walks and lots of rest will help your canine get back to his or her usual self right on time.

To gauge your pet’s recovery, you would notice if he or she seems comfortable to move around. As well as if your dog is getting energetic enough to have even a little bit of fun, then it means he or she is doing okay.

If you have any stories to share about neutering (castrating) or spaying your pets, or if you have any questions, let us know by typing it all in the comment box below!