Get To Know The American Bandogge (AKA Bandog): A Regal Beast

To be completely honest, I had no idea what the American Bandogge looked like.

After I realized what this breed looks like, I feared many people would make negative assumptions about it based on its muscular build and large body.

But we should never judge a book by its cover. Is there a soft side underneath that build of steel?

We’re about to find out! Keep reading to hear about the pros and cons of the American Bandogge. 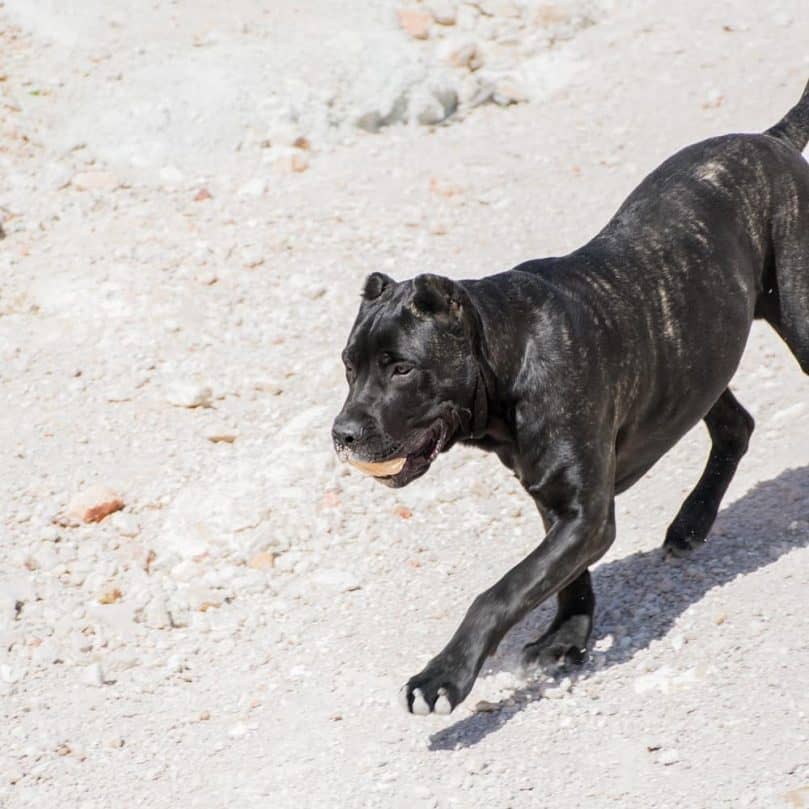 What’s In A Name?

First things first, what the heck is a Bandogge/Bandog?

It’s a general term for non-purebred dogs of the working Molosser strain. The Bandogg term is believed to have originated in the Middle Ages in England.

But wait, what the heck is a Molosser dog?

Molosser is a category of large dogs that have powerful, muscular bodies and all descended from the same common ancestor — the Molossus shepherd dog from Ancient Egypt.

The following breeds belong to the Molosser family:

The word Bandogge/Bandog is used to describe an umbrella of mixed breeds that come from the list above.

Therefore, the American Bandogge is not always a blend of the same two dogs.

Eventually, there became so many Pitbull, Mastiff, and Bulldog cross-breeds that man decided to group them all into one category because of their similarities: the Bandogge.

The majority of information in this article counts for most Bandogge breeds. 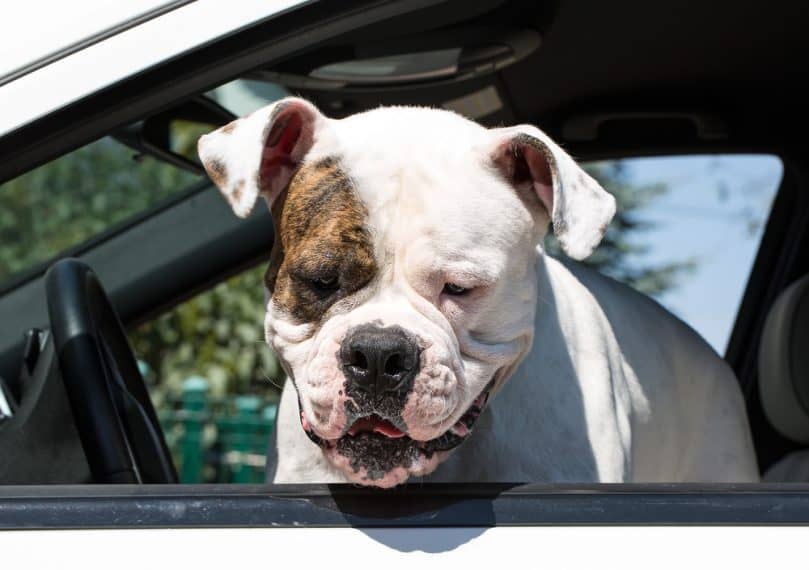 Its temperament is described as friendly, energetic, and gentle, with a dominant side that requires a confident owner.

Its coat colors can be found in shades of white, brindle, fawn and brown.

It has a clownish, affectionate, and friendly personality that, unfortunately, often times gets overshadowed by its aggressive reputation.

You can find its coat colors in hues of white, brindle, brown, and blue.

The lifespan of an American Pitbull Terrier is 8 – 15 years.

Based on looks alone, these parent breeds are often confused for one another.

Just remember that the American Bulldog is larger with a stalkier and chunky body. The American Pitbull is smaller and slimmer.

Additionally, these breeds both belong to the Bully family and come from a history of bull-baiting.

Because of their dogfighting ancestry, both breeds are said to have an aggressive and territorial side. 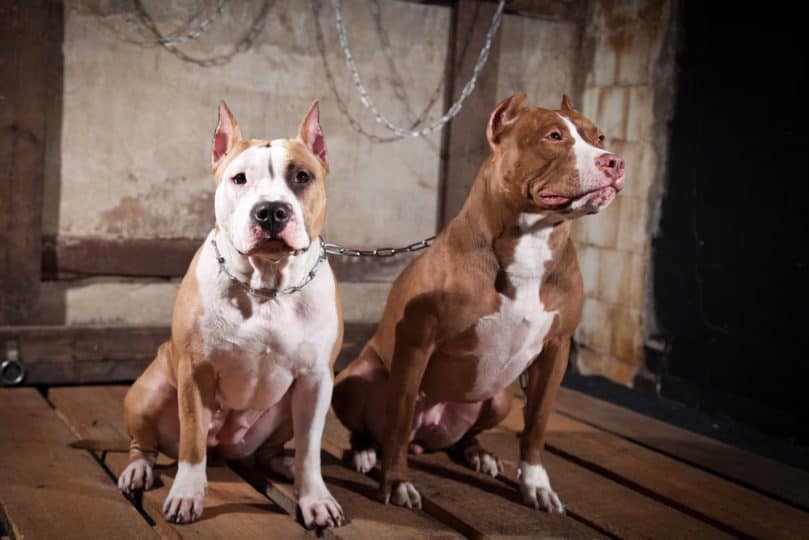 The Mastiffs are a giant-sized breed that can be divided up into different strains:

The most common Mastiff breeds found in America and in Bandogge mixes are the Bullmastiff, Neopolitan Mastiff, and English Mastiff.

Mastiffs of all origins have a protective personality as they’ve been used as guard and watchdogs for centuries.

Their presence inside a home can be calming and peaceful (despite their massive size) as they’re a low-energy dog — until provoked by an intruder.

The coat colors of a Mastiff depends on its background. The English Mastiff, for example, has short fur with black coloring on its ears and muzzle. 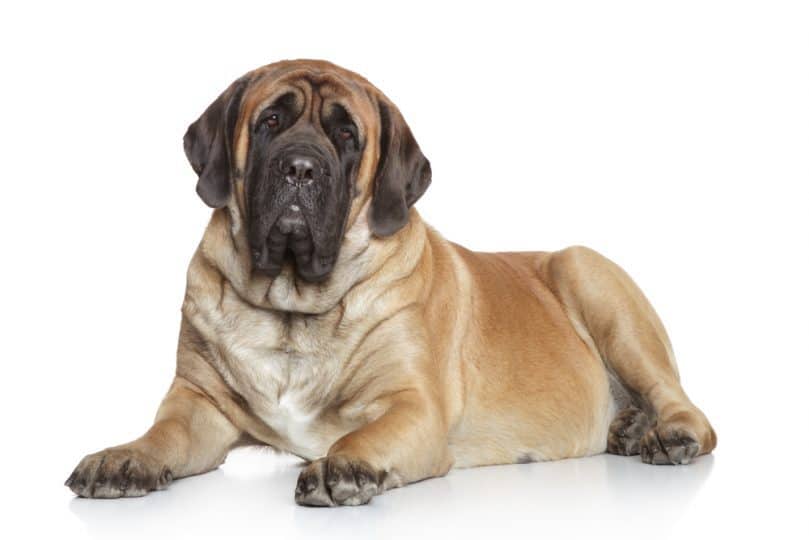 The Tibetan Mastiff, on the other hand, looks pretty close to a lion. It has flowing fur to keep it warm in the mountains with black, brown, and red patches.

The American Bandogge In A Nutshell

Because the Spanish, Tibetan, and Pyrenean Mastiffs are so rare to find in the United States, we can cancel their genes out for the American Bandogge.

It’s highly unlikely that an American Bulldog mated with a Tibetan Mastiff for geological reasons.

The American Bandogge has a similar physical shape to the American Bulldog and American Pitbull Terrier.

It has large, protruding muscles, a short muzzle, and stiff fur.

At approximately 21 inches (53 cm), it has a similar height to the American Bulldog and American Pitbull.

However, the weight of a Mastiff also comes into play. The American Bandogge is much heavier than your typical American Bulldog or Pitbull at 120 pounds (54 kg).

The most common coat colors for this mixed breed are brindle, black, brown, and fawn.

As for its health issues, we can trace them back to the American Bandogge’s parent breeds, which include bloat, hip and elbow dysplasia.

Here’s a tip: to avoid expensive medical bills, only purchase an American Bandogge from a reputable breeder who has done health testing.

The lifespan of the American Bandogge is about 10 years.

One other thing to mention is that most Bandogg mixes are not recognized as a standardized breed by many major kennel clubs.

The only exception is the American Bandogge Mastiff, which is registerable with the United Canine Association and can participate in dog shows and events. 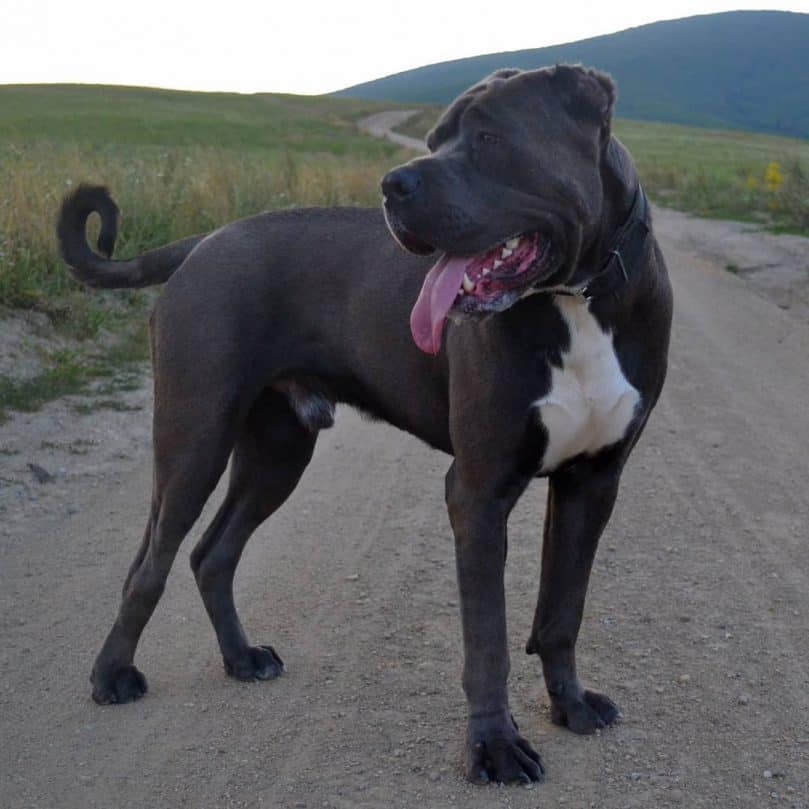 Pros And Cons Of The American Bandog

Still on the fence about whether the American Bandog is the right dog for you? Hopefully, this list of pros and cons will help settle the score.

The pros are this dog is large and intimidating, which means no one will want to mess with you on the street.

The American Bandogge is very intelligent and easy to train if the owner is experienced and confident.

Very little grooming is required of this breed. It sheds minimally throughout the year and may only need a light brushing every now and then.

But keep in mind that it’s not considered “hypoallergenic.”

The downsides of owning an American Bandogge are mostly tied to its parent breed’s aggressive backgrounds, especially the Bullies.

There are some geographical restrictions for the American Bandogge. Some apartment buildings, neighborhoods, and even countries may deny you entry.

For example, Bandogs are now illegal in Romania, Switzerland, and some parts of the United States.

This mix is not ideal for first-time dog owners as it could easily overpower you.

At home, the American Bandogge may become destructive if left alone for long periods of time and many websites claim it’s too massive to have around babies and toddlers.

Lastly, because of its size, owning an American Bandogge could get expensive. Think about all the food and space it needs! 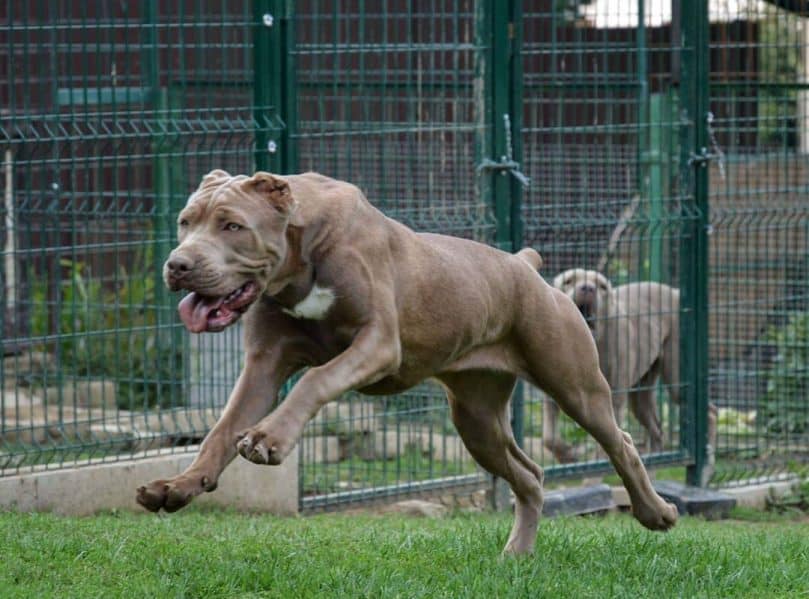 The topic of aggression keeps coming up in the article.

Multiple news agencies have reported American Bulldog and American Pitbull attacks over the years, and the aggression level in a Mastiff depends on its background.

Both parent breeds have a history of being excellent watchdogs and guard dogs as they’re all members of the Working Group.

Pitbulls especially are known for their lock-jaw (although some say that’s a myth) and powerful bite force.

To get some answers, I turned to American Bandogge owners/experts to see what they’ve said.

Bandogges of all kinds have above average aggression levels if not trained or socialized properly.

This behavioral trait makes them illegal in some areas.

The overall temperament of an American Bandogge is loyal, active, and protective.

It could live in a house with older children and other animals if introduced and socialized at an early age.

DO NOT buy this dog is you cannot train it properly, don’t know how, or don’t have the time. 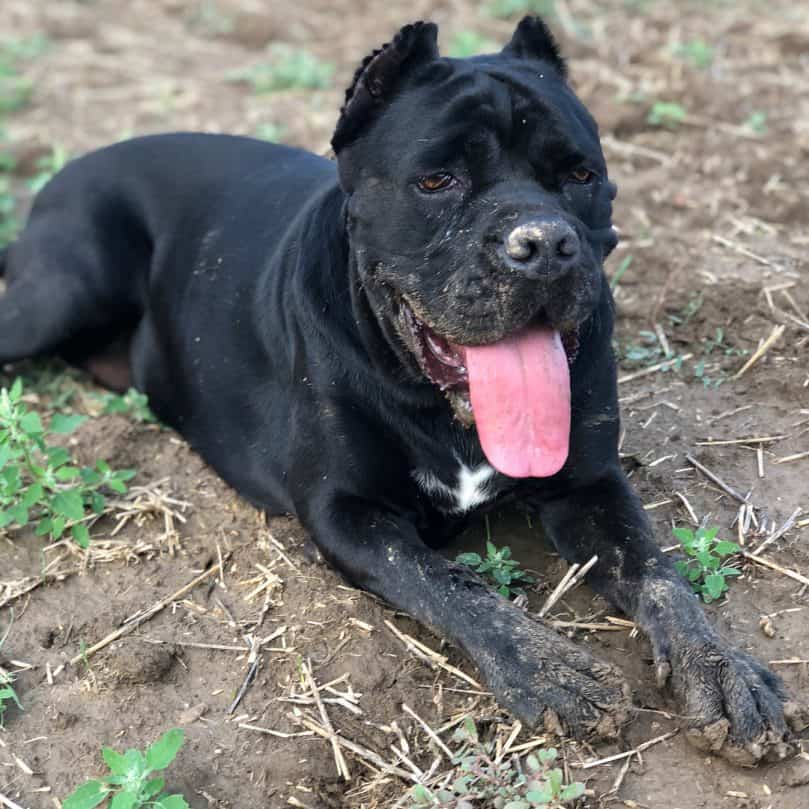 Daily Needs For The American Bandogge

For exercise, this mix needs to get outside at least once a day for about 45 minutes.

It does best in an environment with mental and physical stimulation to avoid tearing up the house.

The American Bandogge can be calm and relaxed inside a house or apartment of any size as long as it can release its energy elsewhere.

In terms of feeding, this dog needs 4-5 cups a day divided into two meals.

Begin training as soon as possible in public spaces (like the dog park) and at home with other pets or with children, if you have them.

The longer you wait, the harder training will be.

Watch this video to see how friendly and playful the Bandog can be with other pups.

Where Can I Get One?

Although I have listed some rescue and adoption websites here, this mix is not the type of dog you should get from an unreliable or unfamiliar source.

Last Words On The American Bandogge

I wouldn’t be surprised if this breed received mixed reviews.

Some owners love the challenge of raising a sweet dog with an ugly reputation (or an ‘ugly’ face – just look at the Chinese Crested), others fear it could end in disaster.

The right owner for an American Bandogge is someone who has experience with larger Bully breeds, the confidence to be the Alpha, and time to train it.

The wrong owner for this mix is someone who’s shopping for their first dog and wants an easy, laid-back experience.

Do you think you could handle the American Bandogge? Comment below and let us know!