Red Nose Pitbulls: The Ultimate Dog for the Committed Owner 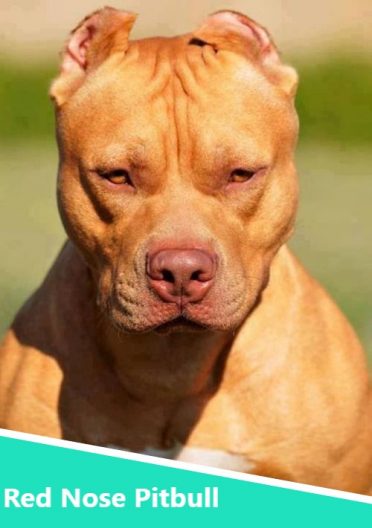 The Red Nose Pitbull is a type of American Pitbull Terrier characterized by its nose color being rusty red. This breed is just like the blue nose pitbull, with the only difference, that this one happens to have a red nose. They are medium-sized dogs, at about 17 to 20 inches tall.

Despite their popularity, the Red Pitbull or Red Nose Pit is rarely seen. It is not a separate breed of Pitbull; rather it is just a specific color variation.

Red Nose Pitbulls are striking dogs with their distinctive rich chestnut-red coat. Mighty and proud, they make great family companions and are superb with children when bred and raised correctly.

Yet what makes them a good pet? How easy is it to train Red Nose Pitbull puppies and what to expect from them?

The History of the Red Nose Pitbull: Its Irish Roots 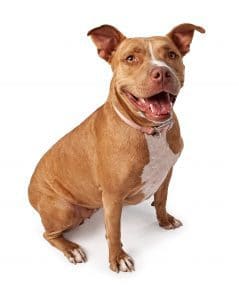 During the 1800’s, the English mixed Bulldogs and various breeds of terrier together to develop the Pitbull. The aim was to create a fighting dog capable of taking on bulls and bears.

Later, unscrupulous owners started pitting Pitbulls against each other too. What they created was a medium-sized, dominant dog with a feisty attitude and a zest for life.

In the mid-1800’s, the Irish started to become fond of the red colored Pitbulls that would crop up from time to time in litters of puppies.

By inbreeding related animals of the same color from the “old family” strain of Pitbulls, they were able to perpetuate the genes, and Red Nose Pitbulls became more common.

When emigrating Englishmen decided to cross the seas and move to America, they took the Red Nose Pitbull (and other colors) with them. Now, instead of being primarily fighting dogs, their role changed to protectors of homesteads and family companions due to their fiercely loyal nature.

Despite its popularity, the main governing body of the dog show world, the American Kennel Club, still refuses to recognize the Pitbull of any color. They argue that it is not distinct enough from other breeds such as the American Staffie or Staffordshire Bull Terrier.

If you do wish to show your Red Nose Pit, the United Kennel Club does recognize the breed. With a breed standard in place and regular shows up and down the country, you can register puppies with them providing both puppy’s parents are also registered.

How do you identify a Red Nose Pitbull?

To decide if you have a true Red Nose Pit you should look to certain areas of the dog. The nose, lips, eyes, and toenails should all be the distinctive copper red-brown color.

The red colored coat may be solid or interspersed with white patches.

What should I look for when choosing a Red Nose Pitbull puppy? 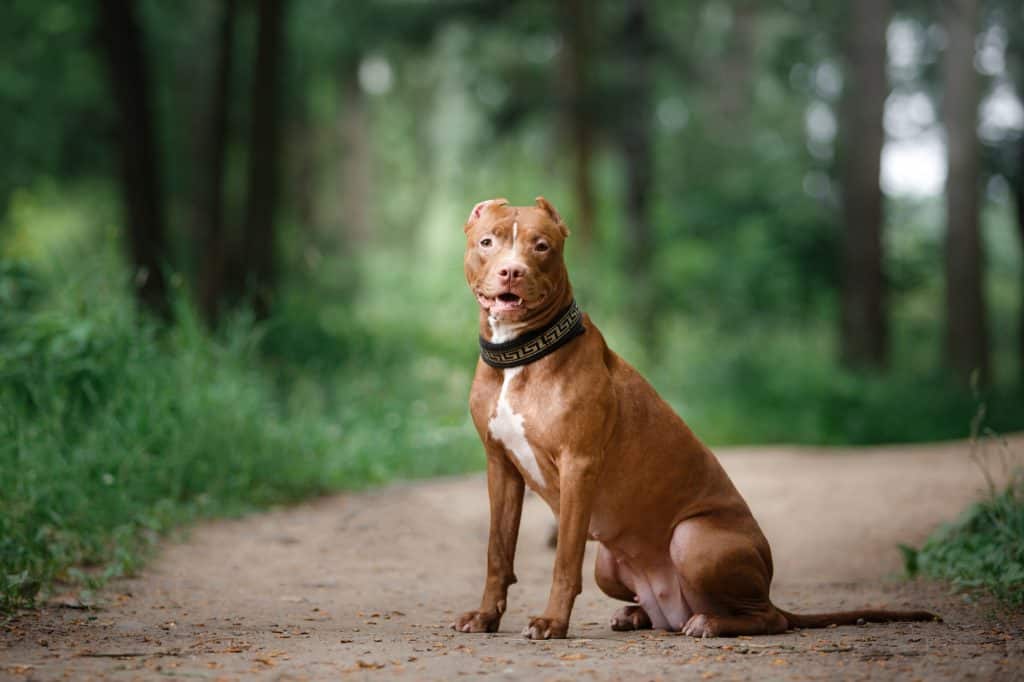 Ensure the breeder of your Red Nose Pit is producing puppies because they love the breed and not just to make money.

As the color can be more easily achieved through inbreeding closely related individuals, this can also cause recessive health problems to come to the fore too. Do not compromise the health of your dog just to get this color; it can cost you money and heartbreak in the years to come.

To avoid this, ask to see the puppies paperwork if they are registered. The paperwork should show you the parents, grandparents, and great-grandparents at the very least. Ensure the same dog’s name does not crop up more than once. If they are not registered, ask the breeder if the parents are in any way related. You may have to take their word for it.

Meet the parents of your puppy to ensure they are friendly. The puppies should be well handled and confident enough to come up to you.

Distinguishing a Red Nose Pitbull in a litter should be easy. The red on the eyes and nose are the easiest to spot, and on closer inspection, the puppies should allow you to check the toenails and lips.

As the color is recessive, either both parents will have to be red themselves, or one may be red and one “carries the color” (i.e., had a red parent itself). Alternatively, both will have had to be “carriers” – i.e., the grandparents will have been red.

Do Red Nose Pitbulls cost more than other colors of Pitbull? Where do I find one?

Red Nose Pitbull puppies (like the Blue Nose Pitbull) are far more expensive than other colors such as brindle, black, white and tan. Breeders can charge several thousand dollars although this can vary. Remember that price is no indication of a well-raised puppy.

If you do buy from a breeder, go along and meet the owner before you take your puppy home. Look to see how the dogs are kept and ask if they are health tested. Do they keep puppies from their litters or just breed to sell them and make money? 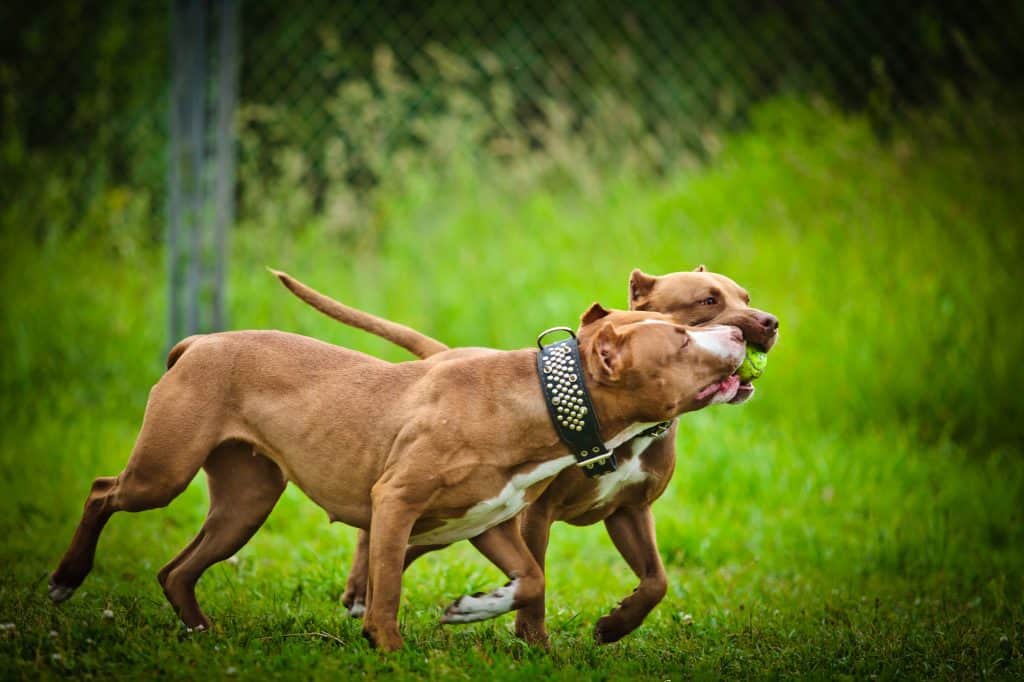 An alternative is to adopt a Pitbull from a shelter. Pitbulls are the most popular dog to breed in the US, yet it is estimated that nearly 1 million Pitbulls, Pit crosses, and Pit types dogs are euthanized each year. By taking your time and speaking to rescues, you are likely to be able to find a Red Nose Pitbull that needs a loving home.

Can’t afford it? There are many other breeds of dog out there that are just as unique. Have a look at the Red Heeler, the White German Shepherd or the majestic Chow Chow to name a few.

These dogs love people. Separation anxiety can be a big problem for them as they find being away from their owners hard. To avoid this problem, gradually acclimatize your Red Nose Pitbull puppy to being left alone for increasing periods of time. As an adult, you never want to leave your Pit alone for more than 3-4 hours in total.

After an hour or two running in the park getting rid of their excess energy, a Pitbull likes nothing more than curling up on the sofa with their owners and enjoying lots of cuddles.

Excellent with children providing they are brought up with them, and the children respect them in return, Red Nose Pitbulls are incredibly loyal dogs who will defend both your home and family from any potential threats.

A Red Pitbull is not suited to an apartment life 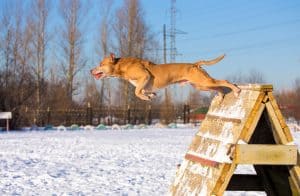 Not only are they large, but due to their history the Pitbull is also incredibly muscular; this is a dog with power. A small apartment will soon feel cramped with a Pitbull in it; it is imperative to have enough space and a yard of some sort too.

Enjoy hiking? So will a Pit. They can also turn a paw to agility too!

A Pitbull’s loyalty has sadly been exploited by many

With such a loyal nature, the breed has unfortunately been taken advantage of by unscrupulous people. Uncaring owners have taken a friendly breed and through lack of training and socialization, made their dogs aggressive either to fight other dogs or as status symbols. Pitbulls are now banned in several countries, especially in Europe where they are no longer welcome in the United Kingdom, France, Spain, and Italy.

Make no mistake; the Pitbull is a big dog capable of doing serious damage in the wrong hands. However, one thing I would like to make very clear here, breed-specific legislation like this is flawed and doesn’t work.

ANY dog can become aggressive if poorly trained or bred from aggressive parents. As being said above, when searching for Red Nose Pitbull puppies, ensure the breeder is breeding them for the love of the breed. Meet the parents. Make sure the puppies are well handled.

With training and the correct socialization, Pitbulls are amazing dogs 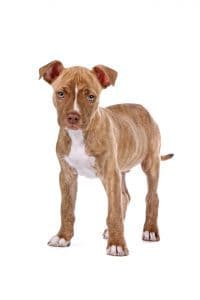 Red Nose Pitbulls, like all Pits, are intelligent dogs; although do not expect the immediate responses to commands like those seen in a Border Collie.

Appropriate early socialization is vital, which can be continued with puppy training classes as soon as your puppy is vaccinated. Training a puppy can be hard work, yet put the effort in when they are little, and you will be rewarded.

While Pits are very people friendly, do not neglect socializing them with other dogs. Dog on dog aggression can be a problem with this breed especially if they have a negative experience as a puppy – it will stay with them, and it can be hard to retrain them after this.

Neutering both males and females can make them more amenable to other four-legged friends and is highly recommended. Taking on an adult Pitbull that has a dog on dog aggression problems can be a challenge and is for experienced owners only. Always muzzle them when out in public if you are concerned.

A Pitbull in a kennel is not a happy dog

If you decide a Red Nose Pitbull is the dog for you, please don’t keep them in a crate all day. For a breed that craves human companionship, this is the equivalent to keeping them in prison.

Their coats are short and fine and lying on the concrete or hard floor for hours on end will leave them prone to sore hocks; where the hair wears away and the exposed skin then becomes red and raw.

Saying this, they will need access to a secure, well-fenced yard. They are good jumpers and will some exploit any gaps in the fence! 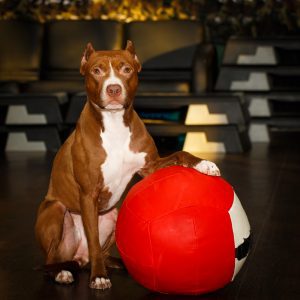 The Red Nose Pitbull, like all Pitbulls, is a hardy breed that can live for 12-14 years if well looked after.

Main health problems include hip dysplasia and degenerative myelopathy; both of which can be genetic and passed from parents to puppies. Ensure your Red Nose Pitbull puppy’s parents have had their hips scored (to ensure they are healthy) and ask if either parent has been gene tested for myelopathy.

Kneecap dislocation can also occur as they are big dogs who can twist the knee if landing awkwardly (similar to many big breeds such as Rottweilers and Dobermans). Owners should look out for signs of lameness.

Skin allergies can also be a problem with Pitbulls. If your Pitbull is itching excessively or has red, inflamed skin, take them to your veterinarian for treatment.

The American Pitbull has a huge fan base

Owning a Pitbull puts you in good company. Not only were they the breed of choice for former Presidents Theodore Roosevelt and Woodrow Wilson, but the film stars of old Fred Astaire and Humphrey Bogart were also smitten with these exceptional hounds.

More recently Pit and Pit crosses have been bought or adopted by celebrities such as Kaley Cuoco, Jessica Biel, and Jamie Foxx.

A Red Nose Pitbull is not just a dog; it becomes an integral part of any family. Majestic and loyal, the breed needs firm but fair handling and correct training from a young age. In return, you will be rewarded with a Pitbull that you are proud to own who adores their family.

Own a Red Nose Pitbull? Let me know in the comments below or ask any questions you may have!