A Guide to the 11 Best Japanese Dog Breeds 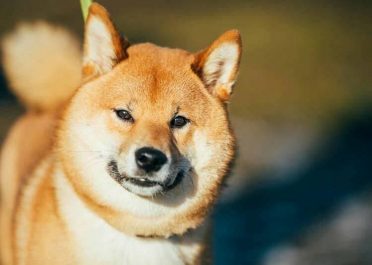 These superstar pooches are not only beautiful, but also possess colorful histories and origins that have shaped unique, strong, and intelligent canines that are coveted as working dogs and companions. 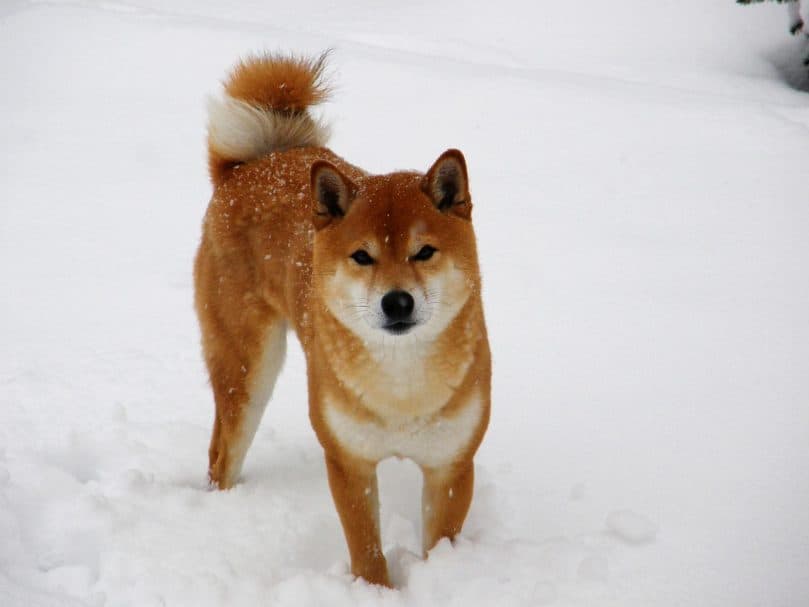 The Shiba Inu may be small in size, but this fella has a huge personality! She is thought to be the most ancient of the 6 original Spitz dogs of Japan, surviving through WWII and near extinction to represent the breed as it is known today.

This 20-pound Japanese dog breed looks like a fox with her prick ears, orange and white coat and almond eyes, but the Shiba Inu’s athletic build and agility have established her a stealthy hunter.

The Shiba Inu is highly intelligent, but couple that with her spirited nature and you’ve got a mischievous one on your hands.

This breed is known to be stubborn, but early training and socialization helps curb this behavior.

If you want to own one of these little fur balls, get ready to fork out anywhere from $1,500 to $3,500 for a Shiba Inu puppy from a reputable breeder. 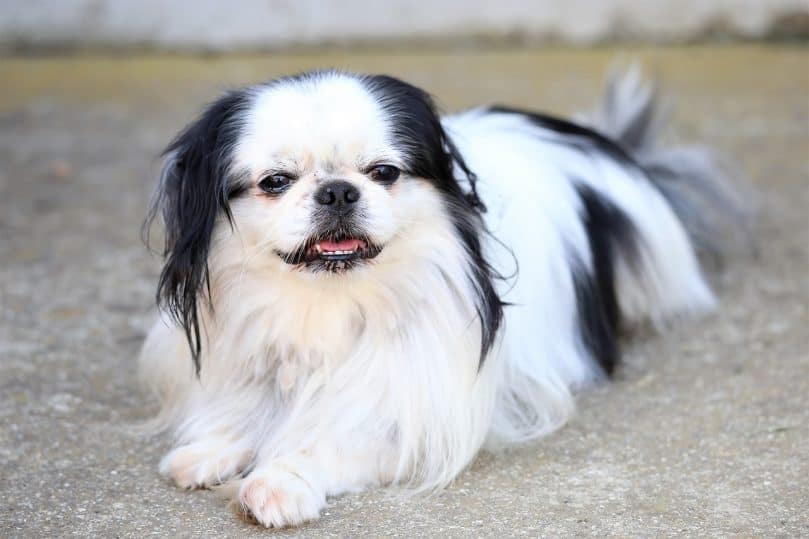 The Chin is an interesting dog to look at with her smashed face, spaced-out eyes, and feather plume of a tail.

This is one of the oldest Japanese dog breeds, who lived in the imperial courts. She has retained an elegant air throughout the decades, with a thick coat of long, silken fur that has a feathered texture all over the body and head. It comes in two-tone colors of black and white or red and white.

The Chin is said to possess feline-like qualities that makes for an interesting personality overall.

For one, this small Japanese dog loves to jump! It isn’t uncommon to find the Chin leaping from furniture to furniture or resting in high, unusual places! So, don’t be surprised if you find her curled up on top of the coffee table.

The Chin steps daintily and will lick herself clean. She also bats at toys like a cat!

Temperament-wise, you can’t get any better when it comes to family dogs. The Chin is friendly towards everyone, playful and well-mannered.

If you’re in the market for one of these cutie pies, expect to pay anywhere from $1,500 to $2,500 for a puppy from an ethical breeder. 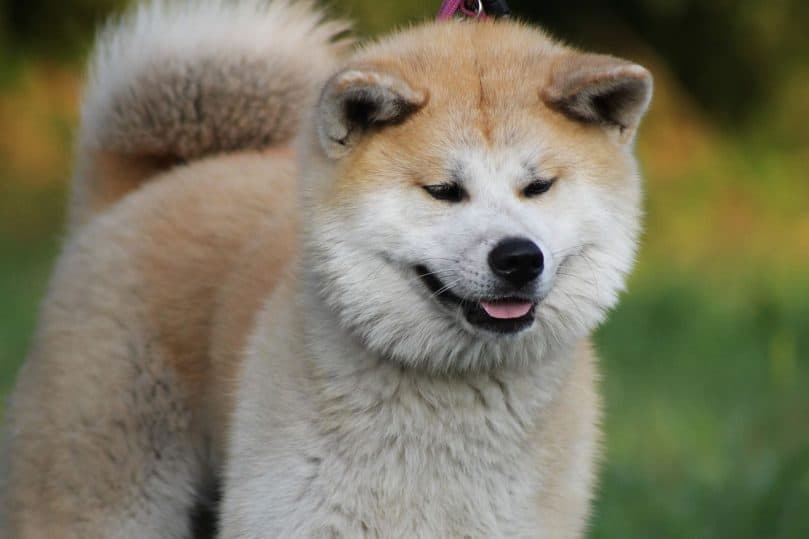 The Akita Inu is the largest of the Spitz breeds from Japan, with a lengthy history not unlike that of the Shiba Inu. This ancient canine almost disappeared during WWII, but passionate breeders kept the Akita alive.

One of the most revered figures in Japan is Hachiko, the Akita Inu. This dog became a symbol of loyalty in Japanese culture because he would wait at the train station for his master to return from work, even after he passed away.

The Akita Inu stands 26 inches (66 cm) tall and weighs up to 120 lbs (54 kg). She is muscular and well-proportioned with a broad head, pointed ears, and almond eyes.

This breed is a bit on the moody side. Don’t get me wrong. With training and socialization, she loves family members and is as faithful as a companion dog can be.

But, the Akita is aloof in nature, doesn’t like to have her food or toys tampered with, and can be unpredictable around strangers and other dogs.

You can expect to spend anywhere from $750 to $2000 for an Akita Inu puppy from a reputable breeder.

Did you know there is an American Akita that is a separate breed from the Japanese Akita? You can compare them in this video: 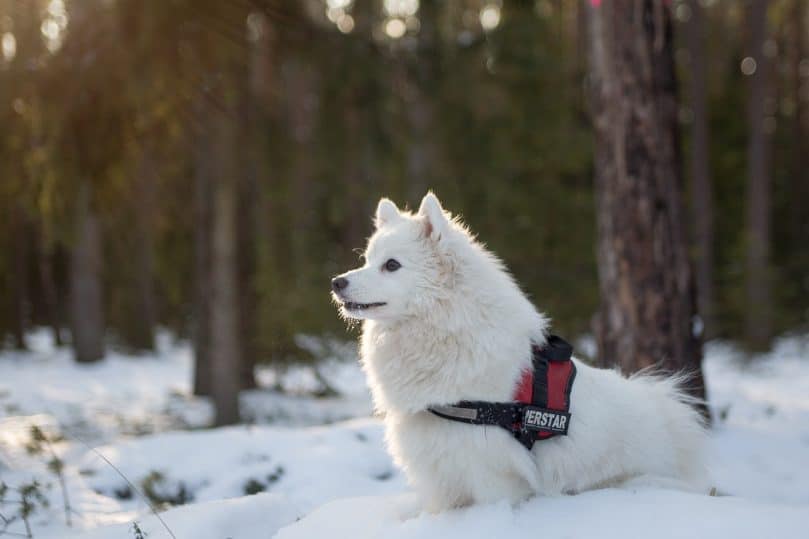 The Japanese Spitz is the offspring of the German Spitz, brought to Japan from China in 1920. In 1925, two White Spitz were imported from Canada. These dogs were the original descendants that created the modern Japanese Spitz.

This dog is a little spitfire, standing alert and ready to bark like mad if a stranger approaches the home. This common behavior has earned her a reputation for being a natural security alarm system.

Overall, the Japanese Spitz is a wonderful companion dog. She loves cuddles and attention, making a great choice for older people and children. She has an energetic demeanor and will play all day long. This breed is also known for being unwavering in her loyalty. 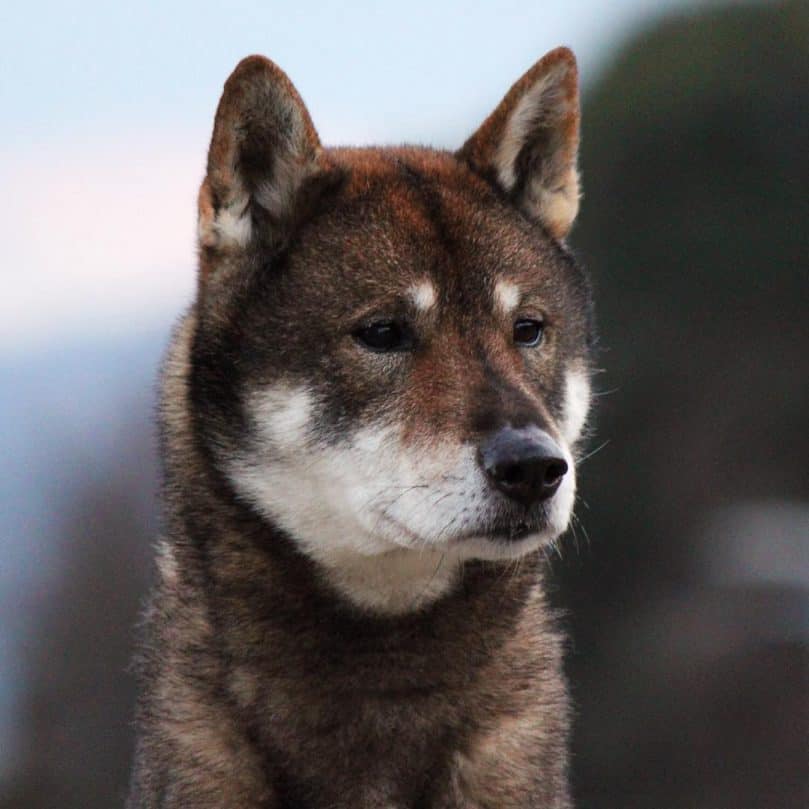 The Shikoku dog is another beloved Spitz, bred for hunting boar on the Island of Shikoku. It resembles the Akita and Shiba Inu in appearance, but is mid-sized with an instinct for the wild.

What do I mean by wild exactly? This is one of many domestic dogs that look like wolves.

The Shikoku differs from its Spitz cousins in that it has a beautiful, thick coat that comes in 3 shades: black sesame, red sesame and white. A triangular face and prick ears add to her wolf-like features.

This medium-sized Japanese dog breed loves the outdoors. In fact, for centuries Shikoku dogs roamed the wilderness freely to hunt and explore.

This was allowed so that the breed would retain its primitive nature. The desired instincts stayed intact, but also lead to traits of aloofness and strong-willed independence.

What is amazing about the Shikoku is its naturally adaptive behavior. Even though it thrives outside, it also loves to be indoors.

You’ll see the wild animal antics melt away and the Shikoku will cuddle up on the couch like a big baby, kissing and begging for belly rubs. This Japanese dog craves to be touched!

This is a rare breed that is difficult to find for sale outside of Japan. You’ll spend upwards of $2,000 for a Shikoku. 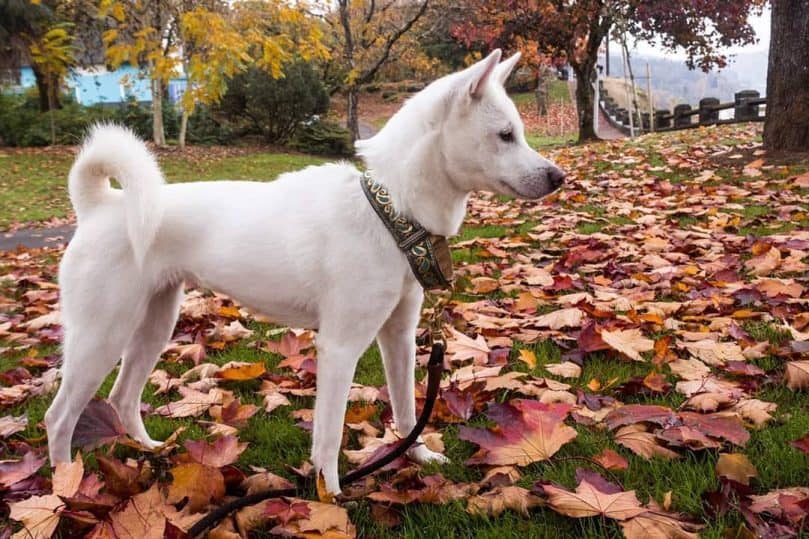 Introducing the Kishu or Kishu Ken, a Japanese dog breed that has been around for thousands of years. This medium-sized canine originates from the Kishu region and was once used extensively for hunting boar and deer.

She resembles the Akita and Shiba Inu in build, with the typical Spitz triangle face, prick ears and long, curled tail.

The Kishu’s coat only comes in solid colors (to be accepted as purebred). This includes white, black, red and sesame. White is the most common coat color.

This breed loves its family and is affectionate towards children. She will be 100% devoted to her single owner or family and to no one else.

Kishu is intelligent, alert, competitive and playful. Watch out for pack instincts, where she will try to dominate other pets. You need to show this stealth hunter who is boss.

If you reach out to well-known, honest breeders, you can expect to pay from $300 to $500 for a cute Kishu puppy. 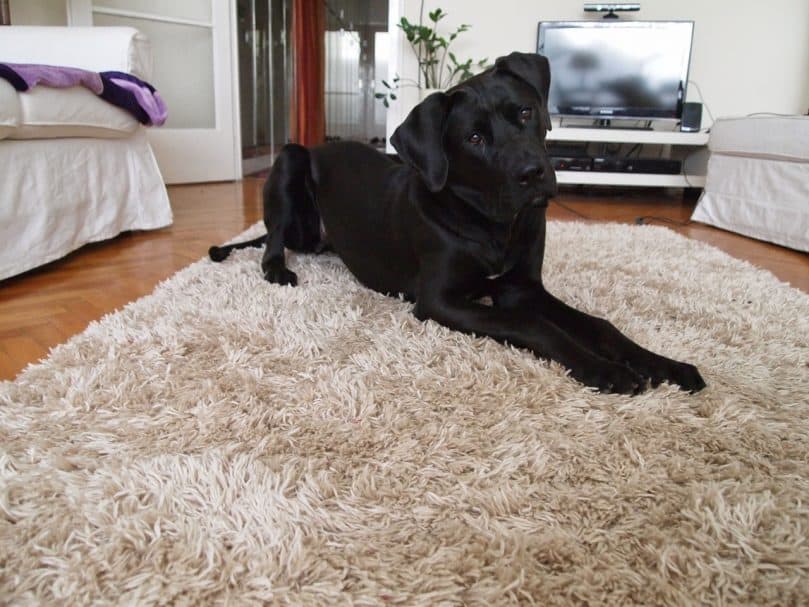 The Tosa Inu is definitely the muscle of the Japanese dog breeds. She is a beast of a canine, weighing up to 200 lbs (90 kg)!

The Tosa looks different from the Spitz pack, with a massive head and square muzzle. The jaws are wide and powerful, with velveteen ears that hang down on the sides of the head.

The Japanese Tosa dog was bred for fighting in Japan. She can be fearless and protective as a guard dog, but is also known to show aggression if not trained properly.

She likes to assert dominance and needs a steady and experienced owner. This huge Japanese dog breed is not recommended for first-time dog owners. 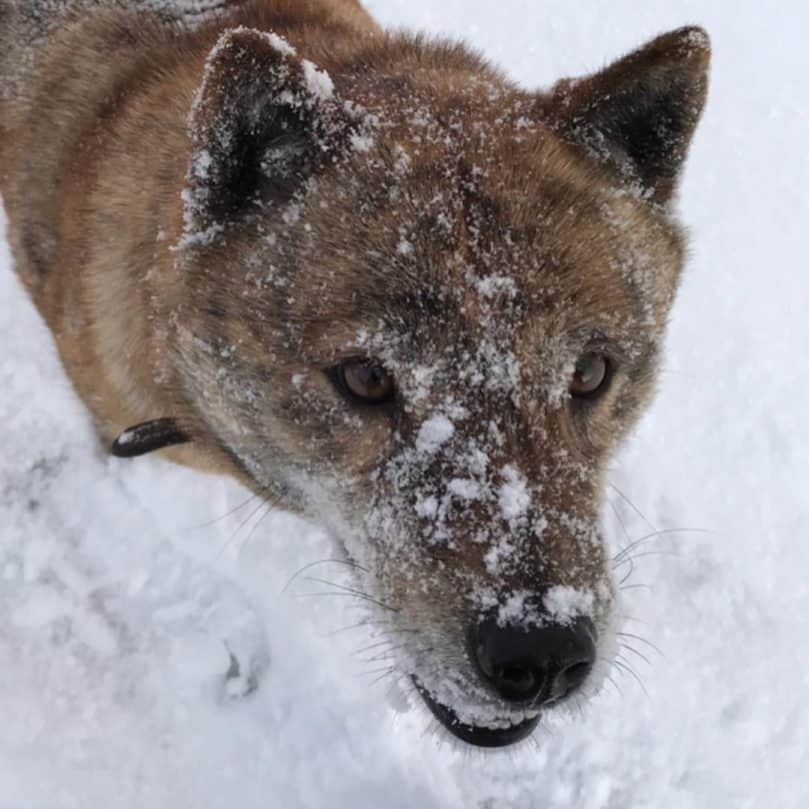 This is the super dog of the Spitz family! No kidding, this mid-sized dog is built to withstand extreme cold and snow, with strong bones, thick skin, and unwavering stamina.

The Hokkaido was used for hunting, so it’s no wonder she is at home in the rugged outdoors. Also used as a working dog to help keep kennels in order, she is easy to train and intelligent and has a dominant streak.

One distinguishing characteristic is the Hokkaido’s phenomenal sense of smell. This breed has the ability to find their way back home from hundreds of miles afar.

The Hokkaido loves her family and will stick by their side no matter what happens. She especially adores kids and will show her affection with kisses, cuddles, and an eagerness to play.

A Hokkaido puppy will cost $300 to $400 coming from a reputable breeder. 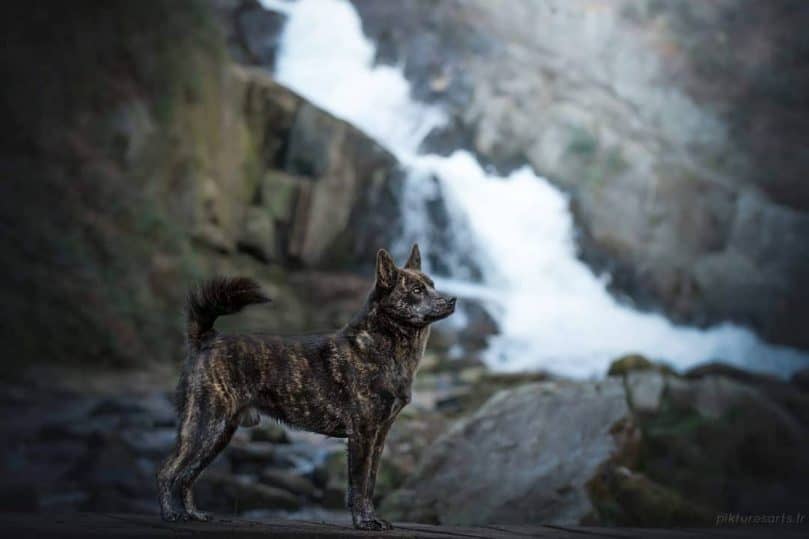 The Kai Ken is a striking Japanese dog, sometimes referred to as tora, which means “tiger” in Japanese. This is due to her brindle coat of golden stripes against dark fur, which serves as camouflage during hunting sessions.

The Kai Ken is quite the rough-n-tough athlete, with the strength and speed of a dog, but the agility and nimbleness of a cat. She can conquer the most intimidating terrain and will do so to win the hunt.

Kai Ken was bred for work, but can make a wonderful companion dog with the right training. She harnesses the same Spitz loyalty that assures you will be the center of her world, but don’t expect her to love other dogs or children the same way. 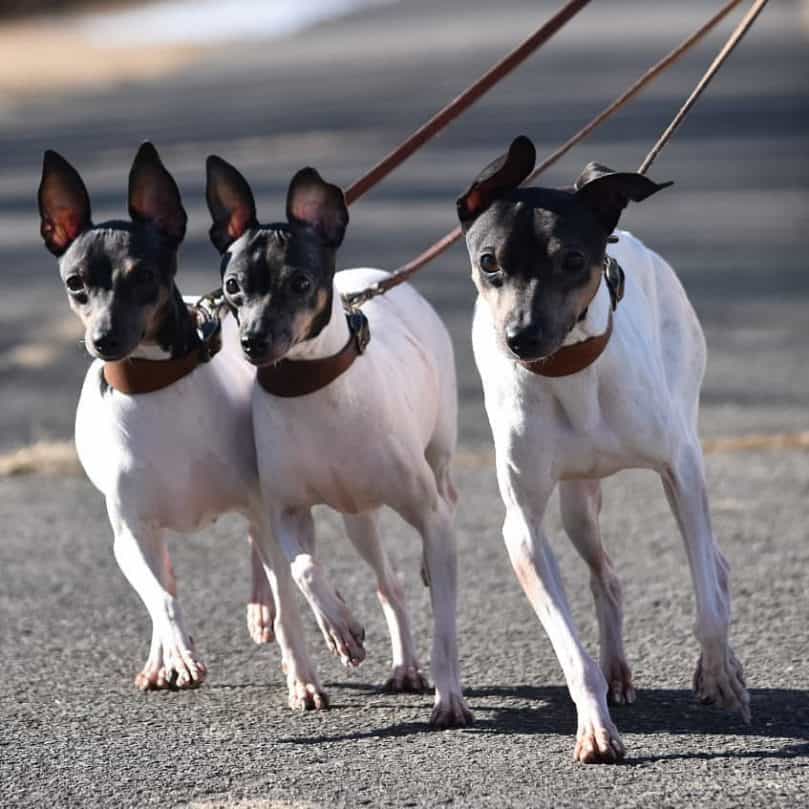 This rare breed goes by other names as well, including Mikado, Nihon, Nippon, or Oyuki Terrier. She is one of the Japanese miniature dog breeds that makes a wonderful companion.

The Japanese Terrier only reaches about 13 inches (33 cm) in height, with a slender build and a short, dense coat of stiff fur. Usually the coat will be white and black or white and tan. The head is generally black.

If you want a cuddly best friend that poses no biting danger, the cheerful little Nippon will always be there to brighten your day. Sometimes they will even attach to one particular person in the family, becoming highly protective of them.

As well, they get along beautifully with children and other dogs and pets – just make sure they aren’t smaller than the Japanese Terrier. All of that loving possessiveness leads to another less desirable trait: jealousy.

Overall, they are wonderful family dogs that are eager to please and easy to train. You can expect to pay on average $600 for a Japanese Terrier puppy. 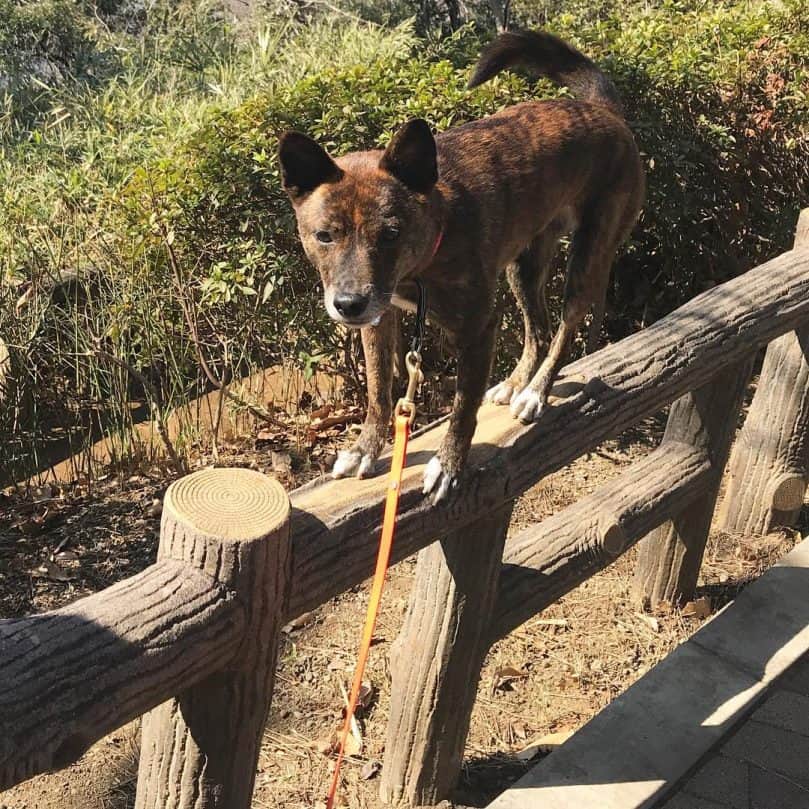 This rare dog from Okinawa is slowly declining in population but was once widely used as a tracking and baying dog for hunting wild boar.

This is a mid-sized dog with the muscular build and stamina of the Hokkaido and the brindled, dark coat of the Kai Ken.

What really sets Ryukyu apart from other dogs, though, is its dewclaw. This is an extra claw on the back of the paw. It is believed that this vestige evolved after the Ryukyu spent years living in the rain forest. It would use these claws to climb trees.

Temperament-wise, you can expect this dog to be confident, alert and brave. If trained and socialized from a young age, they make calm and devoted family dogs. They are even used for therapy work.

Ryukyu does have a tendency to display pack leader behavior, so you need to assert yourself as the one in charge to keep this clever pup acting her best.

I wasn’t able to find a definite price for Ryukyu puppies, which exemplifies just how rare this unique Japanese breed is!

Conclusion: Which Japanese dog breed is your favorite?

Native Japanese dog breeds are one-of-a-kind, each displaying a unique set of characteristics that make them favored and sought after globally as companions, hunters, working dogs, and guard dogs.

Here is a quick round-up of all 11 breeds that we covered:

Which Japanese dog breed is your favorite? Tell us in the comments!