What Is The Shikoku Dog? We’re About To Find Out 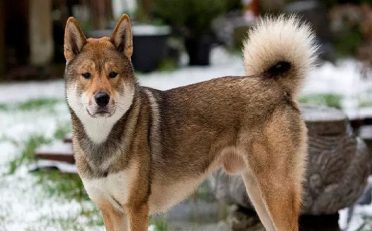 Shikoku is a dog breed that originated from Shikoku Island in Japan, and it’s one of the six native Japanese dog breeds. It’s a medium dog breed size at about 17 to 21 inches tall, weighing between 35 to 55 pounds. The lifespan of the Shikoku dog breed is around 10 to 12 years.

There are a lot of misconceptions surrounding this Japanese dog, and often times, people confuse it for its Akita and Shiba Inu cousins, along with the Kai Ken and Kishu.

To help clarify the situation, I’ll compare the Akita vs. Shiba Inu in this article, the Shikoku Dog vs. Shiba Inu, and the pros and cons of each.

This dog, which is recognized as a purebred by official groups such as the American Kennel Club, got its name from its place of origin — the Island of Shikoku.

The Shikoku Dog was praised by the Matagi (also known as Japanese hunters) for its excellent tracking abilities.

It was used to hunt deer and wild boar.

The Shikoku Ken has a medium-sized build with noticeable muscles, pointy ears, and a curled tail.

Many people claim it has a wolf-dog appearance with its grey fur, but its coat colors can also come in black, white, red, and tan.

A sesame coat refers to the mix of three or more colors.

Here’s an easy way to remember the size of this breed: it’s smaller than an Akita and larger than a Shiba Inu.

I noticed some dog lovers were curious about a mini-sized Shikoku Dog, but since I couldn’t find any mentions about it during my research, I’m pretty sure a teacup version doesn’t exist.

The Shikoku Inu is one of six native Japanese breeds.

It belongs to the Spitz family, which is a type of domesticated dog characterized by long, thick fur, pointed ears, and a curled tail.

In this next sub-section, I’ll compare the Shikoku Dog to other Japanese Spitz breeds. 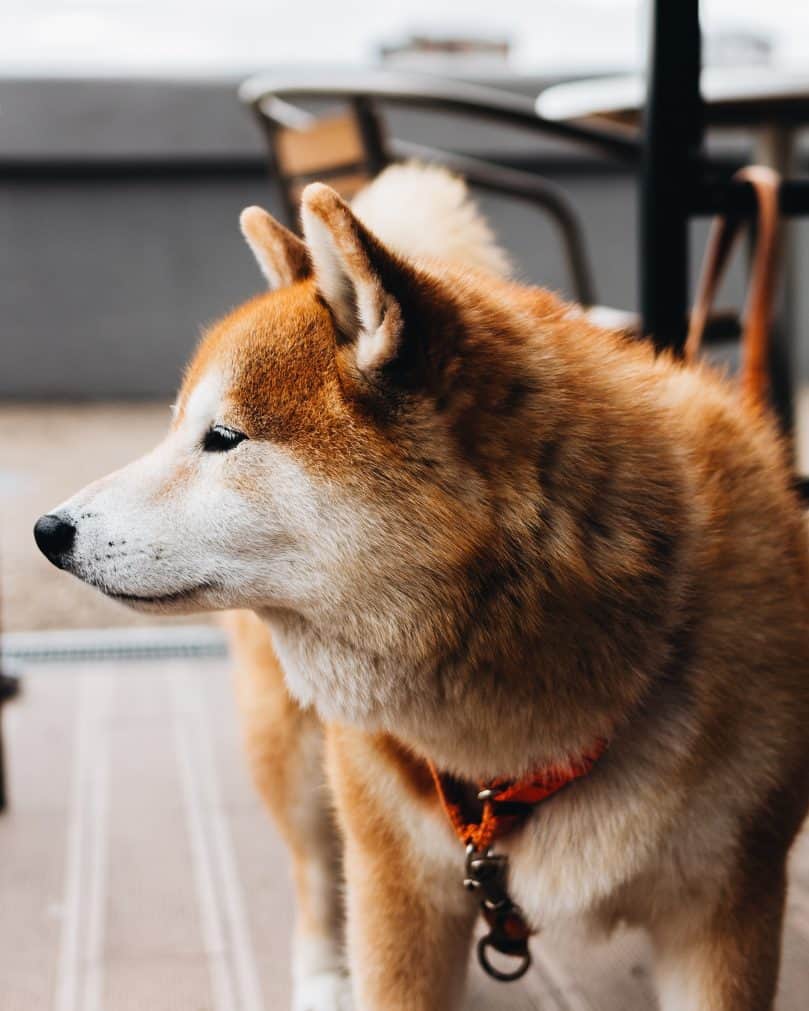 As mentioned earlier, the Shiba Inu is slightly smaller than the Shikoku Inu.

Oh, and by the way, “Inu” means dog in Japanese.

This dog is the smallest out of the six native Japanese breeds.

The Shiba Inu occasionally comes in shades of black and white — but its iconic bright orange fur cannot be seen in the Shikoku Dog.

Both the Shikoku Inu and Shiba Inu have brave and fearless temperaments, but I don’t want to reveal too much about its personality just yet. 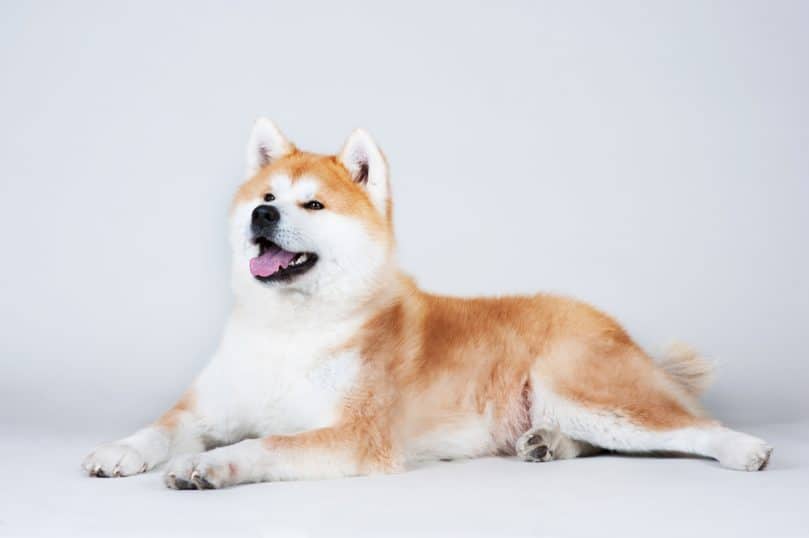 There are two strains of this dog: the Japanese Akita Inu and the American Akita.

The Akita Inu’s coat colors are most frequently found in shades of white and orange, where the American one is primarily black or brown with white markings. 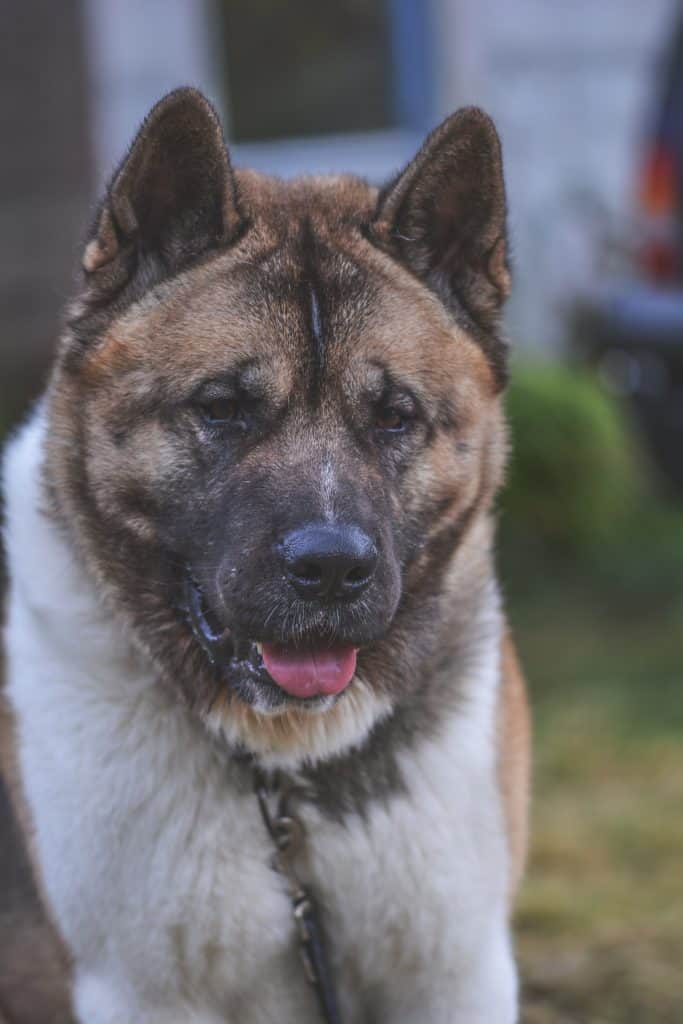 The Akita is noticeably bigger than the Shikoku Dog. It’s considered a large-size breed.

The personality of an Akita is friendly, dignified, and alert.

What About The Kai Ken And Kishu Ken? 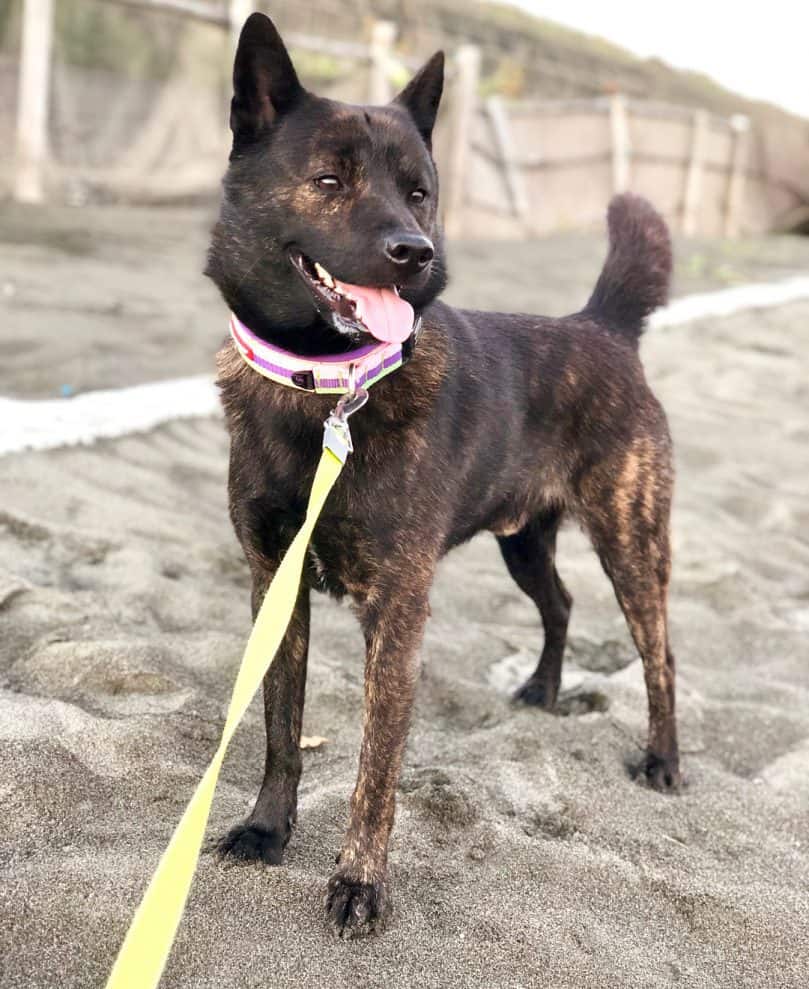 The Kai Ken and Kishu Ken are lesser known Japanese dog breeds, but still often confused for the Shikoku Inu.

The coat of a Kai Ken (a purebred one, at least) is always found in brindle, either in shades of black, grey, or red.

The brindle pattern is not seen in the Shikoku Dog, so that’s an easy way to tell them apart.

These are similar measurements to the Shikoku Ken.

As for the Kishu, this dog is most commonly found with an all-white coat color.

It’s extremely rare, if not impossible, to find a solid-pattern Shikoku Dog.

These are also similar measurements to the Shikoku Ken. 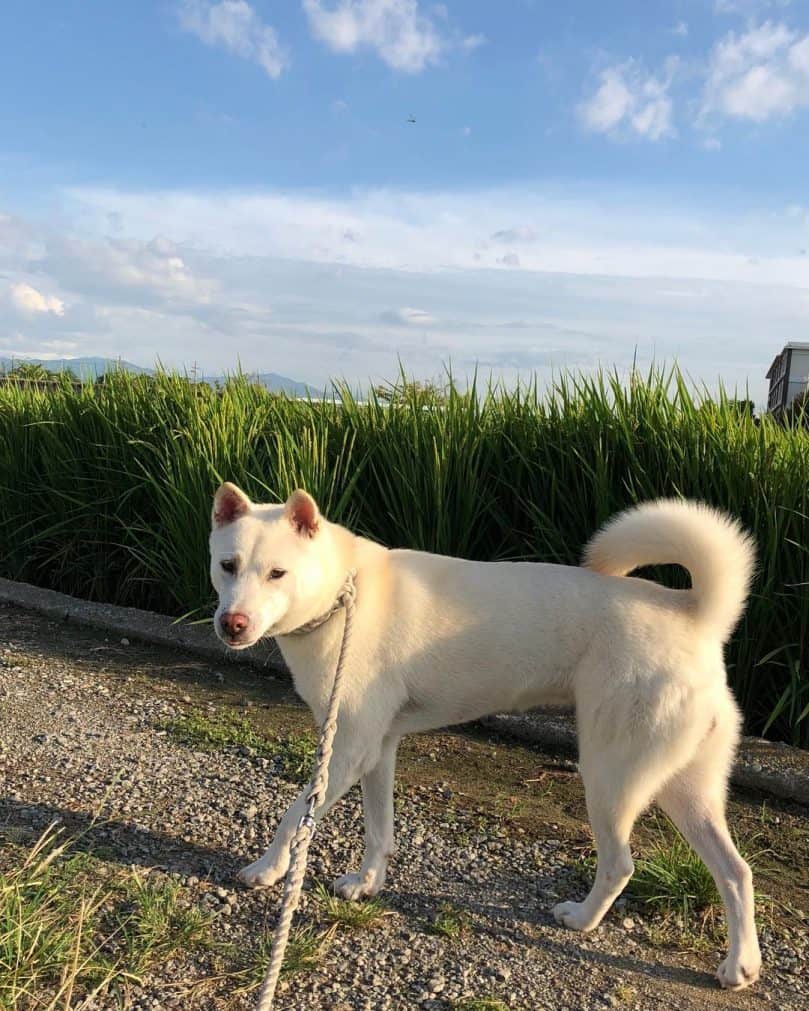 Even though the Shikoku Dog is considered a domesticated breed, it comes from a long history of primitive behavior that is hard to un-learn.

For hundreds of years, the Shikoku Dog was able to roam free in the Japanese mountains without a leash or muzzle, hunting boar and deer with humans.

That’s why you’ll find some modern-day owners who still allow their dog to chase animals in the wilderness.

They want to maintain its primitive nature.

However, you might be shocked the learn that the Shikoku Inu becomes an entirely different dog once its inside with a loving owner.

This breed is tough and adventurous outdoors (it loves all forms of physical activity), but quiet and calm indoors.

The temperament of the Shikoku Dog is intelligent and loyal around loved ones — but cautious of strangers.

This dog is an all-around quick learner, which should make it easy to train.

It’s not as stubborn or independent as other Japanese breeds, such as the Akita. 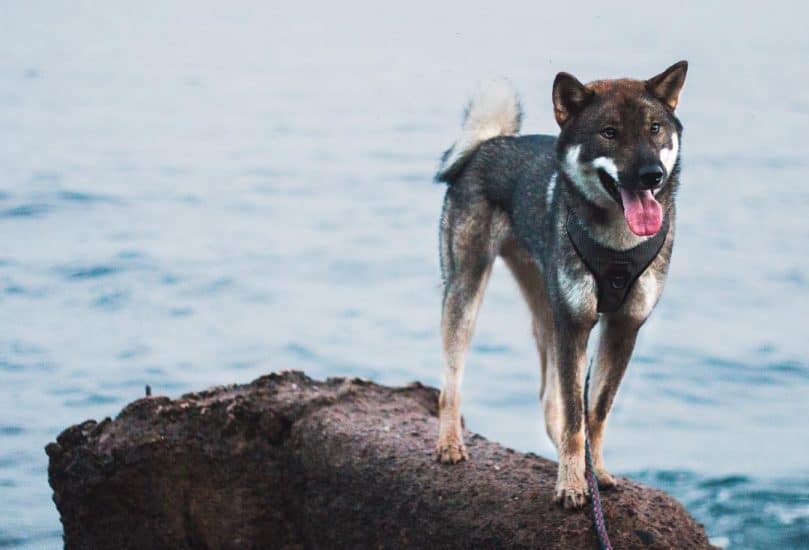 Caring For The Shikoku Dog

Instead, this dog should be carded, which is the technique of safely removing excess hair from the undercoat.

You can easily find carding tools online or at pet shops.

For grooming, it’s best to card the Shikoku Dog 2 – 3 times a week.

This breed is a heavy shedder (not considered “hypoallergenic”) that blows its coat bi-annually in the summer and winter.

For most dog breeds, it’s good practice to trim their nails once they touch the ground and make noise on the floor.

As for feeding, be prepared to spend a little extra on premium, high-quality dog food.

Be cautious of feeding this breed human food off the dinner table as it’s prone to obesity.

If this dog gets a proper workout every single day, it’s happy to relax at home for hours afterward.

Any Health Issues I Should Worry About? 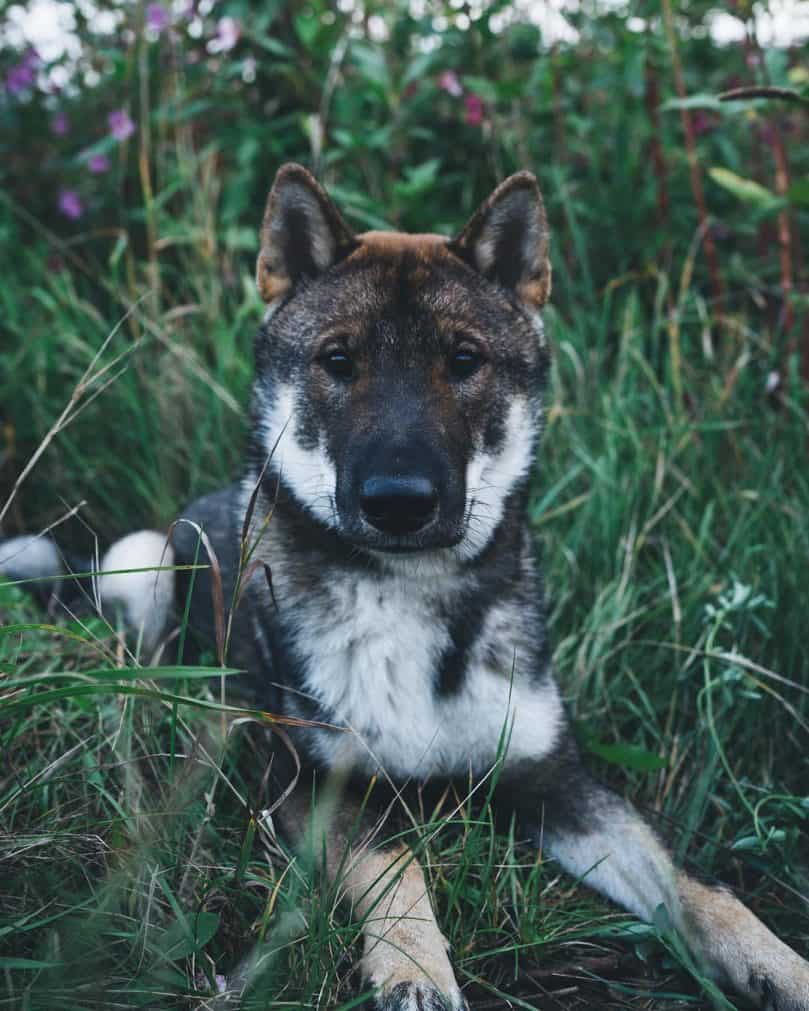 Shikoku Inu owner Shigeru Kato created a list of health issues on his blog in order of most common to least common.

The biggest one is panosteitis, also known as bone inflammation, which can cause joint pain.

But overall, it is considered a healthy breed with minimal life-threatening medical concerns.

As mentioned in the first paragraph the lifespan of a healthy Shikoku Dog is 10 – 12 years.

Living With The Shikoku Dog

Before taking this dog home, it’s essential to evaluate how it will get along with other animals and children.

The Shikoku Ken is naturally protective and can behave territorial and aggressive around strange animals, sometimes even people.

It is capable of living with other dogs if they are socialized properly from an early age.

Because of its intense prey-drive, hopeful owners of this breed should not live with birds or rodents.

Cats, on the other hand, aren’t nearly as straight-forward.

During my research, I’ve seen some Shikoku Dogs get along with cats (even licking and grooming them) — like this one!

There’s no guarantee that a Shikoku Inu and a cat will like each other, so proceed with caution and introduce them as soon as possible.

The size of your home, whether it’s an apartment or large-scale house, doesn’t matter to this breed as long as it can release its energy outside.

I’m Ready To Take One Home! 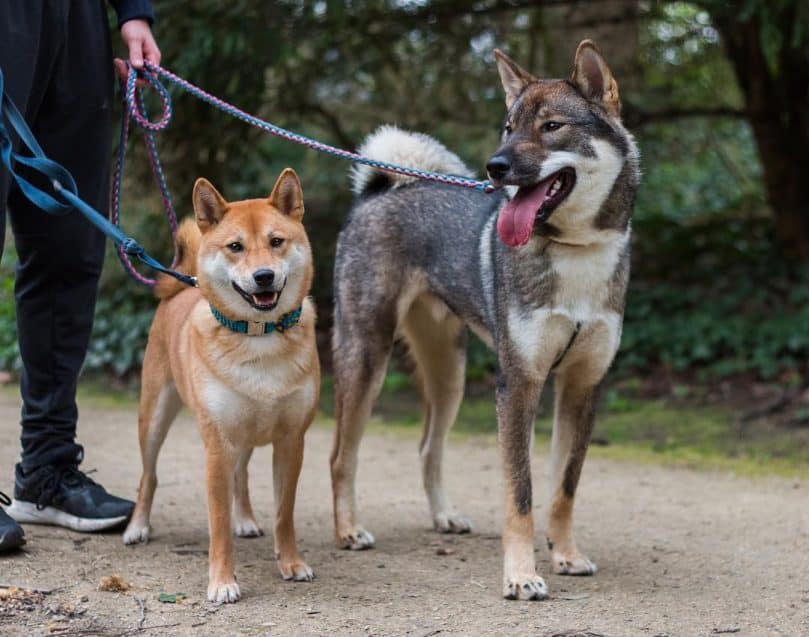 As a society, the Japanese are highly protective of this dog.

They want to preserve this breed as a purebred, without any external influences and keep it as local as possible.

Most Shikoku Dogs must be imported directly from Japan, which as you can imagine, costs a lot of money.

Luckily for you, I found this Facebook page of a list of all the breeders outside Japan (there are only five in the US and three in Canada).

As for adoption or rescue websites, you may be out of luck.

Puppy Finder is a good place to start, but at this present moment, they haven’t listed any available Shikoku Dogs.

The Right Owner For This Dog Is…

Finding an available Shikoku Dog puppy is half the battle as they’re quite rare outside of Japan.

Before committing to the research, think about whether this breed is the right fit for your lifestyle.

For example, if you love physical exercise and don’t live with any cats or small animals, the Shikoku Inu could be a good fit.

But if you don’t get outside much or have allergies, pick a different breed.