15 Things to Consider before You Choose a King Shepherd 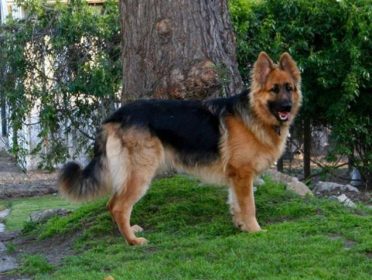 Before you decide whether your life has room to own a King Shepherd, here are some things you should consider.

#1 Where did the King Shepherd Originate?

As his name suggests, the King Shepherd is a king-sized Shepherd hybrid. This large breed was developed by American’s Shelley Watts-Cross and David Turkheimer.

The King Shepherd was initially bred from American and European German Shepherds, Alaskan Malamutes and Great Pyrenees. They started breeding them in the early 1990’s, however, an official breed club was only established in 1995. And the rest as they say, is canine history.

The King Shepherd won an instant appeal for his high intelligence, unfailing loyalty, vigorous effort, and his attractive appearance.

#2 What is the difference between King Shepherds and German Shepherds?

Let’s take a look at the German Shepherd vs. the King Shepherd. 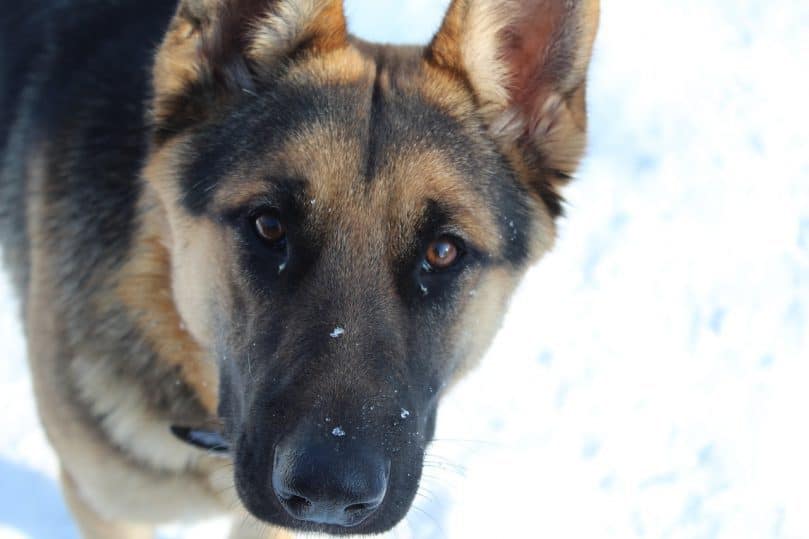 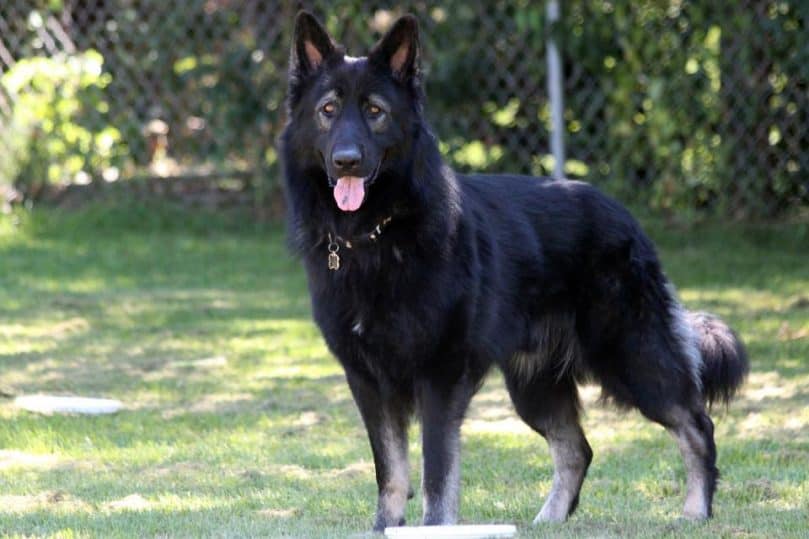 What are their Height and Weight?

What’s the difference in appearance?

As we mentioned before, King Shepherd is larger and it’s also more rugged than the German Shepherd.

If you purchase a King shepherd, you’ll find that they come with one of two different types of coats – the first is a straight coarse coat and the second is a wavy long-haired coat. On the other hand, the German Shepherd’s coat will either be long-haired, double or plush.

Since he’s a hybrid German Shepherd, naturally, King Shepherd resembles his parent. But there are more appealing differences between them. The King Shepherd is more powerful.

Handsome is without a doubt the first word that comes to mind when you look at this beauty of a dog.

German Shepherds could be white, black, tan, grey, or have a sable saddle while King Shepherds can come in white and black colors and might also be a tan color with a hint of brown and black markings or they can be a grayish silver color with some hints of black on their coat.

Even as puppies King Shepherds are identifiable because of their thick ears and teddy-bear faces.

What’s the difference in temperament?

Both seem to have similar temperaments in many respects, however, the German Shepherd can become a bit nippy and bark at you when he’s left alone too long or doesn’t get enough attention or stimulation.

But other than that the German Shepherd is loyal, obedient, alert and watchful. We’ll cover the King Shepherd’s temperament a little later.

What’s the difference in lifespan?

German Shepherds live a little longer topping out at thirteen while King Shepherds’ lifespan is usually 11 at the most.

#3 Meet the Family of Shepherd Dogs

The King Shepherd is one of a large classification known as “shepherd dogs” who are also called sheepdogs too.

Under this broad category, there are several purebred and crossbreed dogs. There are over twenty-five breeds in this category, including:

#4 The King Shepherd is Famous for his Temperament

We’ve just had a look at the German Shepherd temperament, so now let’s take a look at this mighty dog’s personality. King Shepherds will worm their way into your heart with their winning ways.

They are extremely loving and steadfastly loyal, as we mentioned earlier. It’s mild, kind and playful too.

King Shepherds are hard workers which comes from their shepherd instinct. They are eager to please and are quick to grasp what you want them to do.

Do you want your kids to have memorable experiences with a cherished family pet? King Shepherds are playful and exuberant, yet they are still incredibly gentle with kids. They are also loyal and protective of their little buddies.

Do King Shepherds Get Along with Other Dogs?

King Shepherds have a playful, social side around other household pets. They are gentle even though they are large. Cats and other dogs are treated kindly by this giant.

What more could you ask for as a guardian of the family?

Check out the King Shepherd’s temperament on this video

#6 How Much Space do King Shepherds Need?

If you’re looking for a dog to fit into city life or a small home, King Shepherds are not the dog breed for you.

They are without a doubt a ‘lot of dog,’ therefore King Shepherds need space. This is not an apartment or condo-sized pet. King Shepherds tend to fill even modest house space. So having a big backyard or a nearby park is a must.

#7 Keep those Minds and Bodies Busy

King Shepherds are full of energy and incredibly smart, so we already know that they need lots of space for their giant size, but the buck doesn’t stop there – they will hugely benefit from mental stimulation too.

They will keep you on your toes, as they get bored quickly and thrive on a genuine challenge.

If you look forward to coming home after a busy workday and just chilling out, then forget owning a King Shepherd. These dogs love strenuous exercise and movement.

Get ready for long fast walks, jogs or bicycle rides where your King Shepherd can run alongside you. This dog possesses boundless energy.

They will run about, jump up, leave muddy paw prints and knock things off shelves and tables with their tails.

Fair warning: If you don’t set up a schedule of exercise you’ll pay the price. Under-exercised King Shepherds become bored and look for ways to burn off that energy.

If they are not kept busy and exercised, their health and your well-ordered home will suffer the consequences. King Shepherds can even get depressed if they don’t receive a lot of brisk exercises.

#8 How Much Grooming does this Beauty Need?

If you don’t have a lot of time or energy to devote to dog grooming, then the King Shepherd is not a good choice.

King Shepherds demand a fair amount of grooming. Brisk brushing not only improves your King Shepherd’s appearance, it increases blood circulation and makes him healthier.

The bonding that takes place during grooming is an excellent experience for both of you.

The King Shepherd’s coat is very weather resistant. While he needs frequent brushing, you should bathe him only when it’s necessary.

Daily vacuuming of shed and brushed hair and frequent mopping of paw prints is a reality – but worth the effort in my mind.

There are some essential things you should know about feeding your King Shepherd.

A typical serving for your adult dog is three or four cups of dry dog food per day. Divide this into at least two meals.

Check with your veterinarian during regular check-ups to see if your King Shepherd in a good weight. If you’re adding canned food, be sure to reduce the servings of dry dog food.

#10 How Easy is the King Shepherd to Train?

We know by now that this is a super smart canine, but despite this, initial training will require a lot of patience, consistency, and persistence, as is with any other dog.

However, as King Shepherds are so eager to please you, training will be really fun and your new canine companion will get the hang of it pretty quickly.

Once trained, your King Shepherd retains the lessons taught. As long as you also remember and implement what you learned in obedience classes, then you are in for years of loyal companionship.

This is one of the primary reasons dog owners cite for buying a King Shepherd. They are outstanding watchdogs.

He can be counted on to bark if an intruder or a stranger tries to enter your home or accosts you. King Shepherds are courageous and formidable in appearance. And they’re fiercely protective of their people. 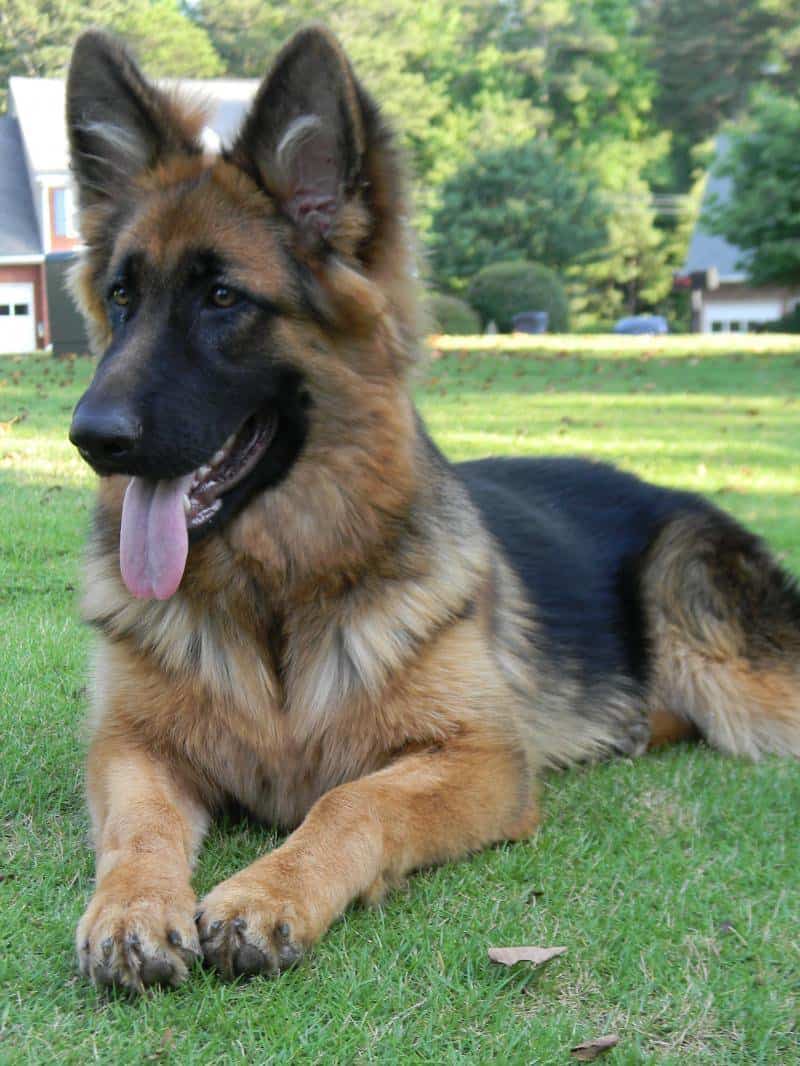 #12 We all have Health issues – even King Shepherds

Like the rest of us, King Shepherds may have some health problems.

Don’t panic. But it pays to be informed. Because your King Shepherd is a crossbreed, they may have health problems associated with both of his parents.

The good news is that hybrids like King Shepherds have what vets call hybrid vigor. This means they can be delightfully hardy and healthy.

However, King Shepherds like other big dogs may be prone to such medical conditions as joint dysplasia, Von Willebrand’s disease, hypothyroidism. They may also inherit allergies and eye diseases, degenerative myelopathy, pancreatic problems and thrombopathia.

In the market for a King Shepherd puppy? It’s is important that you know what to look for.

King Shepherd litters are usually between six and ten King Shepherd puppies. They sell in the USA for between $1500 and $2500. With this kind of investment, you want to make sure you’re dealing with a reputable breeder as they sure don’t come cheap!

Backyard breeders are people with one or two dogs who breed as a sideline. Their dogs may be well treated but not necessarily looked after medically.

On the other hand, puppy mill owners have one thing in mind – making money at all costs.

They breed as many dogs as fast as they can and often under abysmal conditions. Inbreeding is rampant, and puppies often have genetic disorders.

The reputable breeder’s number one priority is the well-being of their animals.

The American Kennel Club has suggestions for puppy shopping

If you’re cash short, you might consider a King Shepherd Rescue.

The country’s pounds and animal shelters bulge with abandoned but otherwise valuable dogs. They need forever homes. Why not check out the All Shepherd Rescue website.

Some of these rescue dogs may have abandonment issues. Some may have health problems due to lack of exercise, improper diet, or lack of medical care.

Don’t be worried about what happened to these dogs before you stepped in and saved them. It’s highly feasible to adopt an adult dog and give him a fresh start. You can turn his life around by offering him a forever home.

If a King Shepherd is your wish, be patient and let local shelters know what you want. 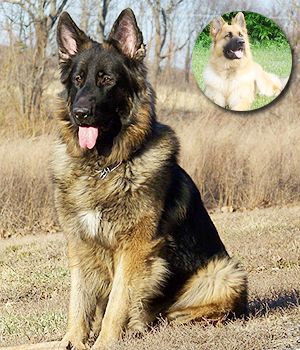 No one promised a King Shepherd price would be cheap. First, a puppy will set you back between $1500 and $2500, as we mentioned earlier – unless you know a kind and generous breeder!

The next cost is making sure your new family member is healthy. You need to do an initial medical exam which is a brilliant investment.

You want to prevent health problems down the road, and you want to ensure your puppy is in excellent health. That’s why the seventy or so dollars you spend on getting the test for your King Shepherd is vital.

Some breeders and most animal shelters do this as part of the adoption process. Don’t assume this, though, instead ask.

If you want to be a responsible pet owner, you’ll also look into spaying or neutering. Check out the situation at your vet’s clinic. Many clinics offer this nearly $200 service for free. If you’re adopting a rescue dog, chances are spaying or neutering has already been done.

If you go the route of King Shepherd adoption, you can expect to pay between $75 and $200.

You’ll also have to buy a dog license costing about $10.

Okay, you’ve got your healthy dog home. Here are some other costs to consider:

Are You and the King Shepherd a Good Match?

Ask yourself these questions:

-Are you looking for a big brave dog who will always protect you and your property?

-Do you have a large backyard?

-Do you have the time to exercise this highly energetic furry friend?

Do you own a King Shepherd? Tell us your thoughts on this noble breed.