6 Facts to Know About the Beautiful White Swiss Shepherd 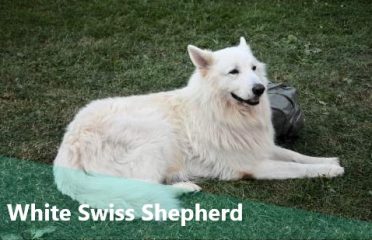 The White Swiss Shepherd is a dog breed that originated from Switzerland and is descended from the White Shepherds imported to Switzerland. Its a medium to large dog at about 22 to 26 inches tall, weighing between 55 to 88 pounds.The lifespan of this breed around 12 years.

Gentle and majestic, this breed is not to be confused with the White German Shepherd. Certain characteristics single her out from the German clan, earning her recognition by the Kennel Club in 2017 as the 219th pedigree dog breed.

What sets the White Swiss Shepherd apart from the rest? In this article, we’ll explore this under-the-radar breed and uncover what makes her a wonderful addition to any family. 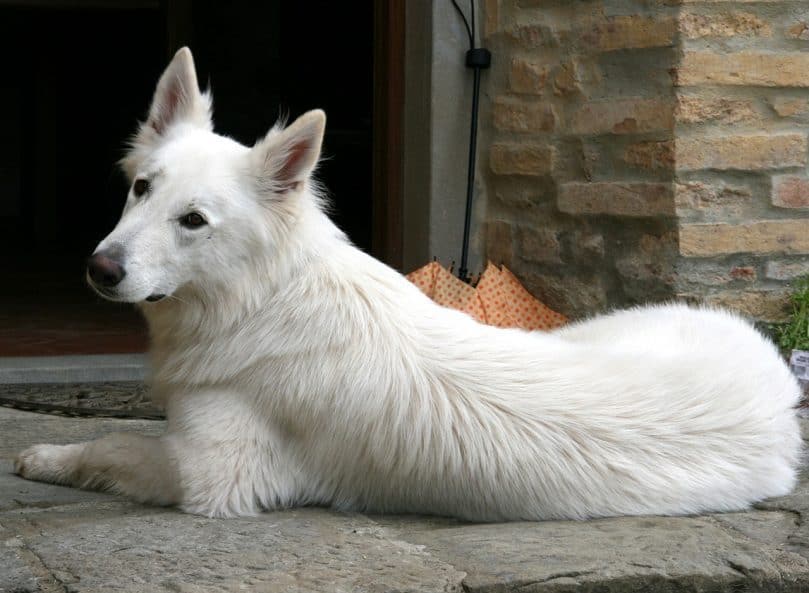 1. This Purebred Has the Same Origins as the German Shepherd

Also known as the Berger Blanc Suisse, this canine made its debut in the late 1800s in Germany.

German captain Von Stephanitz is credited with breeding the first German Shepherd as a herding dog, which later gave rise to other Shepherd breeds, including the Swiss Shepherd.

The White Swiss Shepherd was touted as a separate breed in 1931, as its powerful physique and toned down personality garnered notice from Shepherd enthusiasts throughout Europe.

It didn’t make its debut in the US until the 1970s and has not received breed distinction from the AKC. In fact, it’s still relatively rare to find them in the states compared to the popularity they enjoy in Europe. 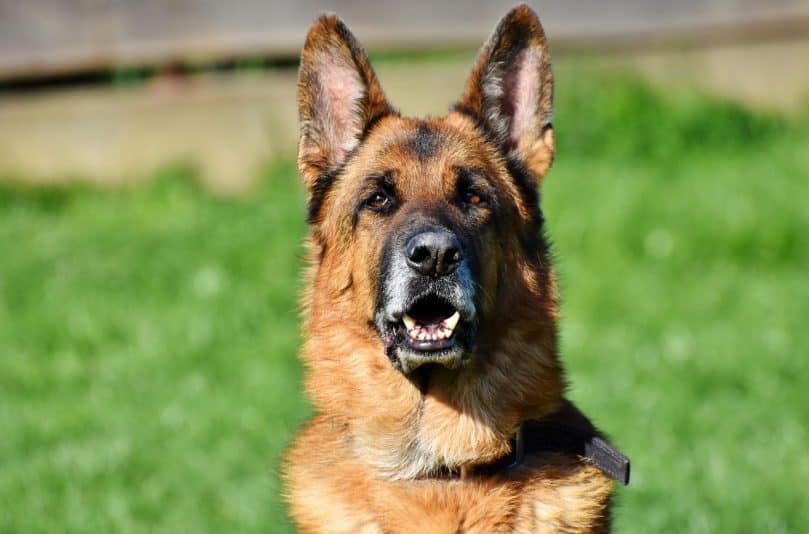 Like the GSD, the Swiss Shepherd is alert, protective and loves to be challenged with plenty of activity. They are also both herding dogs at heart. But, what sets them apart is demeanor, appearance and breed classification.

While the German Shepherd is more outgoing and can be aggressive, the Swiss Shepherd is shy, skittish and gentle. That’s why you won’t see one of these dog’s used for police or military work.

As a family dog, they won’t hesitate to alert the household to a strange car that has pulled into the driveway, but that’s about as far as the guard dog duty goes. Content that her job of barking is done, she’ll curl up on her bed and let you determine how to handle the “intruder”.

The difference in appearance between the two breeds is coat color. While the German Shepherd is typically tan and black, all white or all black, the Swiss Shepherd is only white.

Classification distinguishes these breeds as well. The Swiss Shepherd is recognized only by the FCI. The German Shepherd, whether white, black or traditionally colored, is recognized by the UKC and AKC.

2. She is a Vision in White 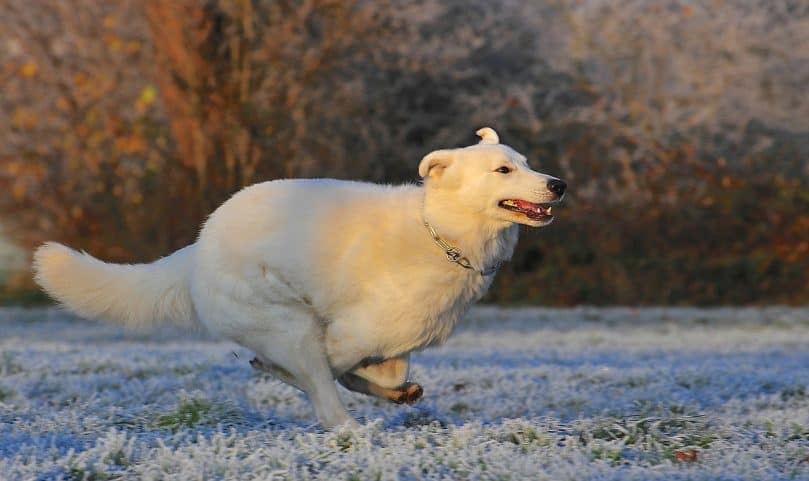 This breed only comes in white or cream, with thick fur well-suited for the cold (note: does not handle heat well).

The Swiss Shepherd has a graceful stance with low-lying hips tapering up to an erect head and pointed ears that resemble that of a regal arctic wolf. As we mentioned above it reaches a height of 22-26 inches (55-65 cm) and ranges in weight from 55-88 lbs. (24-40 kg).

The average lifespan of the White Swiss Shepherd is around 12 years.

3. This Dog is the Mellow Cousin of the Shepherd Family

If you want a breed that has the appearance of a GSD but is less aggressive and serious, then go for the Swiss Shepherd.

This dog is more timid and clingy towards the owner, which can be good and bad. While she does well around children, if left alone for too long, separation anxiety will start to set in. This leads to destructive behavior, whether it’s chewing belongings or digging up the garden.

Still, the Berger Blanc Suisse is well-known for her high intelligence. While not preferred for police work, she does make an excellent service dog and performs well in various dog competitions.

With a herding background, be careful when introducing her to other dogs in the family. She may try to act dominant towards them, as this breed prefers human company to other canines.

The Berger Blanc Suisse is high energy, so plenty of space is needed to move around easily and explore. That’s why a fenced in yard is most ideal- not a tiny apartment in the city.

Exercise is key for keeping this dog in tip-top shape. Opt for long runs, vigorous walks or playing outside with interactive toys.

This breed has a health profile that requires careful attention. They are prone to some serious health issues, which makes it essential to check the medical history of the dog’s parents and get a regular checkup at the vet to stay on top of things.

These are the main health issues to be aware of:

The Swiss Shepherd Accepts Any Challenge

This is one of those intelligent breed’s that needs training– craves it even! They love to be challenged, whether it’s by learning new commands or perfecting agility on an obstacle course.

Mainly though, socialization is key to helping a Swiss Shepherd build confidence while curbing skittish behavior and the inclination towards herding.

Since she is known to be on the sensitive side, it’s important to use positive, encouraging reinforcement. A harsh, corrective approach will stress her out.

Check out this video of a Berger Blanc Swiss obeying commands like a champ during a dog competition.

5. Get Ready For All That White Fur

We mentioned that this breed has a white coat evolved to withstand the harsh winters of Switzerland. Sure, it’s a beautiful sight to behold, but that beauty comes at a price.

Heavy shedding can be expected with the Berger Blanc Suisse, and we’re not talking just twice a year during big seasonal changes. This is a year-round shedder, so you’ll have to invest in a heavy duty vacuum and brush.

If you are plagued by allergies or don’t have time to brush your Swiss Shepherd twice a week, this may not be the dog for you. 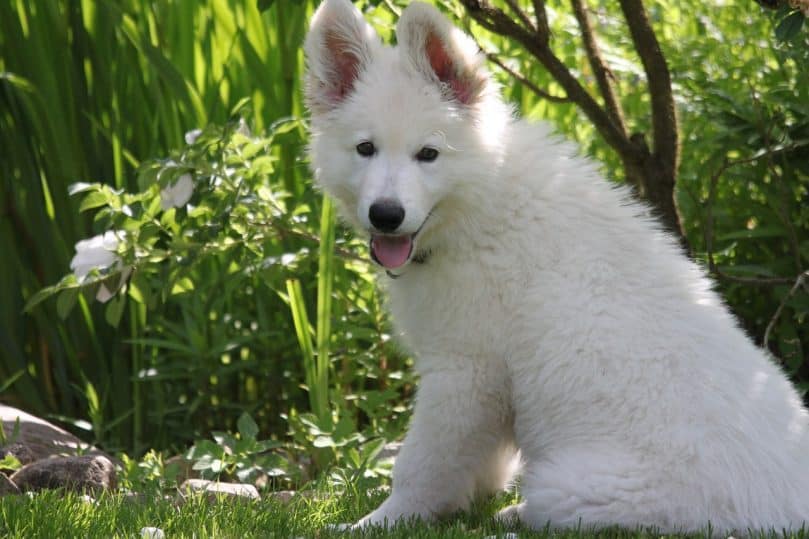 Since the White Swiss Shepherd is prone to a few serious health issues, you will want to be extra picky when shopping around. Hip dysplasia is common, and this is a genetic disease, which can be traced back to the parents.

Come prepared with medical questions about the puppies parents. The breeder should be open to any type of discussion to put all worries to rest. After all, this is a precious life we are talking about!

The breeder should be able to produce health clearances from the vet as well. This is the best way to avoid buying a puppy prone to hip dysplasia.

You’ll want to set up an appointment to meet the breeder at their establishment. This gives you a chance to meet the parents, see the conditions where dogs are bred and how the puppies are raised in their first weeks of life. This will also rule out any sketchy dealings with puppy mills. An ethical breeder will agree to a visit without any qualms.

If you want to buy a well-bred puppy that has been registered with the Kennel Club, be prepared to be put on a waiting list. Few White Swiss Shepherd puppies are bred and registered each year, so get in contact as soon as possible.

Here are some quality US breeders that specialize in the Berger Blanc Suisse.

Conclusion: Is the Swiss White Shepherd the Dog for You? 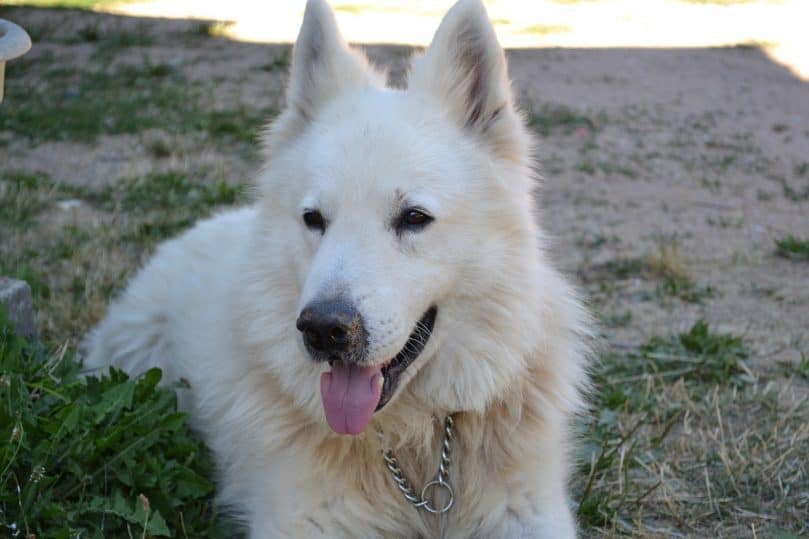 Beauty and brains aren’t all that you’ll get with the Berger Blanc Suisse. She would rather be gentle than act as a protective guard, making her a lovely family dog, especially around children.

If you are looking for a show dog that will impress, this breed shines in competition. It’s also a relatively new and rare breed in the US, so be prepared to turn heads when taking your fluffy friend out in public.

That gentle side is flanked by shyness, which leads to skittish behavior and separation anxiety. But, this can be worked improved with early socialization and training.

Remember, this breed is high energy, so if you’re interested in taking the leap with a puppy, be prepared to set aside time for daily exercise to keep her physically fit and mentally content.

What do you think about the White Swiss Shepherd? Tell us in the comments!