Home » Dog Health » Leishmaniasis in Dogs - What you can do?

Leishmaniasis in Dogs – What you can do? 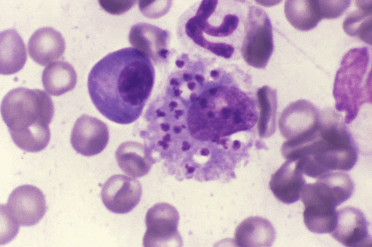 Leishmaniasis is a disease that affects dogs and causes bald patches, sores on the skin, organ failure such as heart attacks, inflammation, and swelling. Leishmaniasis is caused by a protozoan parasite that is found in dogs and some rodents. The parasite is transmitted by a bite of an infected sandfly, or blood transfusions.

I gather some information and compiled a detailed article on this disease, learn more about it below.

What is Leishmaniasis in dogs?

Pronounced “leash man eye a sis” and also known as CanL, Canine Leishmaniasis is a medical term for the disease that comes from a sandfly that is infected with Leishmania infantum (L infantum).

Female phlebotomine sandflies transfer protozoan parasites by biting the skin of the host. 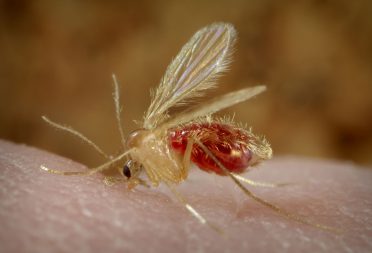 Although Leishmaniasis thrives in warm, tropical climates, it’s a concern in both endemic and non-endemic countries.

It’s prevalent in Africa, Asia, Southern Europe, as well as South and Central America. Affected canines in the US are often found to get the disease in another country such as Spain, Portugal, Greece, Brazil, and more.

Even dog shows can be a source of unknown illnesses that we haven’t heard of around here. As more competitors from foreign countries join and breeding canines and champions are imported, you can never be too careful.

The Cause: Transmission of Leishmaniasis in dogs

Leishmaniasis is a zoonotic infection that is contagious and can be fatal. It can be transmitted to other animals and humans, but dogs are the main reservoir host and there’s no breed, gender, or age predilection.

The diphasic parasite completes its life cycle in two hosts:

Canine Leishmaniasis’ transmission to dogs is a complex process.

Congenital vertical transmission is possible, where an infected mother dog would pass the disease to its offspring, but it’s rare. Others get Leishmaniasis through blood transfusion, as well as dog-to-dog transmission.

Direct transmission is seen as an explanation with regards to infected kenneled Foxhounds in the USA.

A dog can contract parasitic diseases through ingestion or sniffing of soil, feces, food, as well as infected water. So be very careful where your pet goes where he points his sniffer whenever visiting a tropical travel destination.

Before we continue and for you to have an idea of what a dog with Leishmaniasis goes through, watch Moon’s journey:

Forms and symptoms of Canine Leishmaniasis

It’s important to note that the transmission of Leishmaniasis in dogs can come from both symptomatic and asymptomatic canines.

The incubation period for Leishmaniasis can range from a month to years. It’s possible for some dogs to have the parasite on them for long periods of time before any clinical signs or symptoms show up (asymptomatic).

The disease will lay dormant until an illness or stress triggers it.

Generally, the incubation period in humans is around 2 to 6 months. In dogs, it can take as early as three weeks to seven years. 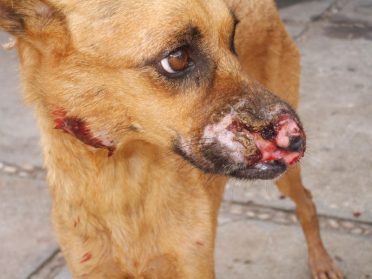 If your pet is a healthy pooch, then it’s likely that you won’t notice any early symptoms. But once he gets sick, his immune system may continuously fail. What will happen is the parasite will multiply and attack its host which will lead to Cutaneous or Visceral Leishmaniasis. These two types affect the different parts of a dog’s body.

Cutaneous Leishmaniasis (CL) is an infection of the skin, while Visceral (VL) affects the organs of a dog’s abdominal cavity and is the most severe form of Leishmaniasis. Visceral Leishmaniasis is also known as black fever.

Here’s a table showing the different clinical symptoms under each form of Leishmaniasis.

Aside from those, here are other symptoms related to Canine Leishmaniasis:

Renal Failure has signs of excessive urination, extreme thirst, and vomiting. With a serious infection, your pet’s overall health has already declined and the prognosis wouldn’t look very good.

Once you notice any signs and you feel that your dog is a carrier of Leishmaniasis, take him to the vet right away for a possible chance that he’ll recover.

How to diagnose Leishmaniasis in dogs?

The first thing a veterinarian would ask is your dog’s medical history, and that includes any background about travels. Any possible information that could have led to your pet’s current condition is important.

A physical exam and a complete blood test will also be performed. It will help the vet rule out evidence of diseases like cancer or lupus, among other illnesses with the same symptoms.

Aside from those and a urinalysis, smears or biopsies and tissue samples will be taken from the skin, lymph nodes, spleen, and bone marrow for laboratory culturing and fluid aspirates. These general examinations are effective in diagnosing Leishmaniasis if there are organs that are affected.

Canine Leishmaniasis can also be diagnosed with a test called ELISA (enzyme-linked immunosorbent assay). It’s a test to measure the levels of antibodies. If it’s high, then infection or CanL is present.

Last but not least, is the polymerase chain reaction or PCR test. It’s the most effective way for specialists to diagnose Leishmaniasis as they can directly see your dog’s DNA and any changes happening within him. 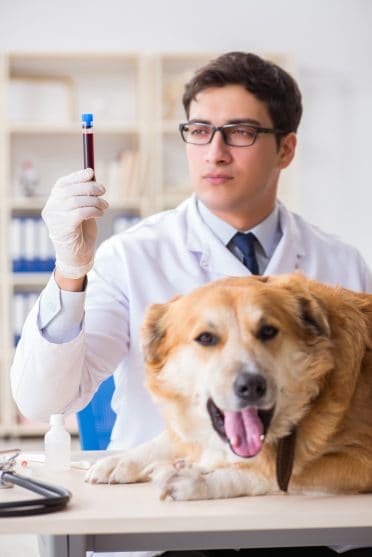 An existing parasitic infection altering the DNA of its host through its cells and tissues will let veterinarians see what exact disease is in the animal.

In the US, any canine diagnosed with CanL should be reported to the CDC (Centers for Disease Control and Prevention by vets or animal specialists. For those in Canada, Leishmaniasis has no reported occurrence and it’s listed as a “non-reportable list B” disease as per the CFIA (Canadian Food Inspection Agency).

Treatment: Can Leishmaniasis be cured in dogs?

Yes, and there are different ways of treating Canine Leishmaniasis depending on its severity.

If your dog is not extremely infected, the veterinarian will prescribe a high-quality diet where mostly are designed for renal insufficiency.

Since this is a zoonotic infection, the parasites in the lesions may transfer to humans. Those organisms will never be completely eliminated. Relapse and treatment are inevitable.

The good news is, there are medications to address the symptoms and the disease itself. Again, depending on how severe your dog’s condition is, the vet can give the best course of treatment.

A special drug from the CDC is available for treating Leishmaniasis in dogs called sodium stibogluconate.

Allopurinol and meglumine antimonite are an alternative in treating this disease. They’re strong, anti-parasite medication. They’re taken daily for 28 days, then continuing with just allopurinol from up to 6 or 12 months.

Miltefosine (Milteforan) or amphotericin B are other drugs that can be combined with allopurinol and taken for the same time frame as above. The amount of medication given would also depend on how the Leishmaniasis is progressing in your pet. 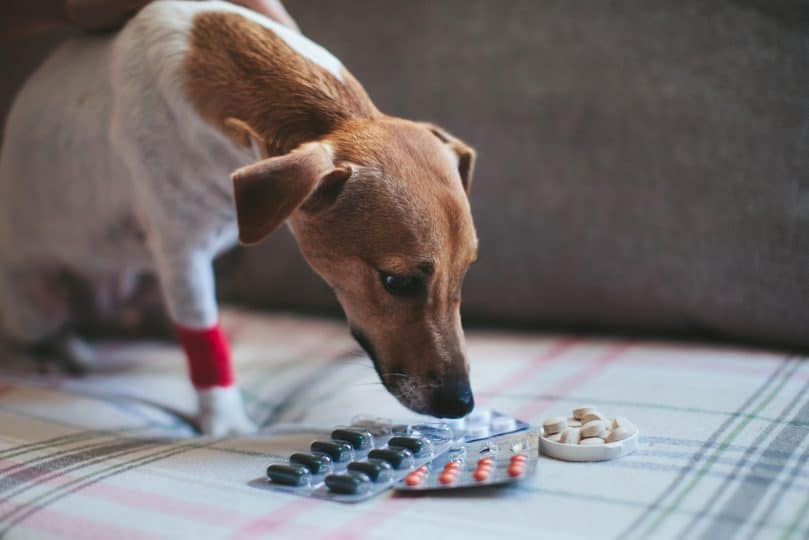 To support the treatment, your dog will be put on intravenous fluid support and a special diet.

If skin lesions are infected, they’d either be removed surgically or the canine has to take antibiotics as well.

Sadly, if an animal is chronically infected and emaciated from Leishmaniasis, the prognosis is very poor and euthanasia has to be considered as a solution.

You might have heard of natural treatments for leishmaniasis in dogs, but be cautious. Avoid further risks by consulting with a veterinarian or animal doctor first. This disease is dangerous as it is, and even if your intentions are good – to help your pet get better – it may cause more harm.

Living with and caring for a dog with Leishmaniasis

With a lot of medications involved, you would have to give your time and effort in monitoring your dog throughout the treatment. 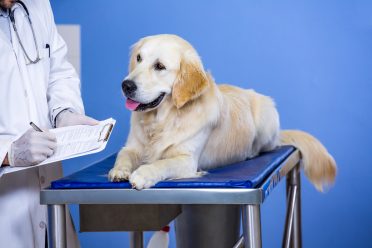 The veterinarian will want to observe your pet to continue identifying organisms in repeat biopsies and check for any improvement. After the initial therapy, expect a relapse within a few months to a year.

You have to bring your dog for a check-up every 2 months after the initial treatment is completed.

If your pet is diagnosed with Leishmaniasis, the prognosis is very guarded to grave.

Some are too ill that they die from organ failure, while others won’t even be able to undergo any treatment.

Prevention and control of Canine Leishmaniasis

According to the CDC, there is no way for preventing your pet from getting infected with Leishmaniasis. As always, prevention is better than cure.

As much as possible, do not allow your fur baby from getting in contact with either a dog or a spot that seems questionable. If you suspect that another animal might be sick, keep him away from it.

You should also avoid traveling to locations anywhere in the world that has a record of Leishmaniasis. 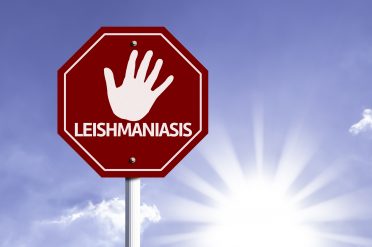 In the UK, you may find a vaccine. It won’t prevent your dog from contracting the disease, but it can help reduce the risk of clinical signs from developing.

Other owners use all sorts of prevention such as insect repellents and keeping their pets indoors if they have to go to a place where Leishmaniasis is active. Culling is a recommended control strategy for infected dogs in some endemic areas.

These parasites are more frequent during the rainy season and the risk of transmission is highest from dusk to dawn.

Share your story or treatment methods with us and our fellow pet owners by commenting on the box below!