The American Alsatian: The Ultimate Guide To The Breed 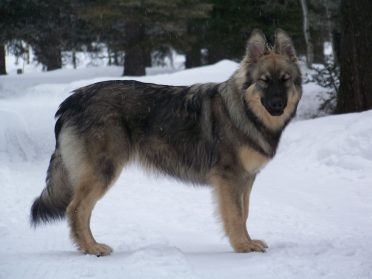 There tends to be a lot of confusion around this dog, so, first of all, I’m going to clear up some common questions about where the breed comes from, what it was bred for, and what it’s called. Then we’ll move on to find out more about having the American Alsatian as a pet.

What is the Dire Wolf Project?

Let’s start here because this is really where the American Alsatian was born.

At the time, wolf-dog hybrids were popular, but Lois knew them to be difficult pets.

So, Lois’s idea was to breed domesticated dogs that resembled the large prehistoric Dire Wolf but which had a calm, companionable character.

Let’s be clear about something – Dire Wolves no longer exist. They went extinct a long time ago. And the Dire Wolf Project’s aim is not to revive it, but to produce a dog that looks like it.

So, Lois knew she would need two large breeds of dog to attain this “wolf” look.

It is worth mentioning here that, throughout 20 years of selective breeding, Lois’s main concern was to achieve the character she wanted – that of a laid-back, “companion dog.”

She did not start to think about looks until she had the personality, intelligence, and trainability on track. It wasn’t until the year 2000 that the dogs finally met the breed standards set by her in 1987, and the public got its first glimpse of this glorious breed.

This is where the American Alsatian comes in…

What is an American Alsatian?

So, we know that in 1987, Schwarz had the idea of breeding a dog with the appearance of a wolf and the temperament of a companion dog.

Well, her idea became a reality – the American Alsatian was born.

The first American Alsatians were whelped in 1988 by Schwarz. They were bred from a purebred Alaskan Malamute and German Shepherd.

Other dogs were later introduced into the breeding of this dog, including:

As well as for their physical characteristics, Schwarz also used the above breeds for certain personality traits they displayed, including intuitiveness, intelligence, and friendliness.

In each generation of breeding, Schwarz continuously tested the health, temperament, and strength of the puppies, handpicking the ones with the best results to continue the line.

What’s the difference between an American Alsatian and an Alsatian Shepalute?

You may have heard of the Alsatian Shepalute dog. So, what’s the difference between this dog and the American Alsatian? Well, the only difference is the name… Confusing? Let me explain.

Originally, in 1988, Denny-Schwarz named her breed the North American Shepalute. This latter word “Shepalute” is a mix of the words Shepherd and Malamute, the two original dogs she bred.

In 2004, the name of the breed was changed again to Alsatian Shepalute, as it was agreed that the term Alsatian had connotations of a wolf-like appearance.

It wasn’t until 2010 that the term Shepalute was removed completely and the breed was named the American Alsatian, as we know it today.

The idea of dropping the original name was because it sounded too much like a crossbreed. In fact, this breed was developed as a purebred dog and now has its own breed standard. 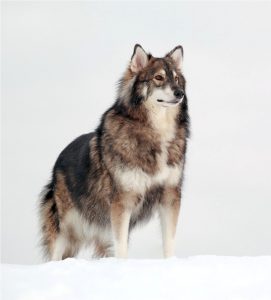 Of course, we know the aim was for this dog to look like a Dire Wolf. But let’s look at the physical specifications of this breed to get a good idea of what that means.

So, this is what the breed standard says:

Males should measure a minimum of 26 inches and can reach up to 32 inches (cm); they should weigh at least 90 lbs (kg).

American Alsatians should have:

As for their coat, American Alsatian colors vary, including:

5 Things To Know Before Getting An American Alsatian 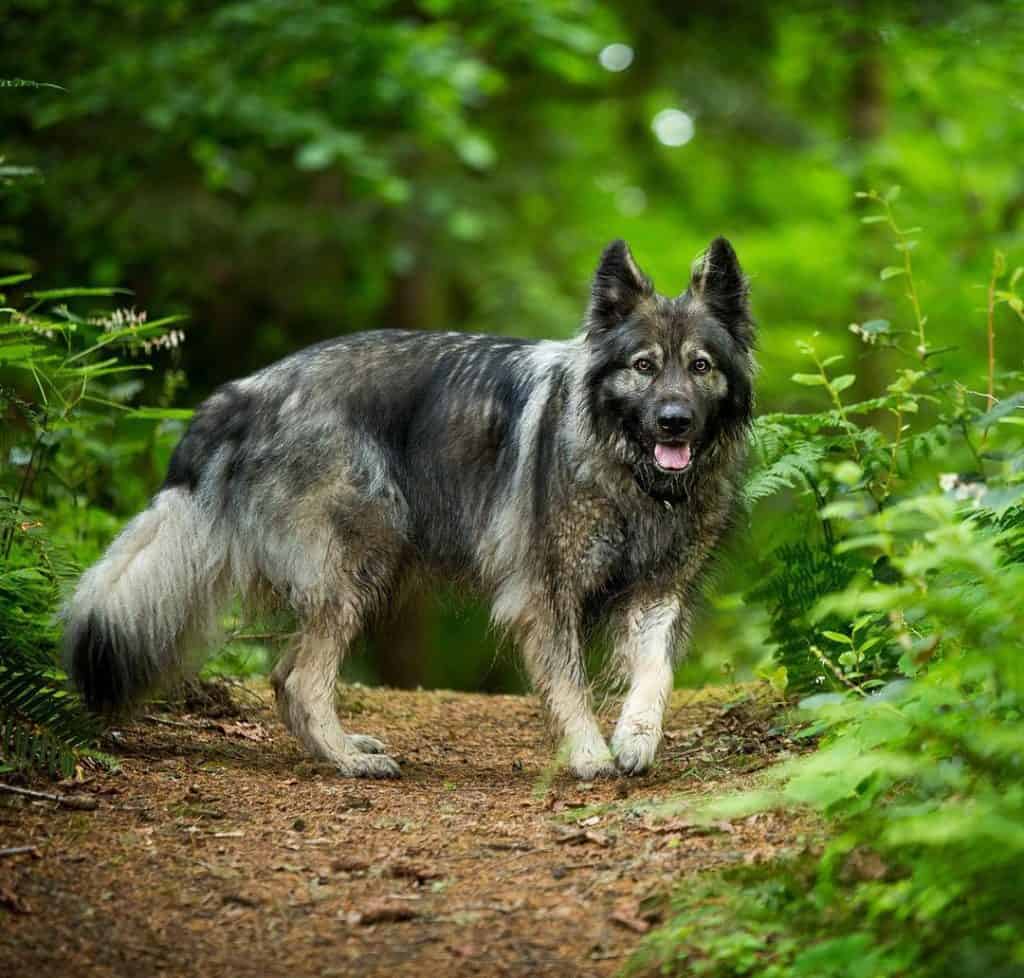 So, now that we know a bit about the history of these dogs and what they look like, let’s see what it’s like owning an American Alsatian as a pet.

I’ve chosen 5 main things I think is important to know about this breed:

This one comes in at number 1, as, perhaps unsurprisingly, American Alsatians are classed as a giant breed.

While these dogs tend to have a calm temperament with low energy levels for a dog their size, simply due to how large they are, I do not recommend getting this dog if you live in an apartment.

They should live in a house with ample space to move around in, ideally with a yard. These dogs make very calm house pets.

2. This dog will be your devoted companion 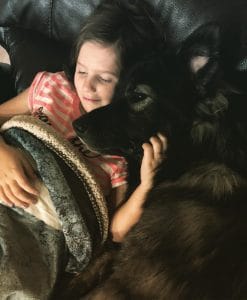 Above all, Schwarz strived to create the ultimate companion dog. This was her main focus over 30 years of breeding the American Alsatian, and, boy, is this evident today.

So, while this dog will need space, prepare to share yours! American Alsatians are incredibly people-oriented and, for this reason, they are often known as “lap dogs.” So, get ready for cuddles in the evenings!

As American Alsatians form such strong attachments with their loved ones, they don’t like being left alone for too long. I don’t recommend leaving her for more than 4 hours at a time. For this reason, they best suit a family where at least one member is at home for a large part of the day.

A real plus of this strong attachment is that these dogs will rarely wander or run away from you or their homes.

American Alsatians make great pets for families with children, as they are usually very gentle with young ones, though not the most playful of dogs.

Many people think that if it’s a large dog, it’s going to have a big character to match. Right?

Just as some small dogs are high-energy, many larger dogs are actually quite low-energy.

Another of Schwarz’s primary focuses apart from companionship when breeding this dog was to breed a dog with a calm, quiet personality.

While American Alsatians are low-medium energy, they do, of course, need exercise (at least an hour a day). They like to go on long walks, but they are not the right dog to take on difficult hikes. Other dogs such as the Siberian Husky, who have a stronger drive, are better suited to owners who want an extreme exercise partner.

Another aspect of this dog’s personality is that they are very quiet; they rarely bark or whine.

This could be welcome to a lot of people’s ears, but for those who want an alert dog, you should definitely look into other breeds, because this one isn’t going to be the right fit!

4. Here’s the deal with her coat

Remember that coarse, dense outer coat the American Alsatian has?

The good news: it repels dirt and detritus, and it’s usually odor-free.

The bad news: it sheds very heavily once a year around May or June when she will practically leave a trail of hair behind her everywhere she goes. That means on the carpet, on the sofa (if you let her up), on furniture and on clothing… You get the idea.

So, at this time of year, you will certainly need to have the vacuum cleaner to hand!

You will also need to brush her once every other day to help the process along and dispel as much hair as possible. 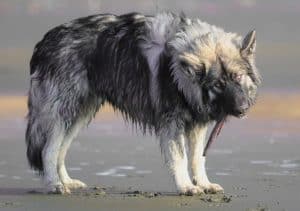 This heavy shedding process takes about a month, where the entire undercoat is shed, leaving just the top coat. So don’t panic if your dog suddenly starts looking much thinner – it’s just that this undercoat is so thick, you will start to realize just how much that winter coat adds to her size!

Apart from this intense shedding period, American Alsatians are pretty much shed-free. You should still brush her coat once or twice a week to keep it healthy, though.

5. She may be prone to some health problems

Every dog breed is prone to certain health issues. But since this particular dog is a relatively new breed, it’s not easy to say yet what health problems she is more likely to suffer from.

What we can say is what major health problems have been noted in American Alsatians so far, even if in just one dog.

On the whole, American Alsatians are healthy dogs, though, which is likely due to the amount of outcrossing that happens within the breed. As mentioned above they have a lifespan from 9 – 13 years.

Where can you get American Alsatian puppies?

So, have you fallen in love with the idea of this dog joining your family unit? Think you’re up to it?

It is important to make sure whoever you get your pup from is responsible and knowledgeable about the breed. That way, you know you’re getting a pup that is a true American Alsatian in good health.

So let me point you in the direction of these responsible breeders. Here they are:

Here you’ll be going directly to where these dogs originated – to Oregon-based Schwarz Kennels, run by Louis Schwarz, the breed founder herself.

On the puppies for sale page, you can see which dogs she currently has available and their prices.

To show your interest, you will have to fill out a puppy interest application form giving details about yourself and your experience with dogs.

Based in Colorado, this breeder adheres strictly to the original breed guidelines and produces healthy puppies with good temperaments. They are very particular about who their puppies go home with.

You will have to fill out a puppy adoption questionnaire, after which, if you are approved, you will be interviewed.

Here you can see the dogs they are currently breeding to get an idea of the litters of American Alsatians that will be coming soon.

Both of these breeders usually have a waiting list, so bear in mind that you probably won’t be getting a puppy just yet.

So, what do we know about the American Alsatian?

Does this sound like the dog for you? Do you own one of these dogs or are you thinking of getting one?