A Beginners Guide to the Czechoslovakian Wolfdog 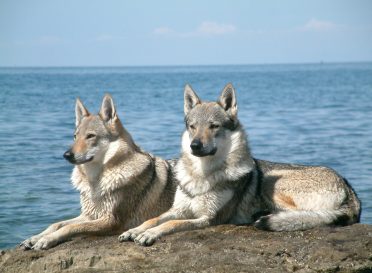 An ideal owner for a pup like this is someone who’s incredibly active and has plenty of dog handling experience. If that sounds like you, keep reading for more info about this fascinating breed!

Czechoslovakian Wolfdog Origin: Where Do They Come From?

The Czechoslovakian Wolfdog (unsurprisingly) originates from Czechoslovakia. They were bred to help with border patrol in the 50’s and were primarily used by the military in attacks. For this reason, they’re incredibly versatile and can cope with harsh conditions.

Nowadays, they’re sparsely used throughout the U.S. and Europe as rescue dogs, and for their tracking, and herding abilities. 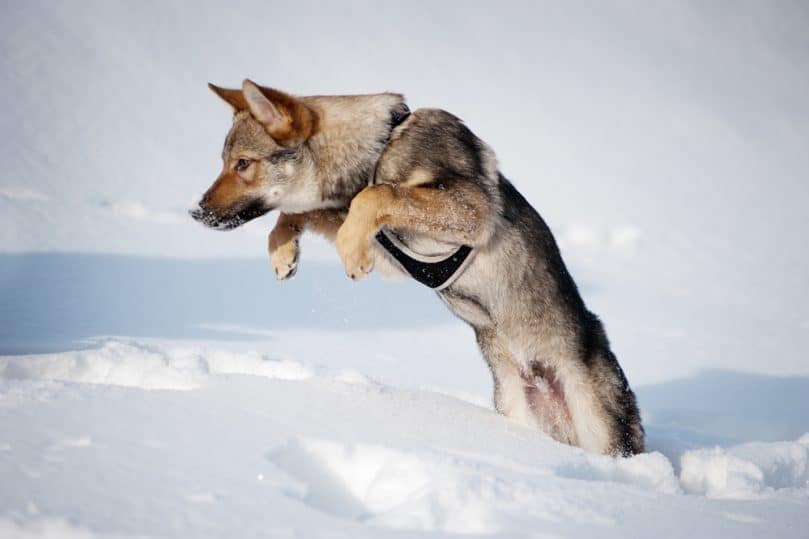 Typically, Czechoslovakian Wolfdogs look far more like wolves than they do German Shepherds. They’re incredibly rugged and boast a beautiful gray coat, with short, thick fur. Occasionally their coats are described as yellow-grey or silver-grey.

Their body looks ever so powerful, and they sport long feet and a stiff back. Their teeth are astonishingly forceful, making their bite razor sharp. Trust us; you don’t want to get on the wrong side of them!

Usually, their chests are prominent, and their stomachs are strong and drawn in towards their body.

To put it into perspective, you’re looking at a dog that’s at least the size of a German Shepherd, (which given its lineage isn’t surprising). If you don’t think you can handle a dog that size, this isn’t the pet for you.

What Do They Eat?

A raw diet is preferable; however, you can supplement this with a grain-free kibble formulated for large-sized breeds. This is important because grains sometimes trigger allergies in dogs. Instead, carbohydrates should come from: potatoes, sweet potatoes, or yucca, etc.

Despite their large size they still need a well-balanced diet full of nutrients and protein. One of the best dog foods for German Shepherd’s relatives this is: ‘Taste of the Wild’. It’s packed with plenty of top-quality protein sources (32% to be precise). This makes it an excellent source for active dogs.

They have a weather resistant coat, which means mud and other filth doesn’t readily stick to them. This goes a long way to keep them clean. Luckily for you, they don’t need regular baths or suffer from body odor.

However, they shed twice per year, and during these times they’ll need more frequent brushing to avoid mats forming.

Wolfdogs boast a thick winter coat; which is more substantial than their summer fur. Unfortunately, this needs more regular combing to maintain.

In addition to their fur, you’ll also need to look after their nails. They’re incredibly sharp, and grow quickly, so be sure to keep an eye on them and trim when necessary.

Top Tip: You should try to get into the habit of checking their ears for wax buildup and other debris. This can cause ear infections if left undealt with.

How Much Exercise Do They Need?

Czechoslovakian Wolfdogs have a crazy amount of energy, especially as puppies. They need long walks, every day (a brief run in the backyard isn’t enough). If you don’t have the time to dedicate to extensive walks, they’re probably not the right canine companion for you.

You should ensure they get at least 45 minutes of physical activity every day; this is essential for their health and fitness.

Additionally, regular exercise will stop your pooch from getting bored. You’ll know if he’s restless because he’ll begin to pace back and forth in your home. If you leave these pups to their own devices for too long, they’ll entertain themselves with destructive behaviors like chewing your favorite shoes, and destroying your beloved sofas- not cool!

In light of this, you need to offer the Czechoslovakian Wolfdog enough mental stimulation to stop this from happening. Activities like swimming, hiking, and fetch are all excellent ideas.

Top Tip: their hunting instincts can kick in at any time (even towards smaller dogs), so always keep them on a lead when you’re walking in public areas, you don’t want any nasty accidents to occur!

How to Train Czechoslovakian Wolfdog: Our Best Advice

As we’ve previously alluded to, Wolfdog puppies are a primitive breed of dog. Unfortunately, they sport both a dominant and independent personality. This can make them tricky to train.

If you want a Czechoslovakian Wolfdog, you’ll need a ton of patience and perseverance. You have to offer them different kinds of activities because they don’t respond well to repetitive tasks (even during training).

Their wolf side has to learn how to cope in a domestic environment, which is why it’s important to start teaching them as soon as possible.

More concerningly, Czechoslovakian Wolfdogs are renown for aggressiveness and tend to attack both animals and humans which makes socialization crucial, especially while the pup’s very young.

On the whole, they’re very healthy and robust dogs. However, you should be aware of the following ailments prone in the parent breeds which may become an issue for the Czechoslovakian Wolfdog:

Hip Dysplasia: this is a common skeletal disorder suffered by dogs.

It refers to the malformation of the hip joint, instead of a tight fit between the socket and the ball of the hip, there’s a laxity. If it looks like your pooch is struggling to walk, or is regularly flicking its leg out, we suggest taking him to the vets as he could be suffering from hip dysplasia. Early intervention will help you manage their pain and prevent significant deterioration.

Elbow Dysplasia: this condition involves several abnormalities of the elbow and is a typical cause of lameness in dogs.

Degenerative Myelopathy: sadly, this condition refers to the slow non-inflammatory degeneration of the white matter in your dog’s spinal cord.

Dogs who are affected are usually at least five years old. Symptoms typically include a pain-free weakness in the back legs. This may cause them to look unsteady on their feet. 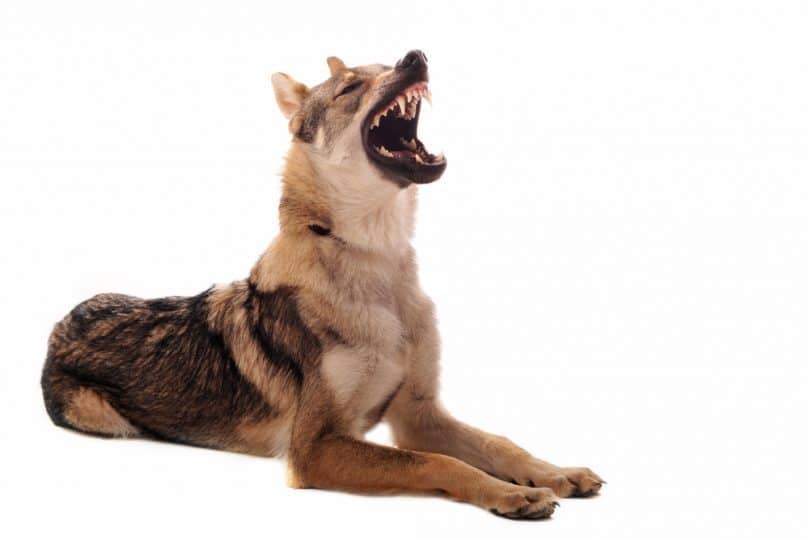 2 Things You Should Know About Czechoslovakian Wolfdog Temperament

There are two things you should know about this breed before you commit to buying one.

This breed is excellent if you want a working dog. They’re fantastic at tracking down scents, which makes them useful on a farm, in the police, or as military dogs.

They’re also fabulous exercise buddies, they love running and being outdoors- so take them with you on your next jog and get fit together!

#2 They’re Known for Their Aggression

Like we’ve already said, Czechoslovakian Wolfdogs have wild DNA in their blood; this makes them both unpredictable and potentially dangerous. They have a sharp instinct for hunting prey which means you need to consider your living situation before buying one very carefully.

Although this dog is relatively rare in the States, they account for a whopping 14 deaths between 1979 and 1998. What’s more, the exact figure is believed to be much higher than this. Owners often mislabel Wolfdogs because of the issues concerning their legality. More generally, wolf hybrids rank as the ninth most dangerous breed of dog in the states.

It isn’t appropriate to force a Czechoslovakian Wolfdog to live with either a child or another pet. Unfortunately, the stats speak for themselves; it could all end in tears.

If you’re wondering how this breed compares with other wolf hybrids such as the Saarloos Wolfhound, here are a few similarities and differences. 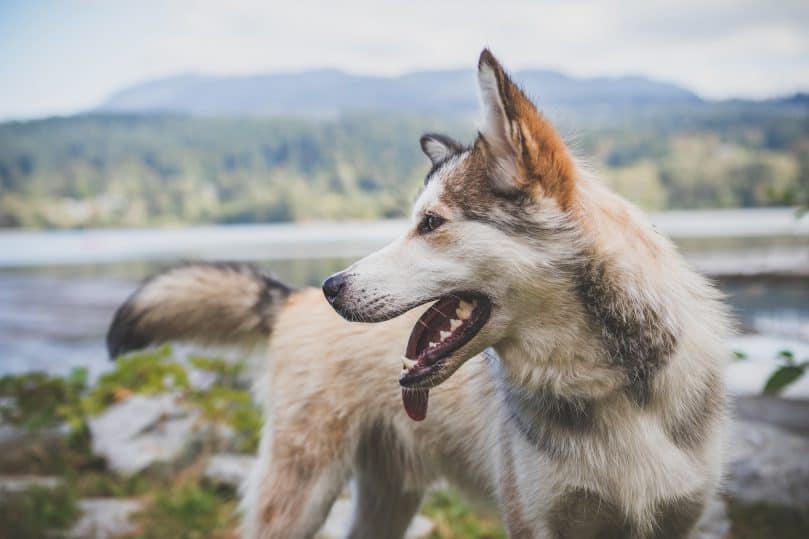 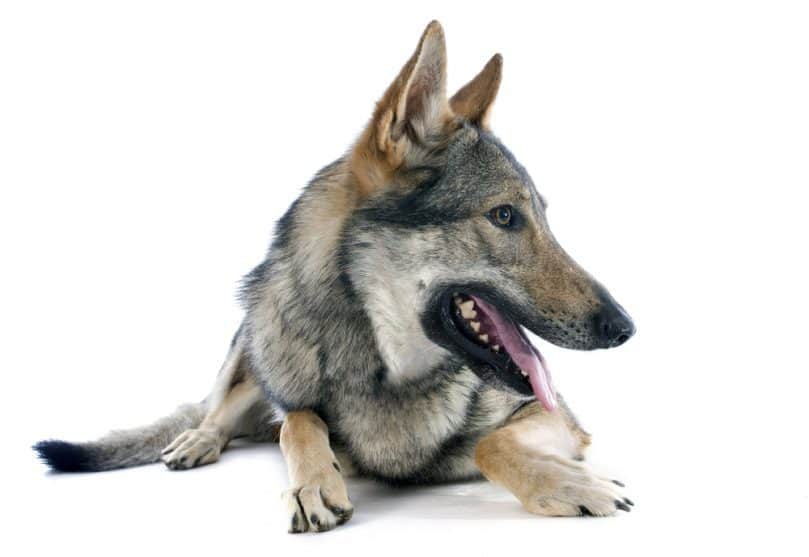 Here’s a quick comparison of the Wolfdog against its parent, the German Shepherd:

How to Get a Czechoslovakian Wolfdog

There’s a shortage of Czechoslovakian Wolfdog breeders, which makes pups hard to come by. Often, you’ll have to register your interest with a reputable breeder before the puppies are even conceived!

Here are the names of a couple of breeders to kickstart your search:

Due to their rarity, you should be prepared to travel a fair distance to go and see the pups and their parents, interview with the breeders, and pick them up. That might involve a lot of driving and a few overnight stays, so be sure to factor this into your plans when working out your budget.

We thought we’d round off this blog post with a couple of interesting facts about this interesting dog breed:

All in all, if you long for a larger sized dog, with a wild streak, and you don’t mind traveling a long way to find a reputable breeder, a Czechoslovakian Wolfdog might be the perfect addition to your household!

Thanks for sticking with us. Please feel free to let us know in the comment box below if you’re thinking about getting a Czechoslovakian Wolfdog, or already have one; we love hearing from our readers!

Here are few more Wolf Hybrids and dogs that look like wolves for further readings:

1 reply on “A Beginners Guide to the Czechoslovakian Wolfdog”