Home » Breeds » What To Expect From The Unexpected Chihuahua Terrier Mix

What To Expect From The Unexpected Chihuahua Terrier Mix 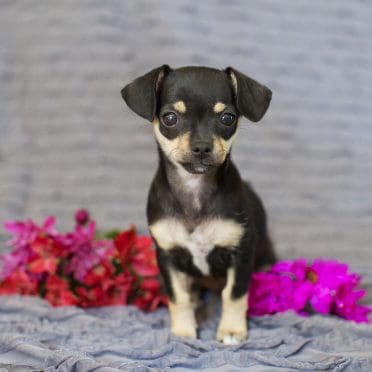 The Chihuahua Terrier Mix is a cross of a Terrier breed and a Chihuahua, also known as Jack Chi or Jack Russell Chihuahua Mix. It’s a small dog breed at about 10 to 25 inches tall, weighing between 6 to 25 pounds. This crossbreed’s average lifespan is around 12 to 15 years.

This breed comes in many shapes, sizes, and sub-breed categories that fit every lifestyle.

Whether it’s for hunting or everyday companionship, the Chihuahua Terrier Mix has a big reputation to uphold — with an even bigger family line.

Can you handle the many surprises that come with a Chihuahua Terrier Mix? Because nothing is predictable about this dog.

In this article, you’ll learn the key differences between each Chihuahua Terrier Mix — and there’s a lot of them!

What Is A Chihuahua Terrier Mix? 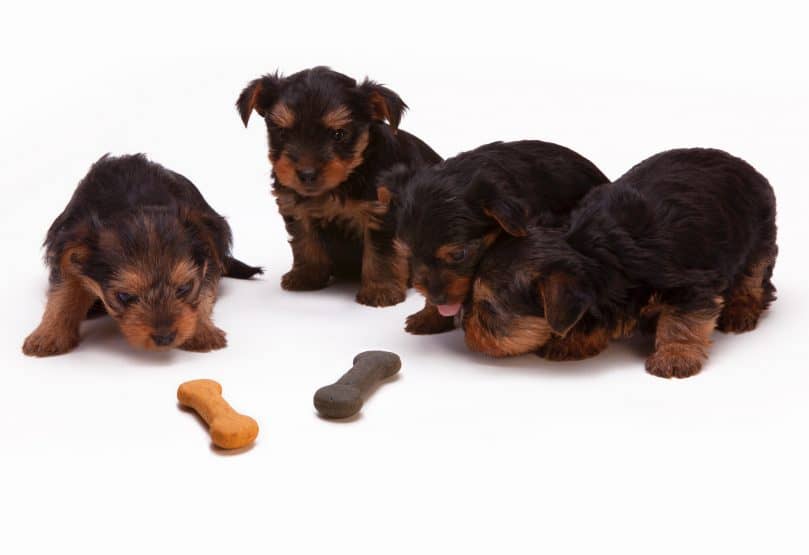 This breed does not belong to a box. There is no standard appearance, temperament, or size when it comes to the Chihuahua Terrier. Even their parents can be different!

The question is, which breed?

There are so many Terriers out there. The American Kennel Club lists over 30 different types on their website.

Before bringing a Chihuahua Terrier breed home, it’s important to find out what kind of Terrier genes it has because not all of them make great family dogs.

Some of them are better for hunting or rat-chasing. Others are playful and prefer human companionship over other dogs. 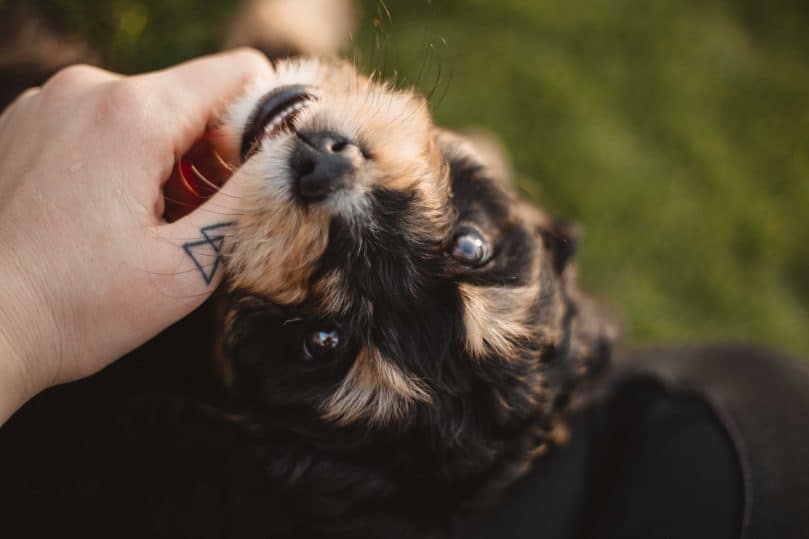 The Best Of Both Worlds

If we’re looking at the big picture, all breeds in the Terrier group are energetic and feisty. They were bred to hunt and kill vermin to protect crops around the farm and home, which makes them good guard dogs.

Chihuahuas, on the other hand, come from an entirely different dog group. Breeds in this category might be lacking in size, but they make up for it in personality.

Toy dogs tend to be affectionate, sociable, and adaptable to different environments and lifestyles. Because of their small size, owners love bringing their Chihuahuas with them everywhere they go.

Surely you’ve seen pictures of Nicole Richie or Paris Hilton carrying their Chihuahuas in their purse. It’s become an iconic look in Hollywood. 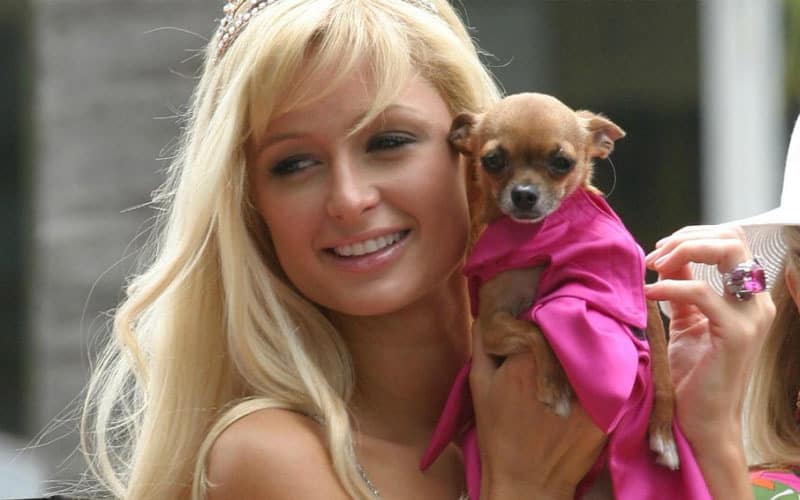 Because the Chihuahua Terrier Mix is a designer dog, many expect them to carry on the personalities and traits of both its parent breeds. Loving, smart, good at hunting, and resilient to change.

The Many Faces Of The Chihuahua Terrier Mix

Because you can’t predict anything about this breed, unless you meet and interact with its parents, it’s important to understand the differences between each sub-breed.

Otherwise, you’ll have no idea what size crate to get, or what levels of exercise it needs, or the grooming requirements. You might train your dog all wrong, which could be a messy situation for you and your home. 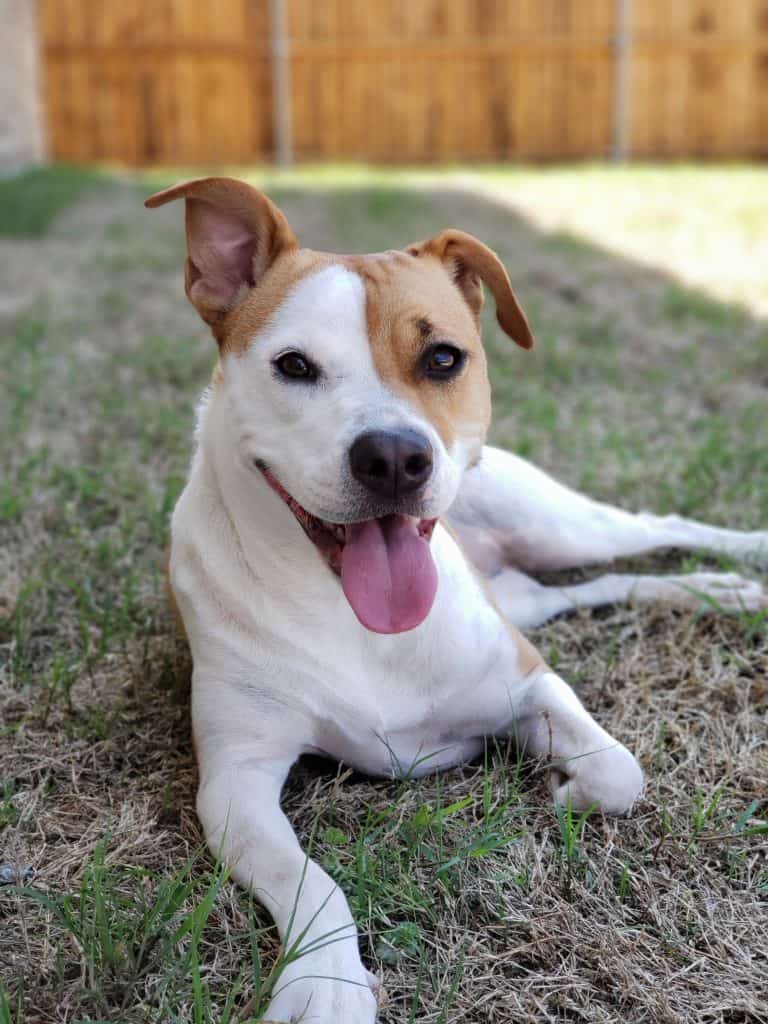 With a nickname like Rat-Chas, you can probably guess what this breed is good for — hunting and killing rats.

The Rat Terrier is considered the all-American working class dog. They’re friendly, social, and eager to please, making them trainable dogs and good with kids.

Because of their small size (about 12 – 18 inches/ 30 – 45 cm), the Rat Terrier Chihuahua Mix can live in an apartment. The only exercise they need is chasing after a ball indoors. Or even a mouse, but hopefully you don’t have a rodent infestation.

With a Rat Terrier and Chihuahua Mix, mental stimulation is more essential than physical, so be sure to buy your dog lots of toys. 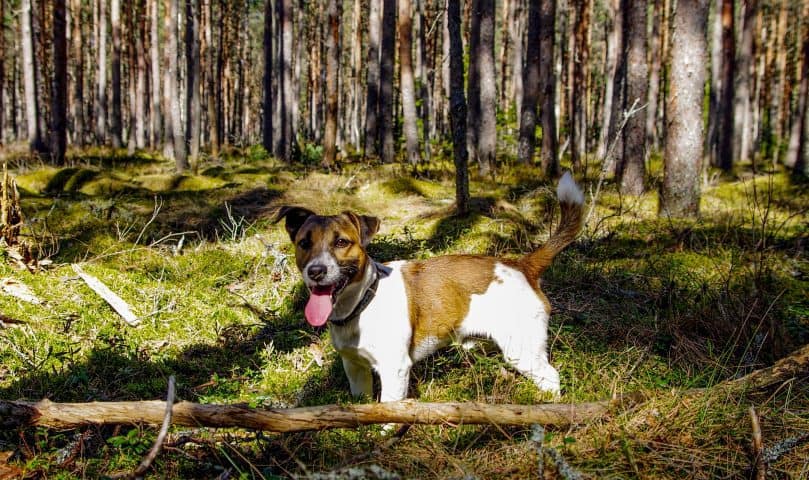 This unique mix requires a patient owner with lots of energy. The Jack Russell Terrier and Chihuahua Mix never seem to get tired, and their one-track mind can only focus on one thing at a time.

This breed is slightly larger than your average Chihuahua and slightly smaller than the average Jack Russel. As mentioned above the maximum size is 25 inches (63 cm).

The Chihuahua Jack Russell Mix has a strong prey-drive, so it’s better suited for owners who don’t have pet rabbits, gerbils, or hamsters around. 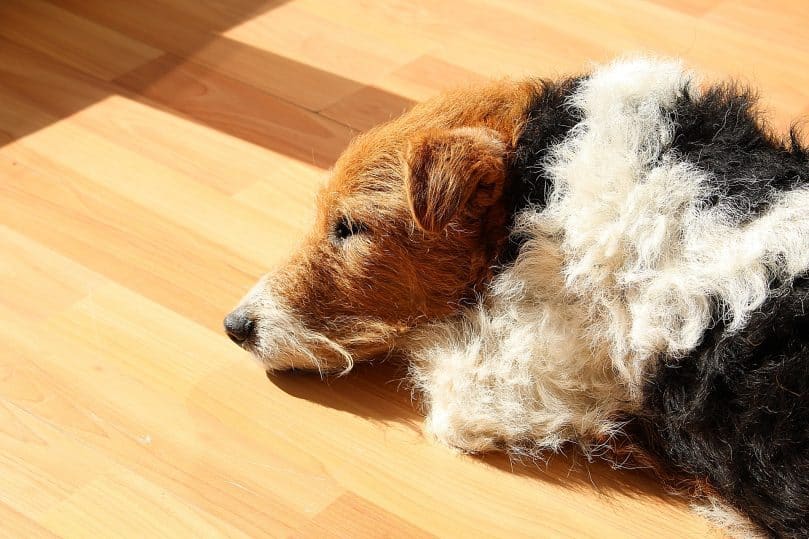 Also referred to as Taco Terriers and Chitoxy, this breed has a long history from the English countryside. The Fox Terrier stood beside many colonels and appeared in hundreds of 15th and 16th-century paintings.

Its muse status could have something to do with the Fox Terrier Chihuahua’s signature wire-haired coat, which makes it stand out amongst the rest of the dog group.

They also have a single coat, so it’s better to keep them indoors during winter or raise them in a warm climate.

This breed loves to be part of the family and frequently attaches wholeheartedly to one owner in particular. The Fox Terrier & Chihuahua Mix is devoted, loyal, bright, and energetic. 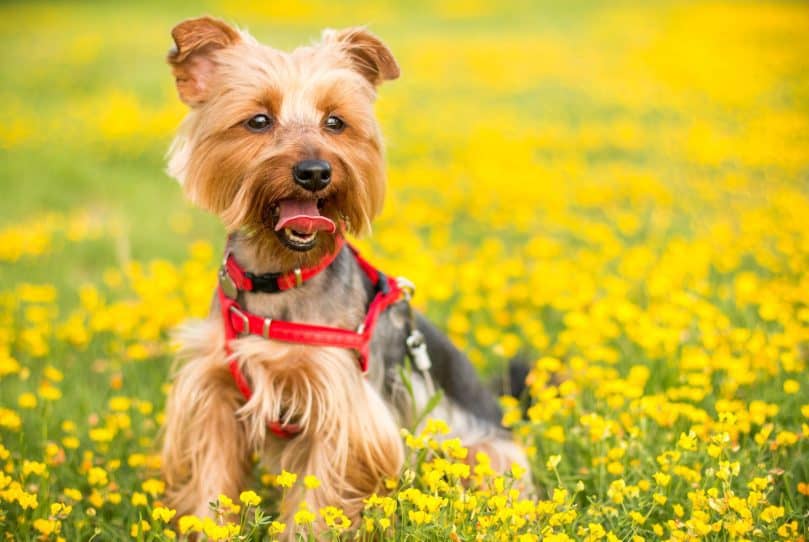 But don’t let their size fool you! This breed carries a strong work ethic, which involves catching mice and always finding something to do. Yorkshire Terrier Chihuahua mixes are busybodies. The last thing they want is a lazy, low-energy owner.

As for their coat, this breed requires daily brushing and grooming due to its thickness. They do better in the cold than the Fox Terrier Chihuahua Mix.

Coat color depends on the dog’s Chihuahua parents and can be black, tan, chocolate, cream, and white. 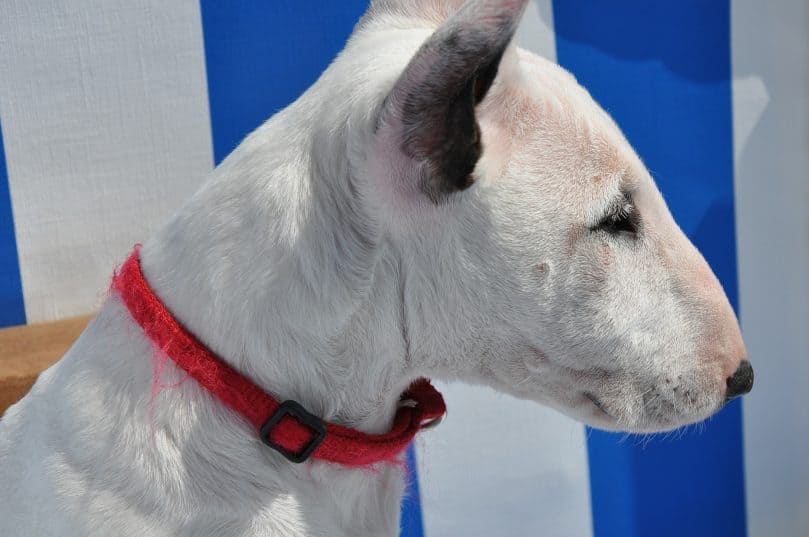 This breed is the most unpredictable out of all the Chihuahua Terrier Mixes, and that’s because a third pedigree line is involved.

Bull Terriers (the Target dog) were bred from old Bulldog breeds from the 19th century that no longer exist, so we’re really talking about the three dogs mixed into one.

With a name like Bull Terrier, you’d expect it to be strong, bigger in size, and intimidating. And you’re right! Centuries ago, the Bull Terrier was used for fighting, which can give the Chihuahua mix a spicy personality.

The Bull Terrier and Chihuahua Mix are loveable and insanely energetic, so it’s not for everyone. This breed is harder to train because they’re mischievous and stubborn.

Another thing to mention is they don’t get along with other pets. The Bull Terrier Chihuahua Mix can be larger in size, and, on top of that, they find training boring and would rather fight other animals. Not an easy mix. 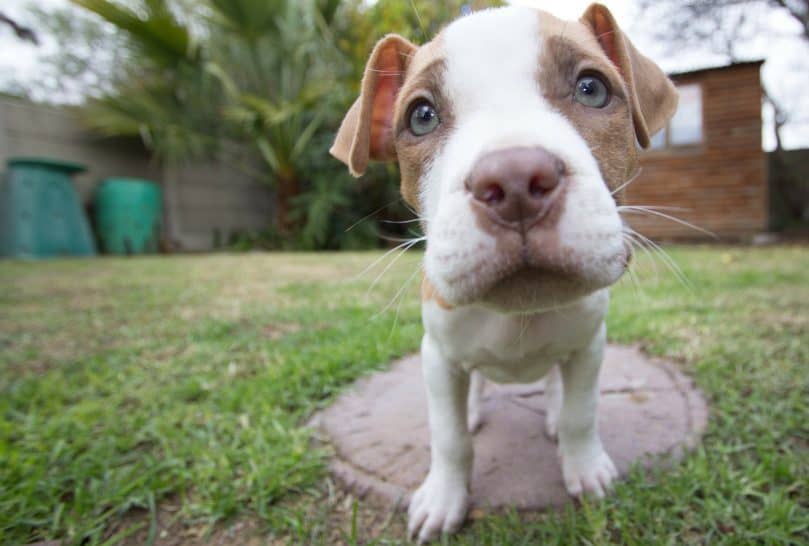 I know, I know, it almost seems too weird that a Chihuahua and Pitbull would mate. Just think of the size difference!

But, it happened, and now we have the particular Pitbull Chihuahua Mix. They have the muscles and beefiness of a Pitbull inside the small body of a Chihuahua.

The Chitpit has an energetic, protective, and courageous temperament. Their sweet-natured personality makes them easy to train unless there are too many Chihuahua genes mixed in.

Bringing this dog home with you should be an easy transition. For the most part, the Pitbull Terrier Mix gets along with children, adults, strangers, and other pets.

As for grooming, this dog sheds moderately and needs a bath about twice month. Also make sure to routinely clip its nails, check its ear for infections, and brush its teeth.

As a general rule of thumb, smaller breeds live longer. Chihuahuas are considered one of the healthiest dog breeds as they can live anywhere between 12 – 15 years.

There’s an ongoing debate about the health of a crossbreed versus a purebred. Research suggests that mixes, including the Chihuahua Terrier, have a greater chance of having at least one disorder.

These dogs are prone to luxating patellas (a trick knee), hydrocephalus (an issue with the heart ventricles), heart disease, and tracheal collapse.

Because this breed tends to be so small, their hearts have to work that much harder. Most Chihuahua Terrier Mixes have to be handled with care. Their bones are easily broken.

If you have rowdy or overly-curious children or pets at home, it could end in tragedy. Please do not accidentally sit on your dog. 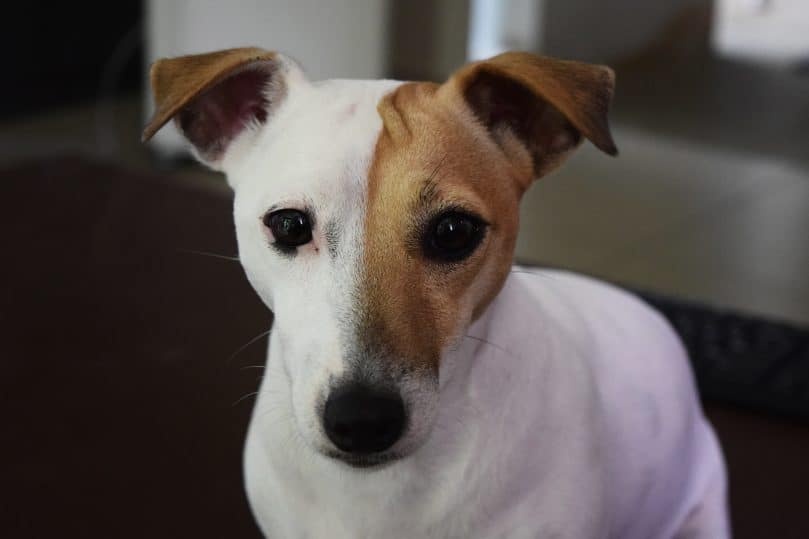 We’ve all come across an annoyingly yappy small dog in our lives. The one who thinks it can scare off a Rottweiler. Remember we said how the Toy group comes with a big personality?

Yorkshire Terriers, in particular, make the top 10 in loudest breeds. They bark. A lot. Something to keep in mind when shopping for a Chihuahua Terrier Mix as your neighbors might complain.

Also, all Chihuahua Terrier Mixes shed to some degree. Chihuahuas on their own fall into the middle-shedding category, so they are not considered hypoallergenic. Be prepared to sweep the apartment more than usual in summer and winter.

As a puppy, the Chihuahua Terrier Mix is often scared of children and needs to be socialized at an early age. Otherwise, the yappy-ness can get out of control.

See how your puppy could stand out in a crowd and get along with other dogs.

I Want A Chihuahua Terrier Mix, What’s Next?

If you’re ready to take that leap of faith, it’s time to find a reputable breeder or adoption site. Chihuahuas are the 4th most popular dog in the world, which means it won’t be hard to find mixes out there.

Because there’s such a high demand for Chihuahuas, steer clear of puppy mills who will try to sell you a dog for super cheap. Don’t do it.

Please be patient when it comes to adopting or rescuing a Chihuahua Terrier Mix. Small dogs, in general, need to be kept with their parents until at least eight weeks old. If separated early, Toy breeds are likely too small to survive on their own.

Is The Chihuahua Terrier Mix Right For You?

As you can see from this wide variety of information, this breed cannot be contained in one box. Not all Chihuahua Terriers love children, or enjoy training, or require daily grooming. Each breed is its own case.

One thing all Chihuahua Terrier Mixes have in common, though, is they all crave companionship and are highly energetic.

If you’re picky about dog breeds or live a laid-back lifestyle on the couch, this dog is not for you.

But if you’re open to surprises and watching your puppy come into its own, the Chihuahua Terrier Mix is a good fit.

Comment below if you’ve fallen in love with this diverse pup!