The Corgi Chihuahua Mix (AKA Chigi) Might Just Be Your Dream Dog! 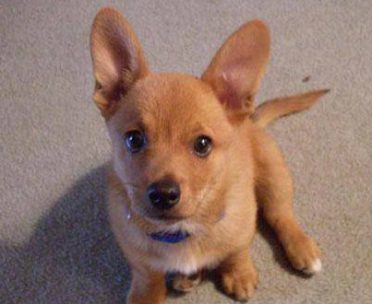 Corgi Chihuahua Mix is a cross of Pembroke Welsh Corgi and pure Chihuahua also known as Chigi or Chihuahua Corgi mix. This crossbreed is relatively short around 6 to 12 inches and can weight about 10 to 20 pounds. The average lifespan of a healthy raised Chigi is between 12 to 16 years.

If you’ve been on our site before, you’ve probably seen a lot of different Corgi mixes.

This purebred seems to be a popular choice in cross-breeding, which brings us to the adorable Corgi Chihuahua Mix, also known as…

By the end of this article, you’ll be able to tell if Chigi puppies are the right breed to take home.

We’ll go over the traits and characteristics of this unique crossbreed so that you can make an informed decision before buying man’s best friend. 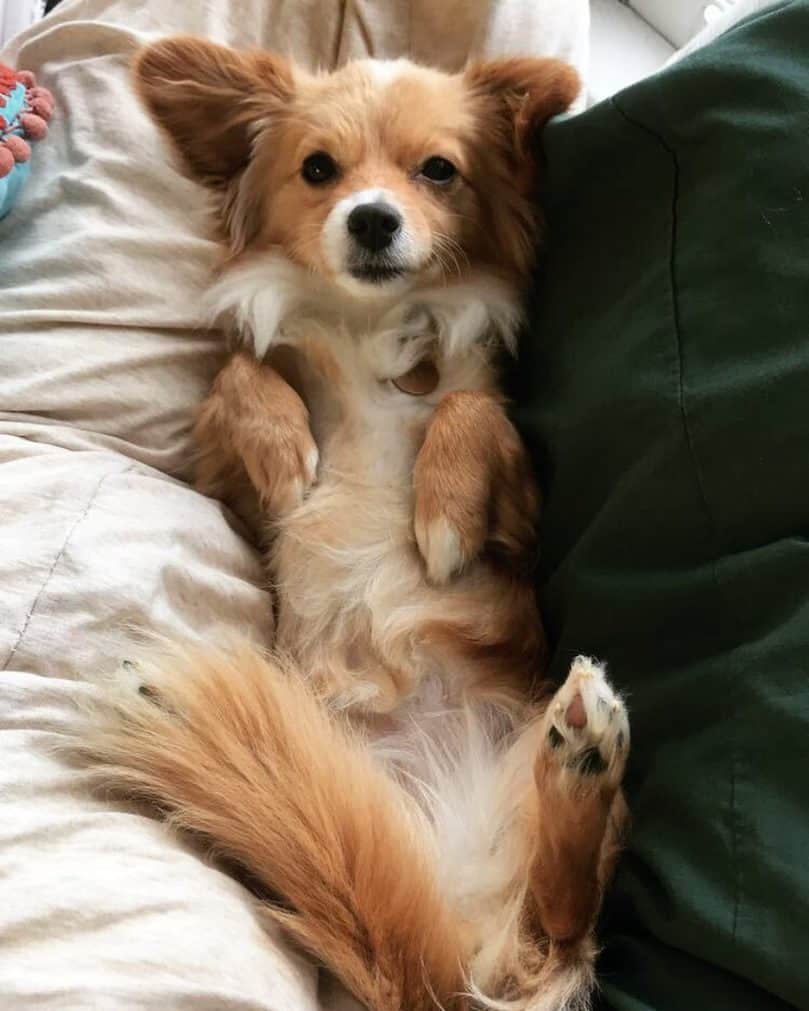 Say Hello To The Corgi 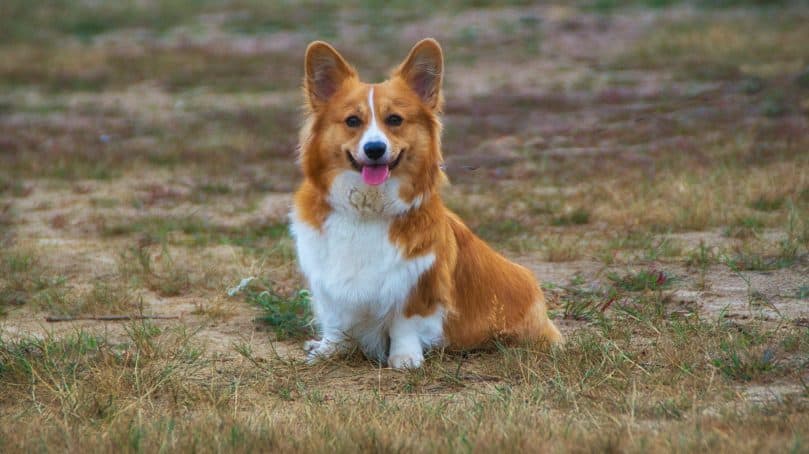 You can’t miss a Corgi when it walks by with its cute, fluffy butt, bat ears, and striking bright orange coat — but its long back is this dog’s most distinctive feature.

The most common coat color combination in the Corgi is orange and white, but it can also be found in shades of brindle, sable, and blueish silver.

One look at the cute Corgi is enough to make anyone want to buy it, but little do people know that this breed comes with some serious health illnesses.

The biggest one is intervertebral disc disease, which left untreated, can cause muscle spasms and extreme pain in the spinal cord.

It may also experience epilepsy and hip dysplasia, which are common in breeds across the board.

If you are truly passionate about this breed, make sure you have the finances to pay for potentially expensive medical bills should a back injury arise.

Also, keep in mind that the Corgi sheds and is not “hypoallergenic.”

Do The Cha Cha With The Chihuahua 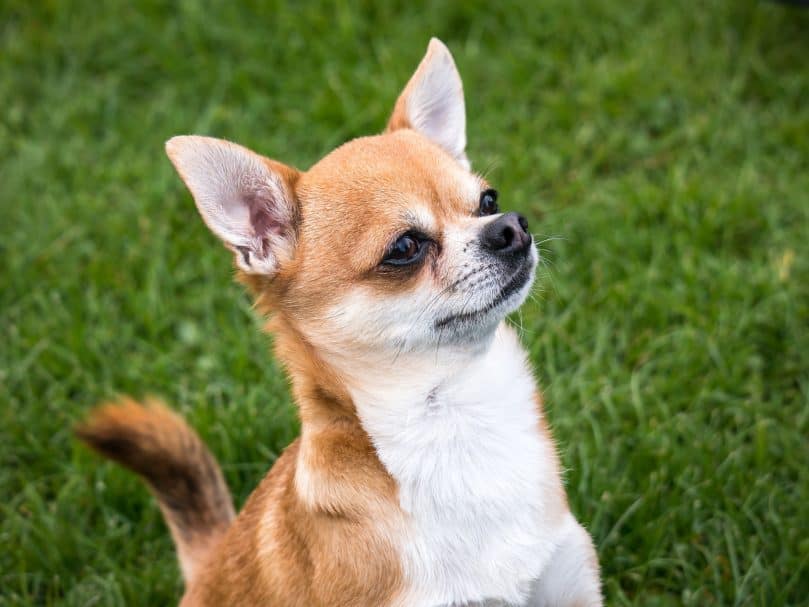 People often say that the best things come in little packages, which could not be more true about this breed!

The national dog of Mexico, the Chihuahua has become a popular pet choice amongst celebrities because of its small and portable build.

Paris Hilton, Nicole Richie, and Lindsay Lohan have all carried this dog in their purse while running around Hollywood.

The Chihuahua ranks as the fourth-most popular dog in the world, right under the Poodle, German Shepherd, and Labrador Retriever.

This dog comes in a variety of coat colors with two length options (long-haired vs. short-haired).

Remember the different coat lengths when it comes to grooming the Chihuahua Corgi Mix.

Another bonus to the Chihuahua is that it’s considered a healthy breed overall.

It does come with some minor health issues like hypoglycemia (low blood sugar), patellar luxation (kneecap problems), and tracheal collapse, all of which are common in tiny dogs.

This breed sheds year-round and is therefore not considered “hypoallergenic” either.

The Truth Behind The Mini Chihuahua 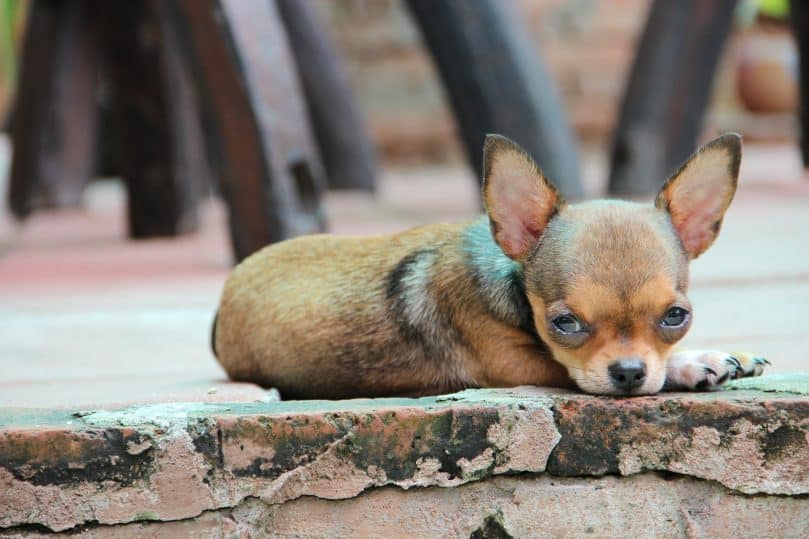 Before we jump into the Chigi, I was to discuss the rumors surrounding the alleged teacup or mini Chihuahua.

There is no such thing.

The words “teacup” or “mini” are a sneaky marketing tactic used by breeders to get more money out of you and attract new customers.

But in reality, they just charge you extra for a normal Chihuahua that so happens to have slightly smaller measurements (the runt of the group, you might say).

The mini Chihuahua is not a breed — not even a version of the original breed.

Don’t go looking for one because you might end up being tricked!

First Impressions Of The Chigi 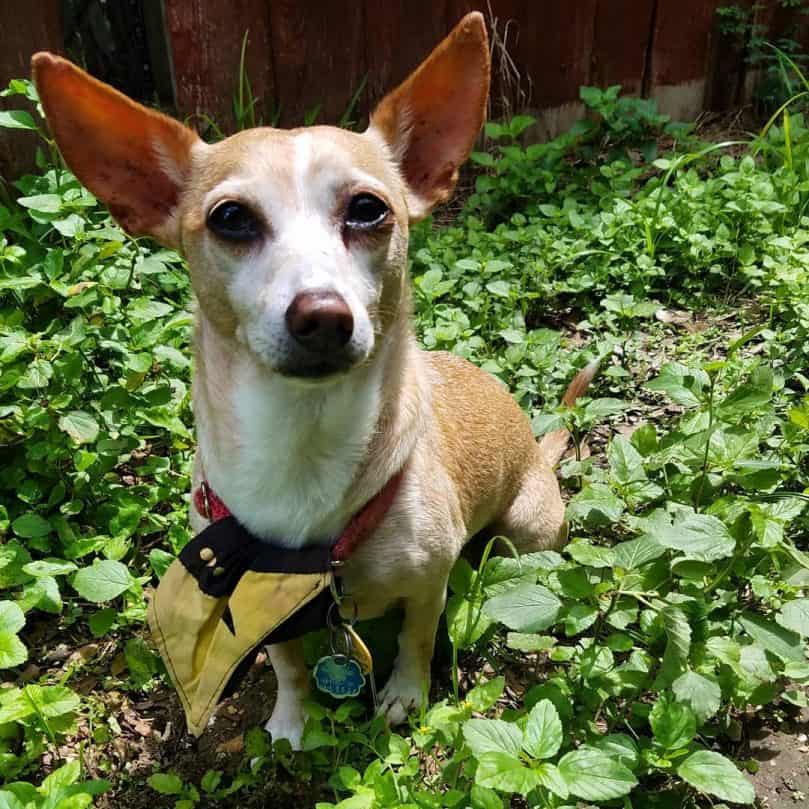 Based on what we’ve learned about this parent breeds, we can make the following predictions about the Corgi Chihuahua Mix.

In terms of body shape, this crossbreed usually has the longer back of a Corgi with the round, circular eyes of a Chihuahua.

The ears of this mix are almost always stiff just like both of the parent breeds.

The coat colors of the Chihuahua Corgi Mix vary from cream to orange-ish brown (mostly in the neutral spectrum).

I noticed many people were looking for a black Chigi since purebred Chihuahuas can be all-black, but it seems this color gene gets lost in the cross-breeding process.

Any health issues we saw in the parent breeds can arise here as well.

Watch out for intervertebral disc disease and epilepsy. Hypoglycemia is less common since the Chigi isn’t as tiny as the purebred Chihuahua.

The lifespan of a Corgi Chihuahua Mix ranges from 12 – 20 years thanks to the Chihuahua’s impressive health. 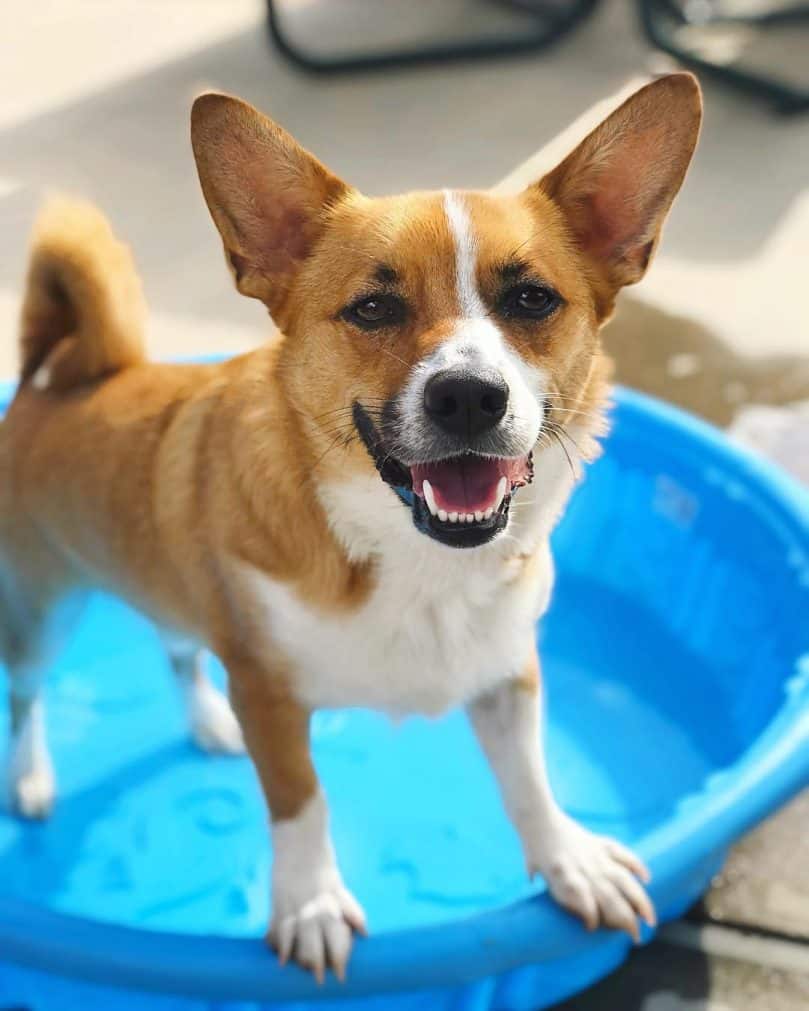 You Get A Best Friend For Life

Out of all the Corgi mixes, the Chigi is one of the most social and loving amongst children, adults, and even strangers.

If young children are in the house, make sure they don’t mishandle the super-tiny Chigi puppies as they’re extremely fragile.

The Corgi Chihuahua Mix also gets along well with other pets. Dogs, cats, birds — you name it!

The temperament of a purebred Corgi is friendly, outgoing, and playful.

Just watch out for their protective and bold side as this breed is not afraid to get in your business and make its presence known.

The personality of a Chihuahua is lively, devoted, and courageous.

This is an active dog with quick reflexes that loves to run around and bounce off the walls.

When it comes to living with larger families, the Chigi is considered a one-man dog, meaning it builds the strongest bond with just one person but still loves everybody.

Watch how well this cross-breed gets along with children — this is Copper!

Playtime With The Chigi

The Chihuahua Corgi Mixes makes for a great apartment dog as it can live in any sized home.

It’s happy to run around and play inside all day, so it doesn’t need to go outdoors very much except for a quick bathroom break.

Although, it’s still recommended to take this mix for a daily walk — but it can be a short one (about 15 – 20 minutes).

The Chigi also loves exercising at the dog park where it can be social with other pups and people.

This Dog Sounds Too Good To Be True…

All purebreds and cross-breeds have their own list of cons, including the Chigi.

The Corgi Chihuahua Mix does not make a good guard or watchdog. In fact, it would rather lick a robber than bark at one.

This mix is not very outdoorsy, either. Its small size wasn’t built for long hikes or fighting against the current in the water.

Purebred Corgis can’t swim but Chihuahuas can for short periods of time as long as they’re supervised.

Because the Chihuahua Corgi Mix loves human companionship, it doesn’t do well alone for hours on end.

It needs an owner that either works from home or has a flexible schedule.

This mix might not be the easiest to train since it may inherit the Corgi’s natural stubbornness.

Lastly, the Chigi sheds year-round and is not “hypoallergenic” or the best fit for owners with allergies. 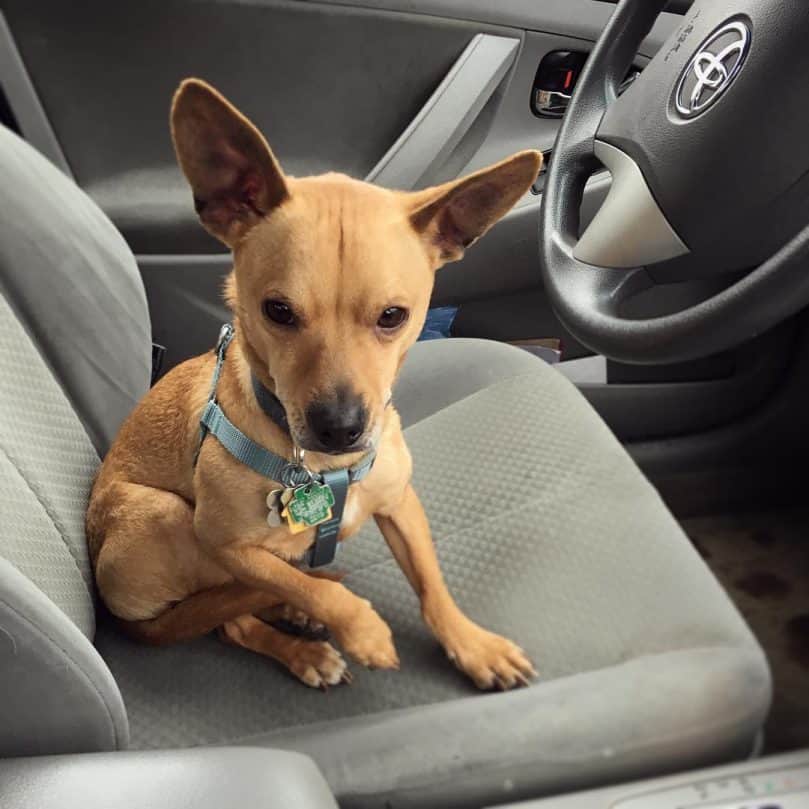 Caring For The Corgi Chihuahua Mix

If your Chigi is born with a longer coat, it needs brushing 3 – 4 times a week.

Shorter-haired mixes need brushing once a week, making this a high maintenance dog in terms of grooming.

The Corgi blows its coat twice a year in the Spring and Fall, so except more sweeping around the house during that time.

The Chigi only needs bathing every 3 – 4 months as to not dry out its coat and remove the natural oils that keep it fluffy and shiny.

For feeding, the average mix needs 1 cup of food per day divided into two meals. Regular dry kibble should be just fine.

This Dog Is Looking For A Home 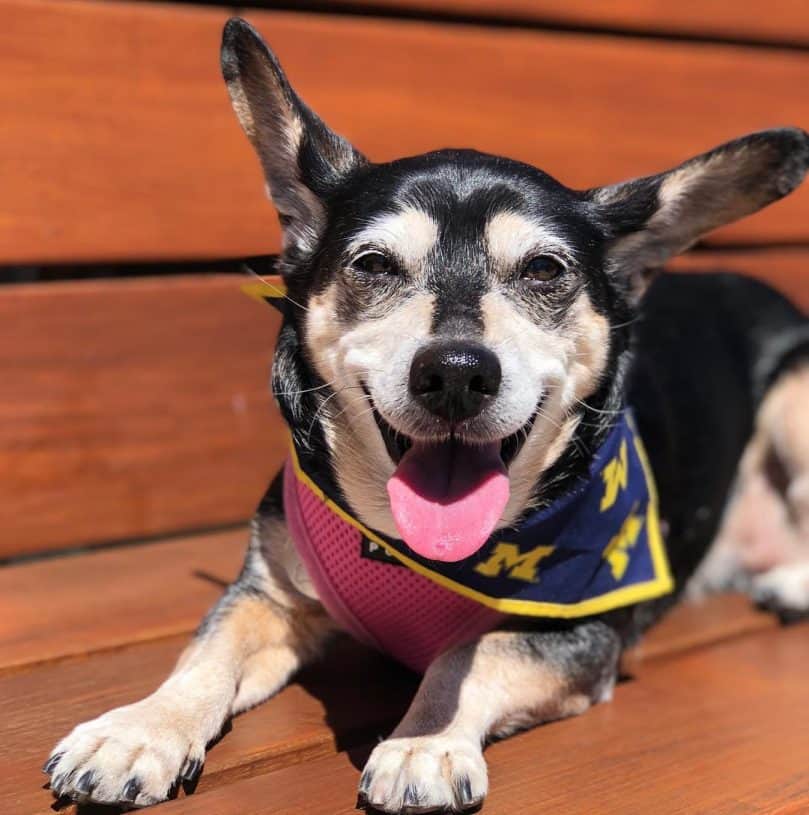 The cost of a Chigi ranges drastically from $300 – $1000. The more expensive it is, the more Corgi genes are mixed in.

But whatever you do, do not get fooled into paying more for the fake mini Chihuahua.

There’s no teacup Chigi, either.

If you’re looking to adopt or rescue a Corgi Chihuahua Mix, check out Puppy Finder, Adopt A Pet, and the ASPCA.

I haven’t found any official breeder websites for this mix, but you can always search for purebred Corgi or Chihuahua kennels.

Is The Chigi Your Perfect Match?

The right owner for this dog is someone who spends a lot of time at home, loves being social, and has extra money to spend on emergency vet bills.

The wrong owner for this mix is someone who was allergies, doesn’t like constant shedding, or spends most of their time at the office.

Comment below if you think the Corgi Chihuahua Mix is your favorite cross-breed!

3 replies on “The Corgi Chihuahua Mix (AKA Chigi) Might Just Be Your Dream Dog!”