Home » Dog Health » Can You Declaw A Dog?

Can You Declaw A Dog? 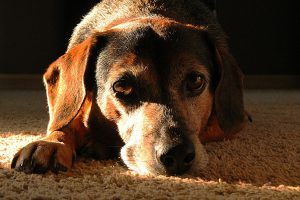 No. Declawing your dog doesn’t just mean to cut its nails, but it means to cut off the end of the toe permanently to remove the nail. Dogs need their toes to help their walking in balance and grip. Performing this surgery, and declawing your dog, is considered animal cruelty, and prohibited in many countries.

First of all – this procedure is mainly used for cats. And second, because there’s no actual reason why someone should make a pet go through all that pain. I’ll explain to you below why I’m saying this.

What does it actually mean to declaw a dog?

The operation is also called onychectomy, and it’s not just removing your pet’s nails, as many people might think. When declawing your cat or dog, the vet is removing the end joints on each toe – think of it like someone cutting the ends of your fingers off just to keep your nails from growing. Some specialists thought it could help cat owners, but they didn’t consider this surgery for dogs.

Dogs and cats have different anatomy, so even if this procedure was appropriate for one pet (which it isn’t!), it doesn’t mean that it’s appropriate for the other. Furthermore, the American Veterinary Medical Association says that declawing a cat should be considered major surgery and recommends vets not to encourage such procedures in the absence of serious health conditions.

Declawing means putting your dog through a lot of pain, maybe even more than pain killers can control. I’ve also found an article where it states that this procedure can cause arthritis, spinal injuries, and deformities – so there seems to be no scientific reason to support declawing dogs.

For Your Information: If there’s no veterinary medical situation, such as tumors or severe infections, declawing is forbidden in over 20 countries, including Australia, New Zealand, Brazil, Israel, Finland, Sweden, Netherlands, and Germany.

What about the dew claws?

Dew claws are what most breeders call the dog’s “thumbs.”. Depending on the breed, dogs have dew claws on the inside of the front leg and, in more rare cases, on the hind legs. Many breeders remove them when puppies are just a few days old, as they consider these claws responsible for a series of injuries. However, I see this as an old practice, which has little or no scientific reason.

Dr. Christine Zink, DVM, Ph.D., DACVSMR, has written an interesting article on this topic, where she explains how important dew claws are, and why breeders or vets shouldn’t remove them for preventative reasons.

Some breeders refuse this practice, too. Donna, from Endless MT. Labradors, explains why she’s never removed the dew claws of her dogs:

In most cases there’s no reason to remove your dog’s nails. If your think she could harm your kids or damage your floors or furniture, you should know that there are safer alternatives that don’t involve pain or surgery:

With so many ways of controlling a dog’s behavior, it’s useless to go for such drastic solutions just to keep our furniture safe. So, I wouldn’t have claws removed from any of my dogs unless one or maybe two vets recommend it.

What do you think about this procedure? Has your dog ever had problems with her dew claws? Leave a comment and share your opinion on this topic.